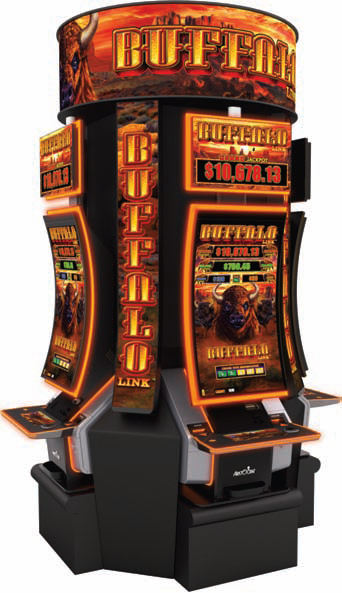 This has been Aristocrat’s hot release of the year, drawing on the main features of two of company’s most iconic brands, Buffalo and Dragon Link—itself a sequel to Lightning Link, the game that pioneered the “Hold & Spin” game mechanic now being featured by most slot manufacturers in one form or another.

The game, presented on the MarsX Portrait cabinet, uses the well-known free-spin round and other game features of the Buffalo brand, and adds new features like 2X and 3X wild multipliers and a mystery “must-hit-by” bonus that awards either the Hold & Spin feature or free games, as well as a four-level jackpot consisting of two static awards and two progressives.

The base game is a five-reel, 1,024-ways-to-win format, The game features a a bonus called “Buffalo Free” for collecting Buffalo symbols during the base game, free-spin and Hold & Spin features. During all phases of the game, a meter logs the Buffalo symbols collected. A Buffalo Free jackpot is returned before the meter reaches 1,800.

The Free Games feature is the familiar free-spin round from the original Buffalo with re-triggers, plus 2X and 3X multiplying wild symbols.

Eight or more Buffalo symbols on the screen trigger the Hold & Spin feature. The triggering symbols reveal credit awards and hold in place for three spins, during which any additional Buffalo symbols lock in place and return the bonus spins to three. The Buffalo symbols can also reveal three of the four top prizes—static awards of $20 (Mini) or $100 (Minor), or the secondary progressive resetting at $750.

The feature continues until three spins without Buffalo symbols, which awards the cumulative credit and progressive awards, or until the entire four-by-five screen is filled with Buffalo credits, which awards all credits plus the Grand Jackpot, which resets at $10,000.