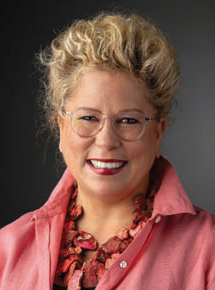 By one definition, casino management systems are digital banks—complex technical systems that capture billions of bytes of customer data, which in turn informs a company’s sales, marketing, operations and loyalty strategies.

By another definition, they’re communications tools, part of an ongoing conversation between a property and its patrons.

Both definitions are accurate. But in Kelly Shaw’s view, one may be truer.

“Casino management systems originally were hyper-focused on data—it was all about accounting and auditing,” says Shaw, vice president of games and systems sales for Aristocrat North America. “But for me, it’s always been about relationships, partnerships and people.”

As the driving force behind Aristocrat’s Oasis 360 solution, Shaw and her team serve some 300 clients in the U.S. and Canada. “Yes, we do sell software technology,” she says. “Yes, it’s technologically complex. But this is about deep, long-term partnering, listening to our customers and building solutions so they can listen to theirs.”

As more casinos move to the resort model with greater emphasis on non-gaming attractions, these solutions must be all-encompassing, she says: “meeting patrons on- and off-premise and on digital channels, capturing player profiles and consumer preferences, whether they’re at a restaurant, shopping, playing golf or visiting a spa.”

The Milwaukee native credits her success to adaptability, which she learned early. Her father was in international mining sales, and the family roved the world, including Africa, Asia and Europe, before circling back to the United States (growing up in Peoria, Illinois, Shaw spoke English at school and French at home).

“I was always the new kid in school, always had some change going on,” she says. “It set me up to be flexible and positive, and to embrace change.”

She went on to study business at Eastern University, Columbia and Stanford, and in 2001, joined Aristocrat as general manager of systems sales. She’s been on the ascent ever since, and is excited to see what the future holds, in 2019, 2020 and thereafter.

“‘Bricks and clicks’ is the next evolution. As the demographic evolves and gets younger and more sophisticated, our customers are thinking about how to drive their digital engagement strategies. We’re making sure at Oasis Aristocrat that we’re building that bridge between brick-and-mortar facilities and the digital side, keeping the experience, engagement and loyalty consistent and strong,” Shaw says.

Asked about speculation that Oasis 360 will soon be available in Asia, Shaw says, “Aristocrat is a global company, and we’re always strategically evaluating opportunities to scale and globalize, so that’s something we’ll continue to review.”

Meanwhile, she points out, the company is in growth mode, relocating to a new campus in Summerlin and actively recruiting across all business lines.

“It’s true we have great product, but without an amazing culture, I don’t think you can be a dominant force in any business. There’s a lot of focus by my boss Matt Wilson (managing director for the Americas) and our CEO Trevor Croker to make sure Aristocrat is the employer of choice. I built my career here and I want more people to come and experience that.”