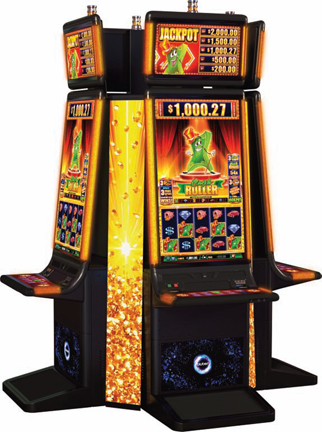 When Andrew Burke agreed to leave his longtime position at gaming supplier AGS to take the helm as CEO of Canada’s Bluberi Gaming, he was joining a company he knew well. AGS, where Burke had spent nine years rising to the position of senior vice president, slot products, had been the exclusive distributor in North America for the Canadian company.

“I’ve known Bluberi for a very long time,” says Burke, who became Bluberi’s CEO in January. “They created some of the most iconic and enduring Class II games in the industry—Royal Reels, Cool Catz, Liberty 7’s, Diamond Lotto—and I became familiar with the company through that.”

But there was more familiar to Burke with Bluberi than just the games. The supplier, based in Drummondville, Quebec, bears some striking similarities to the AGS that Burke joined in 2010—a small, mainly Class II game supplier serving Native American markets, poised to expand into Class III thanks to the backing of a private equity firm that had acquired the company.

“All of those things were positives for me, but I believe the thing Bluberi has always had is a strong development team,” Burke says. “Here, we’ve got a talented team with a history of building great products. Bluberi has that technology and creativity, and also desire. The team in Drummondville has a ton of desire to really take this to the next level.”

Burke adds that his years of experience working with an emerging company that grew into an international supplier of slots, table games and interactive systems are an advantage that he brings to Bluberi. He hopes to use the head start he has with the Bluberi team to effect the same kind of growth for the company as it continues to spread its footprint in Class II markets in the U.S., as well as penetrating Class III markets.

While some initial changes are taking place at Bluberi, the creative foundation of the company will remain intact. Corporate headquarters, administration and finance functions, sales and manufacturing are in the process of being moved to Las Vegas. However, the R&D function will remain in Drummondville.

“There’s a group of about 80 people in the office there,” Burke says. “It’s a team that’s worked together for a really long time. We’ve appointed Benoit Lapolice as senior director of product development. He’s working hand in hand with Steve Houle, our director of product management, and Carl Nadeau, director of game development. They are going to be the central focus of R&D, and I’m really excited about some of the games we’re building up there.”

Burke says game development didn’t miss a beat during the recent industry shutdowns. “We pivoted quickly; nobody wasted any time,” he says. “They brought all of their equipment home, our IT department really got on the ball fast, we implemented online collaboration and project management tools, and started having a new rhythm.

“We have not wasted this time. It’s important for us to play offense, so we did not furlough R&D. We kept everything going, working on new games that will propel us into 2021.”

Bluberi is now expanding into Class III markets in the U.S., but Burke notes that Class II games are still the company’s bread and butter. “We’re making sure we’re using all the licenses we have—we have over 100 gaming licenses,” he says.

“There are very few companies that build a product that is solely Class II. And that will differentiate us, because there are so many companies that will just take a Class III game, port it into Class II and say there you go. But there’s a real art to building great Class II games, and we have the team and the talent and the experience to build great ones. I want to keep doing that.”

According to Burke, while licensing in major commercial gaming jurisdictions like Nevada and New Jersey are long-term goals, the company is currently concentrating on spreading its footprint in more Native American markets, both Class II and Class III. “We’ve got games in California, but only a small footprint in Oklahoma,” Burke says. “We are working on licenses in Arizona and New Mexico. There is a lot of white space in front of us, and we plan to focus our immediate efforts on tribal markets. Our new progressive controller, for instance, was recently approved to Nevada standards, opening a lot of new markets to us.”

Some of the games Bluberi is introducing to those markets are unique in many ways. For instance, the company’s legacy game style, presented on a dual screen, includes displaying the complete pay table on the second screen of the machine. “Most games in the market use that space for other features,” notes Houle. “Here, the pay table is up front— easy-read access, right in the line of sight of the player.”

Another unique feature is the betting setup. Rather than having a line of wagering buttons for different per-line wagers, there is a fixed bet tied to the number of paylines. For a nine-line game, the fixed bet is nine credits: for a 20-line game, 20 credits, and so forth. The buttons on the front panel are used to choose from multiple denominations. Since each denomination shows its own progressive jackpot, the player can easily see which one is the most appealing and decide which one to go after.

In Bluberi’s nine-line and 20-line games, all lines pay by combinations running both left to right and right to left. When there is a free game feature, every free spin is a guaranteed winner. “Free spins are a frequent and quick feature—three exciting spins where the player always wins,” says Houle.

Current Bluberi games are being produced for both Class II and Class III markets, plus the Washington state TLS video lottery market, where the supplier has a strong presence.

Among this year’s standout games is Lunar Celebration. Released this summer, the game is themed around an important Asian holiday, the Lunar New Year. The theme is communicated through glowing colors, firecrackers, red lanterns, dragon masks and other icons of the holiday’s festive atmosphere—enhanced by 4K graphics on the Novus Series b49 cabinet, with its 49-inch flat-screen monitor. The game features free spins with guaranteed wins, a scatter bonus of up to 500 times the denomination, and a bonus wheel, around which a rocket flies until landing on a wheel slice, awarding credits of up to 1,500 times the denomination.

Among this year’s other standouts are Lunar Feast and Fortune Feast, both available on either the Novus b27 series or b.POD cabinets.

On the b.POD and Novus b49 cabinets is Cash Roller, a fun game centered around a top-hatted cash character. In addition to guaranteed-win free spins, the game features a pick-three bonus that can net credits, or a progressive bonus feature called the “Jackpot Machine.” In this feature, the screen displays giant reels which spin to credit awards or a progressive jackpot.

Burke, meanwhile, is working on defining a new corporate culture for the company.

“In the first months I’ve been here, we’ve said, what do we want to be? What is a Bluberi game? How do we define that? What does it mean to put out a Bluberi game?” Burke says. “Historically, we’ve been very good at nine-line and five-line products that are a little bit different, and I think our art and animations have always stood out. I think as we shape our identity, you’re going to see that come through.”

In addition to developing the company’s culture, Burke says his main goal for 2021 is to provide top service to Bluberi’s customers. “The overarching thing I keep coming back to is that I want to be the easiest company in the industry to do business with,” he says. “That includes how we deal with each other internally, how we deal with customers externally, and setting up the company in 2020 to be ready in 2021 to take advantage of all that. And I feel we’re checking every box and making progress.”

And Burke’s five-year plan for Bluberi?

“My vision is for Bluberi to be a data-driven, human-run company. Along with being the easiest company to do business with, we want to create high-quality games and foster a unique and engaging culture. If we get all those things right, success will follow.”