WMS keeps on rolling with two versions of the new Blade cabinet, and a wealth of new games 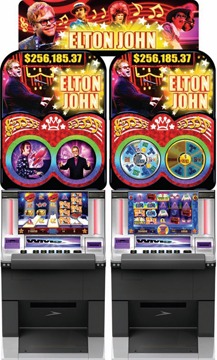 Slot manufacturer WMS Gaming has a new owner this year, its parent WMS Industries having been acquired by lottery giant Scientific Games. Next year, it will have a new sister company, when Scientific Games completes its acquisition of slot and table maker Bally Technologies.

But at Roscoe and North California Avenues on Chicago’s North Side, it’s business as usual. Operations at the WMS Chicago Technology Center, opened just two years ago, have not missed a beat. The expanded facility, built on the bones of what had once been the Williams pinball factory, has remained the cradle of all WMS innovations on the slot floor, and according to Allon Englman, WMS senior vice president and chief design officer, new ownership has not interrupted the flow of ideas.

Englman says the only outward difference in Scientific Games ownership is that his group reports to the new CEO of the parent company’s gaming group, William Huntley. The acquisition itself, he says, has only added to the effectiveness of game development. “Scientific Games is a very global company,” Englman says, “and they are encouraging us to think more globally, as opposed to just a North American focus.”

But the company’s vaunted R&D in all game areas for its casino slot line remains as effective as ever, with longtime engineers and game designers continuing the creative burst that had WMS on a business surge long before last year’s acquisition.

The stars of the G2E show for WMS will be a remarkable collection of licensed brands—both new branded games and new entries in longstanding branded game groups.

And the supporting stars for all the new games is a new line of cabinets launched last spring called “Blade.” Early this year, WMS released the first games on the mechanical reel-spinning version of Blade, and several high-powered releases at G2E are the direct result of maximizing the strengths of the Blade stepper cabinet, according to Englman.

The Blade s23 cabinet is designed for maximum attraction—to catch the player’s eye. It builds on the popular features of WMS’ high-performing upright Blade cabinet and for-sale theme content that already has a proven performance record with players.

The Blade s32 features two 32-inch screens in the style of what Englman says is the WMS “Metascreen” technology—high-definition displays that deliver a premium, high-impact effect to the slot floor. The cabinet comes with an exclusive content library.

Englman says this year’s G2E show will be about populating those new cabinets with content, but also about the capabilities of what is perhaps its most popular cabinet of the past two years, the Gamefield xD.

The highlights of the show, he says, start with the game he predicts will be one of the show’s major hits.

What Englman calls the “next generation of Gamefield xD” will launch with the newest WMS brand, “The Flintstones.” Based on the iconic prime-time animated comedy series from the 1960s, the Flintstones slot machine mines the long-running show for all the funniest moments of Fred and Barney, the Stone-Age suburban workingmen who got laughs in the tradition of Ralph and Ed from The Honeymooners.

The Gamefield xD format normally consists of one 32-inch portrait monitor in front of the player horizontally—not unlike a pinball machine—with another 32-inch screen forming the vertical top box, to create a giant, interactive “game field” on which animation can extend seamlessly between top and bottom screens. In this “next-generation” version, the top screen is actually two horizontal monitors with a spinning wheel in the middle.

The format is used to great effect in the various bonus events gleaned from the long-running cartoon show. The player hears the familiar theme song during base-game reel-spinning, which is punctuated by mystery wilds as characters walk across the screen. One bonus features an expanded reel set; another features Fred at work in the quarry, on his dinosaur.

There is a “Dino Bonus,” which is a spinning of the bonus wheel accompanied by video clips of the pet dinosaur on top of Fred greeting him after a hard day’s work. And of course, there is a “Bowling Bonus.” The player gets three balls to roll for Fred and Barney in one of the famous bowling scenes from the show—Englman says there literally hundreds from which to choose, most of them hilarious.

Another highlight in the branded games is “Elton John,” a video slot featuring the famous rocker packed with mystery bonuses, multipliers, wheel spins and audio clips booming the legendary entertainer’s biggest hits through the WMS Sensory Immersion 2.0 chair. “We had great music and great iconography to work with,” Englman says.

The Elton John game features a clever adaptation of the Blade video cabinet—a giant pair of glasses is positioned over the top screen, with wheel spins and other bonuses inside the lenses. Bonuses include “I’m Still Standing,” in which blank spots in the reels are filled by wild symbols as that song plays; the “Saturday Night” wheel-spin bonus, and a random “Rocket Man” bonus.

Other highlights among the WMS branded video offerings are two licensed games in specialty formats, “Mad Men” and “Battleship.”

Mad Men, based on the popular AMC period show about Madison Avenue advertising executives in the 1960s, features a cabinet with a huge reel in the center, formed by a curved LCD monitor. Bonuses and animated video appear on the big reel. In the main bonus, every time a win registers that is five times the bet or more, the top reel activates, and the player picks from cocktails on the screen to spin the reel and enhance the win.

“Battleship” is a take on the famous board game that is different than any of the several previous slot incarnations of the theme. It is the first time WMS has used a licensed brand in its Colossal Reels format, which adds an oversized, 12-symbol reel set to the standard reels with stacked symbols and wilds over the entire field.

WMS has themed this Battleship game around the famous pinup girls whose images typically graced World War II bombers. Free-spin and other bonus events are set to boogie-woogie swing music to complete a nostalgic effect.

Rounding out the new brands being launched by WMS are “Austin Powers,” another Gamefield xD game (WMS is keeping the details on that one under wraps until the show) and “Gremlins,” a funny game based on the quirky 1984 horror/sci-fi film.

Of course, the new brands will be accompanied at the show by new versions of some of the legendary WMS brands. Standouts on the video side are a new Gamefield  xD version of “Willy Wonka and the Chocolate Factory” and a groundbreaking new community-play version of the video slot that started it all for WMS, “Reel ‘Em In.”

The new Willy Wonka game features a five-by-five reel interface with free spins and an “Oompa Loompa” bonus feature in which the diminutive characters do their song while expanding the reel set into the top screen of the Gamefield cabinet. The reels can grow up to more than 20 rows high, all the way to the top of the screen. There also is a reprise of the “Golden Ticket Bonus” from the original Willy Wonka game, which sends the player on a bonus journey around the film’s chocolate factory.

“Willy Wonka is one of the best slot brands out there,” Englman says. “It has absolutely the best hardware package in the business.”

“Reel ‘Em In Supercast” is the classic fishing game like you’ve never seen it before. The bank of games is linked in what WMS calls the “Community Immersion” package, with players at the bank participating in a common fishing game on the large LCD monitor.

The goal is still to go for the largest fish and therefore the largest bonus, but instead of picking a fisherman and rooting for him, the players each “become” a fisherman or fisher-woman, thanks to joystick devices that let players actually “cast” their reels to different areas of the video pond, and feel tugs on their line as they reel in a bonus fish. “It’s a new tool that allows players to interact with this game as they never have before,” says Englman.

Back to the Reels

“We’ve had a lot of success with the three-reel format over the past few years, and you’re going to see a lot of them at the show,” Englman says.

Perhaps the most prominent is another licensed brand the company recently picked up, a brand that once distinguished the slot-maker’s biggest rival: “Elvis.”

The first WMS slot to celebrate the King of Rock and Roll is a classic three-reel stepper in high denominations, featuring a mechanical wheel bonus in which you pick the Elvis Presley you want to be featured in the clips: “Memphis Elvis” from the 1950s Sun Records days; “Hollywood Elvis” from Presley’s string of 1960s movies; or “Vegas Elvis,” from the days the more mature, jump-suited Elvis did his legendary concerts at the International Hotel.

The other prominent new brand in the reel-spinning category is “Powerball,” based on the multi-state lottery game. As with Elvis, it is a three-reel, traditional high-denomination slot.

The mechanical reel-spinning format is also the home of the latest WMS game in the “Wizard of Oz” franchise, “Wizard of Oz: Road to Emerald City.” It is a three-reel mechanical slot with the “Transmissive Reels” transparent video overlay for animation during the bonus rounds. There are seven bonus events in all, one related to each main character in the legendary MGM film.

Finally, WMS reprises an old favorite in the reel-spinning genre, resurrecting the “High Speed” game, one of the most popular titles in the slot-maker’s original group of stepper slots in the mid-1990s. “High Speed Turbo” is a five-reel stepper in a nine-line, 40-credit configuration.

The game has all the modern bells and whistles, but maintains a retro look to appeal to players who were fans of the game on its first run. The bonus event is back, with free spins and guaranteed wins until the police car appears to end the bonus round.

The WMS lineup for Global Gaming Expo is rounded out by a remarkable collection of core for-sale video slots on the standard Blade and Blade s23 cabinets.

The cuteness factor rears its head again with two follow-ups to last year’s “OMG! Kittens”—“OMG! Puppies” and “OMG! Kittens Safari.” With slots already out there honoring Frank Sinatra and Dean Martin, WMS finally pays tribute to the other main Rat Pack member with the “Sammy Davis Jr.” game. This one has a wild reel feature featuring Sammy dancing as the reel moves across the game screen.

The “Cascading Reels” series gets new entries with “Cool Jewels” and “Sweet Drops.” “Ruby Star” is a six-reel game, with two reels randomly wild on each spin. A new “Life of Luxury”-style game, called “The Best Things In Life,” features a six-level progressive, with each jackpot won by a certain level of scattered diamond symbols on the reels.

“When you look at a lineup for G2E, what do you want? You want hardware, you want brands and lots of innovative new mechanics,” says Englman. “I think we’ve covered all of that. In terms of product, we are firing on all cylinders.