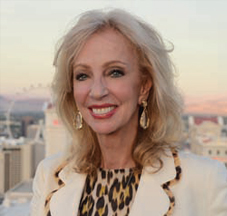 In her new role, she will expand the

institute’s executive development program, a highly regarded training ground for future industry professionals. It’s part of an initiative aimed at promoting diversity and inclusiveness within the executive ranks of gaming and hospitality.

Blackhurst resigned as Caesars’ executive vice president of government relations and corporate social responsibility at the end of last summer, ending a 20-year career with the Las Vegas-based casino giant in which she was highly regarded as a champion of social responsibility.