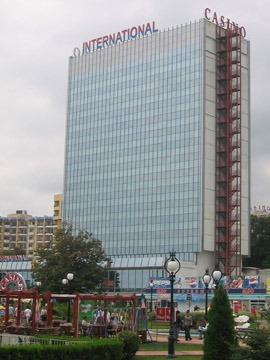 Bulgaria has developed a vibrant gaming industry over the past 20 years, as have many of the formerly Soviet-dominated lands. But while individual casinos and the gaming devices themselves are now a match for those found just about anywhere in Europe, the nation has some ground to cover before government and the general population can realize the full, positive potential of gaming.

Bulgarian Betting
At the recent Fifth World Meeting of Bulgarian Media, where the role of the media in improving the nation’s tourism offering was a featured topic, a presentation from the Bulgarian Union of Balneology and Spa Tourism put forward the group’s idea to establish an internationally recognized wellness industry within the country.

The natural complement to such an industry is casino gaming, and the suggestion that gaming could help Bulgaria become a year-round tourism destination was presented at the conference by Nadia Hristova, member of the management board of the Bulgarian Trade Association of Manufacturers and Operators in the Gaming Industry—BTAMOGI for semi-short.

The idea—to promote casino gaming officially as part of the total tourism package—has been kicking around Bulgarian government circles for some time. In January 2008 the State Gaming Commission organized a conference to examine all aspects of the industry. During a discussion of the latest strategy on tourism development, Deputy Finance Minister Atanas Kunchev said, “Gambling tourism is a resource Bulgaria has not exploited. A national gambling development program needs to be drawn up as part of the tourism industry.”

The following month, State Agency of Tourism Director Anelia Krushkova revealed that Bulgaria had been designated an official tourism destination by the government of China.

Given the astounding success of casinos in Macau at the time, fueled in part by Chinese visiting from the mainland, it was only natural to start thinking of linking casinos to tourism.

In particular, the challenge presented by the prospect of Chinese visitors was to find something other than Bulgaria’s main tourism focus—Western religious historical points of interest—that would appeal to the new audience. However, Krushkova stressed the point that, at the time, there was no way to incorporate gaming into the tourism strategy discussions then under way.

In reality, though, Bulgaria’s casinos have been attracting tourists from nearby countries for years. However, not a lot of centralized thought or effort has gone into the process.

Turkish Connection
For residents of neighboring Turkey especially, where casinos have been banned since the late 1990s, Bulgaria has become a gaming destination. The Princess hotel group from Turkish entrepreneur Sudi Ozkan has invested over $100 million in hotels and casinos all over Bulgaria. Ozkan has said he prefers to invest in sites closer to Turkey, like his Dedeman Trimontium Princess Hotel and Casino in Plovdiv, which is only 330 kilometers from Istanbul. But he also has the 600-room Dedeman Princess Hotel and Casino in Sofia, another 230 kilometers past Plovdiv.

A new and potentially huge factor that could affect casino tourism is the long-expected shutdown of gaming in Russia and the recent surprise closing of all casinos and slot parlors in Ukraine. Especially the Black Sea resort areas of Bulgaria and Romania could be in for a particularly busy summer season.

Curiously, the main websites of some hotel resorts barely, if at all, mention there is a casino on the premises, let alone provide a description of what games or amenities are available. To acquire that information, the tourist will have to locate a casino’s dedicated website.

For example, a potential tourist hears that there is a casino at the Dedeman Princess Sofia Hotel. If he goes to the Dedeman Hotel home page, and from there to the Princess Sofia description, there is no mention at all of a casino. The only way to discover the presence of a casino is to somehow arrive at www.worldofprincess.com and from there navigate to the individual hotel or casino. Even then, the link “Dedeman Princess Sofia Hotel” leads to a site that only lists “casino” as one of the hotel amenities. Only the link “Sofia Princess Casino” leads to details about the property, such as the availability of 220 slot machines and 16 live game tables.

In all, Bulgaria has 24 casinos with tables and slots, plus about 950 casinos with slots only. The machines in both types of casinos operate under the same legislation. Operators are allowed to set their own minimum and maximum stakes, as long as approval is received from the gaming commission. The law does require that machines pay out at a rate of at least 80 percent, and allows up to 5 percent of wagers to build jackpots.

The international poker world has found its way to Bulgaria in recent years. Several casinos offer cash games and tournaments in Texas hold’em. Even the electronic poker tables of supplier PokerTek are represented in clubs around the country, including the three Techno Poker Clubs of the Eldorado group, in Sophia and Varna.

A major European poker event, the Bulgarian leg of the European Masters of Poker tournament series, was held at the Grand Hotel & Casino International, situated in the Golden Sands beach resort on the Black Sea coast. The tournament brought 311 players from 18 different countries to Golden Sands, with the final table attended by players from Bulgaria, Finland, Israel, Poland and Sweden. A €311,000 prize pool provided the winner with €77,750.

Gaming is not just for visitors, however. Especially the slot casinos cater for the local traffic. In 2008 there were 17,000 machines in slot clubs, as compared to about 1,600 in the full casinos. Some 80,000 people nationwide are employed in one form of gaming or another, including bingo parlors, betting shops and such.

On the darker side, according to ReportingProject, a 2008 State Gaming Commission survey found that between 4 percent and 7 percent of adults, and as many as 12 percent of high school students, have a gambling problem.

Last October, the three coalition parties that govern Bulgaria agreed to regulatory amendments that could eventually lead to a regulated online gaming industry. However, the primary aim of the amendment is to benefit the state lottery by expanding its distribution network.

Bulgaria has been fortunate to have a strong, involved gaming trade organization since the early days of regulated gaming. BTAMOGI has been in existence since 1992, and is the main group representing operators and producers of gaming equipment. Membership includes the operators of the 40 largest gaming halls in the country and 70 percent of Bulgarian manufacturers of gaming equipment.

Since its inception, BTAMOGI has been closely involved in the process of developing legislation and regulations for the industry. Many proposals that have become law originated with the association.

Besides its efforts to encourage the link between tourism and gaming, the association in general wants to raise the profile and prestige of the gaming industry and protect the interests of its members and the public. The organization is working toward implementation of unified standards in the local gaming industry and harmonizing those standards with international standards, including the legal framework in Bulgaria and abroad.

BTAMOGI also is working to regulate public relations related to the gaming industry, and to provide support to problem gambling campaigns, including organizing and sponsoring educational and medical programs, special courses and other such initiatives.

Since 2005, the association has staged a national, bi-annual seminar where the latest gaming industry developments in technology, management and legislation are introduced and discussed.

In autumn 2008, BTAMOGI launched the first Balkan Entertainment & Gaming Expo in Sofia. Together with the accompanying Eastern European Gaming Summit, BEGE was intended as a meeting point for those already operating in the greater Balkans as well as those looking to become involved at whatever level in the region’s gaming, entertainment and tourism sectors.

The expo drew 2,100 visitors to the trade show floor, where they found 78 exhibitors. Seventy percent of visitors were from Bulgaria and the rest came from 39 different countries. The gaming summit was attended by 160 people, the largest representations being from Bulgaria, Serbia, Romania and Italy.

This year BEGE and EEGS are scheduled to run again in Sofia, October 5-7. What effect the worldwide economic downturn ultimately will have on attendance remains to be seen, but so far, exhibitor participation appears to be lagging well behind that of last year.

Not to worry. The people of the Balkans are adaptable.