Can millennials ever cozy up to the casino’s most “beatable” game? 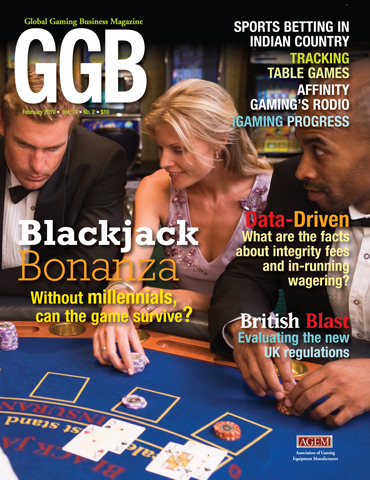 Combining simple rules, advanced strategy and its “beatable” reputation, it’s no secret that blackjack has been a casino favorite for decades.

Though the game continues to dominate the casino and certainly has a future on the floor, some of the biggest names in gaming believe it will take more than a few new side bets to intrigue the next generation of gamers; elements of the casino floor need to be completely revamped to create a more social and welcoming space for new players.

According to these sources, often, millennials aren’t playing table games like blackjack because they may feel uncomfortable and unwelcome upon entry onto the casino floor. The intricate “yellow brick road” that winds its way through a labyrinth of machines and tables, lined with unfamiliar games and faces, is intimidating to new players. They don’t even have the chance to make it to the tables.

And these feelings of inadequacy are only amplified when young players are seated next to older and more experienced players who aren’t always interested in mentoring the next generation. Mix a fussy dealer and belligerent customers in with a poor understanding of the game rules, and a new player’s first hand of blackjack might turn into their last.

Fortunately, however, casino experts are working hard to understand their newest players. These experts believe that innovation, collaboration and socialization are the tricks necessary to bring new players to the floor—and keep them there.

The Future of Blackjack

For years, some of the biggest questions about the future of gaming have revolved around the generation born between 1981 and 1996. What do millennials want, and how do casinos make a profit from them? Blackjack’s easy-to-learn rules combined with its advanced strategy and opportunities for socialization should make it the perfect game for millennials. But is this really the case?

According to Anthony Curtis, publisher of the Las Vegas Advisor, “The millennial puzzle is a tough one. You’d expect that millennials would love a game like blackjack, but from what I’ve observed they tend to gravitate more towards roulette.”

Dan Sahl agrees. Sahl, associate director of the International Gaming Institute’s Center for Gaming Innovation at the University of Nevada, Las Vegas, uses his background in sociology to provide a theory that may explain why casinos, even those that offer skill-based games, still have trouble recruiting millennials to the casino floor.

“Looking towards the future, the question isn’t just about innovating the games themselves,” Sahl says. “Instead, we should be asking ourselves if the way we are introducing the social side of table games like blackjack is appealing to millennials.”

This generation is used to living in an era where all the information they could ever need is at their fingertips. The unspoken rules and expectations in a game like blackjack, however, aren’t something that a quick Google search can solve. For young players, a fear of messing up hangs in the air. This feeling is only amplified when surrounded by dealers and seasoned players who are never hesitant to criticize when mistakes are made.

“How is a new player supposed to learn when they’re afraid to ask any questions?” Sahl says.

The elements of uncertainty in a live game of blackjack need to be experienced to be understood, but the elements that make the game exciting also create a barrier of entry to the most novice players. And though bar-top and electronic blackjack games provide an opportunity to privately learn some of the rules and strategy, these games don’t give players the chance to learn the more intimidating, but also exhilarating, unwritten social rules.

Though blackjack can offer the skill-based and social elements that younger players want—including memorable interactions with friends, players and dealers—we have to first encourage millennials to view blackjack as their game.

A game like roulette, though it offers no real skill, provides socialization with simplicity and without uncertainty. And although the social space of the casino needs to be improved upon, we can’t forget that the existing game of blackjack also has room for innovation.

As the industry adjusts the blackjack experience to be more friendly and inviting, innovative additions to the blackjack table, like side bets, progressives and electronic apparatus, should be what keeps both new and experienced players coming back for more.

“When compared with other table games, blackjack has seen the most changes over the years, and often these changes cater to recreational players,” says Roger Snow, vice president of table games for Scientific Games. “Not too long ago, serious players would hunt down the best blackjack game in terms of rules and number of decks. But now players are there to have fun, and these changes are designed to cater to that audience.”

For operators and manufacturers, satisfying both old and new customers becomes a difficult balancing act. For hardcore players, the base game of blackjack may become repetitive after a while, and side bets like 21+3, Lucky Ladies and Buster Blackjack, along with progressives like Blazing 7s and Super 4, introduce more ways to win and keep things interesting.

But different side bets appeal to different players, according to Snow.

“Experienced players know that these types of bets favor the house, so side bets need enough volatility to entice them to play.”

Sahl agrees, noting, “Good side bets will always be important for casinos as a source of increased revenue, and players like them because they provide variation and volatility to the traditional game. With some side bets paying 100-to-1, 300-to-1 or even 500-to-1, most players will always be enticed by the potential to turn $1 into $100.”

However, according to Max Rubin—casino consultant, author of Comp City: A Guide to Free Casino Vacations, and host of the world-famous Blackjack Ball—a key component of side bets should be hit frequency, not necessarily volatility. Rubin is personally a fan of Buster Blackjack because of its simplicity and hit frequency. Players win if the dealer busts, which, in a good game of blackjack, should happen often. And, as a bonus, in certain cases payouts on Buster Blackjack can be huge—as much as 250-to-1.

Sahl also believes that electronic blackjack games create additional room for innovation, and that these versions are on the rise for several reasons. These games allow novice players to brush up on their skills with relatively low stakes—as low as 25 cents per hand, versus the typical $5 per hand minimum at a table—as well as removing much of the intimidation factor that accompanies first-timers in live table games.

Blackjack’s popular game play, social experiences and reputation as a “beatable” game ensure that it comprises roughly 50 percent of tables on the floor. In recent years, however, casinos have used various methods to mitigate the risks of advantage play. Side bets, for example, often have a greater house advantage than the base game.

“If you see a side bet on a game of blackjack, your best bet is usually to not use it,” suggests Curtis.

And side bets aren’t the only way casinos make additional profit from players. For those who understand the math behind games like blackjack, a 6:5 payoff versus a traditional 3:2 payoff is outrageous. But most recreational players don’t know the difference.

Moreover, nuances in the house rules are yet another way casinos may create an edge for themselves.

“Can you resplit aces? Can you double down after splitting? Does the dealer hit or stand on soft 17? One answer is better than the other in all cases,” says Curtis, “but the recreational blackjack player has no idea.”

Couple these house rules with advancements in casino technologies—like automatic card shufflers that deal anywhere from six to eight decks of cards—and games are sped up, and casinos believe they’ve solved the advantage play problem.

To some, it may seem like casinos should take advantage of their most unassuming players. But, as is often the case, just because you can doesn’t mean you should.

Curtis says, “Once word gets out that one casino has better odds than another, players will patronize that casino even if they don’t understand the math behind why.”

Word-of-mouth goes a long way in the gaming industry, and it’s a way of holding casinos accountable for treating their players fairly. Until there is a universal industry standard, the incentive for casinos to offer better odds than their competitors is the potential for increased popularity.

The Social Side of Gaming

And while casino operators and game manufacturers are often primarily data-driven, Rubin believes that the industry should be driven by the social side of gaming, not the numbers. Casinos should provide patrons with opportunities to interact positively with friends, fellow players and dealers. Players shouldn’t be greeted by isolation and unsmiling faces when seated at a table game, as is often the case. Rubin believes that casinos need to reimagine what fun looks like for younger players and simultaneously breathe life into a classic casino game—making game play more enjoyable for players of all ages.

For now, however, countermeasures introduced to prevent advantage play in blackjack contribute to the feelings of unease and intimidation that newcomers experience. Rubin believes that these data-driven strategies ultimately hurt casinos.

“All players should not be punished for the acts of a select few,” he says. “Most players are not card counters, but we treat them like they are.”

Instead of creating strict rules and regulations, Rubin believes that a casino’s profitability and success depend on the happiness of the people, which depends as much on the friendliness of the encounter as the outcome of the cards.

“Most dealers are part-time and haven’t been trained very well. They don’t know how to spot card counters or interact with players,” says Rubin.

In the long run, a cost-saving strategy can lead to low morale because, generally speaking, when dealers have fun, players have fun. Without the proper training, dealers are simply taught how to deal quickly and efficiently, often using automatic card shufflers to further expedite the dealing process. Though speeding up the game should generate more revenue from an increased number of hands, speeding up a game may also make players lose faster and leave faster.

“Casinos are a people business, and data can’t be used to measure everything because it doesn’t account for the human side of things,” says Rubin.

With social elements and innovative side bets, blackjack has the potential to draw new players to the casino floor, as well as retain old ones. Starting with the people, from attentive cocktail servers to properly trained dealers, we want players to walk away feeling like winners—even after losing their last chip. Frequent-hitting side bets, tables that pay 3:2, and advantageous house rules should be what keeps these players coming back time and time again. Though the data might show that this isn’t the fastest way to make a profit, it’s the only way to ensure a happy, passionate base of loyal blackjack players.

Sources say that for now and for the foreseeable future, the biggest barrier casinos need to overcome is getting millennials to sit down at their tables. The games themselves aren’t the issue.

“The key to success in a game like blackjack,” says Sahl, “is creating a more comfortable culture for younger players. Casinos should be asking themselves how they can innovate the way table gaming is offered as a fun social experience.”