Navajo Nation making up for lost time in gaming industry 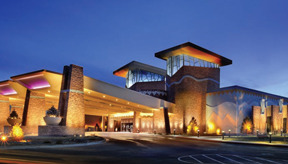 “Nothing beats personal visits to the properties,” says Watchman, CEO of Navajo Nation Gaming Enterprises (NNGE), which operates four government casinos on the sprawling, remote reservation. “I put a lot of miles on that car.”

It took three referendums to get approval for gambling from Navajo citizens concerned about introducing casinos to a community plagued by addiction, depression, domestic abuse and other characteristics of high unemployment and poverty.

But a gambling measure finally received voter acceptance in 2004, and the nation has since been making up for lost time.

Fire Rock, Flowing Waters Casino near Shiprock, Northern Edge Casino in Farmington and the flagship Twin Arrows Casino Resort on Interstate 40 west of Flagstaff generated about $120 million in combined revenues in 2015, according to reliable sources. (Tribal government enterprise figures are not publicly disclosed.)

The operations also created 1,500 jobs for an Indian nation that has long suffered from poverty and high unemployment. Navajo and the Cherokee Nation each have nearly 300,000 members, but the Navajo have the country’s largest reservation with 27,500 square miles in Arizona, New Mexico and Utah.

Eighty-five percent of the casino industry jobs are held by Navajo citizens, paying out some $122.5 million a year in salaries and benefits.

“It’s good for our Navajo people to get a paycheck, go shopping and buy cars. It gives them a tremendous sense of pride that they can raise their families,” Navajo President Russell Begaye told a fall tribal leadership conference in Scottsdale, Arizona.

Unlike many of the 247 U.S. tribes operating casinos, the Navajo Nation has a government and economic infrastructure uniquely equipped to satisfy the congressional intent of IGRA, which was to use gambling as a means of strengthening tribal governance and creating diversified economies.

Navajo plans to incorporate its casinos into the business plans for many of these enterprises.

Rather than seeking traditional bank financing to build its casinos, Navajo chose to finance its casinos, and is currently collecting interest on about $200 million in debt.

Meanwhile, the tribe, in extending utilities to Twin Arrows and the remote Northern Edge and Flowing Waters casinos, is providing infrastructure for other potential development.

“Any time a tribal enterprise can be self-sufficient, that’s a positive,” says Quincy Natay, a member of the NNGE board of directors.

“The tribe is earning interest from the loan. It is also gaining additional revenue through job creation and taxation. All those mechanisms are designed to help a government. And we’re complementing all that with related development.”

The Twin Arrows resort on I-40—halfway between Flagstaff and Winslow, Arizona—is serving as the economic hub for a proposed retail, entertainment and housing development that is expected to include participation by the tribe’s shopping center, housing and oil and gas enterprises.

The proposed Outlook at Glittering Mountain is envisioned as a 70-acre residential, retail and business and entertainment development, which will likely include a sizeable truck stop and travel center.

The development will include 370 housing units, most intended to provide housing for Twin Arrows employees.

“In essence, we’re looking at a master-planned community,” Watchman says.

“It was difficult coming into gambling late,” Natay says. “In my opinion, the sooner you can jump onto a positive bandwagon, the better. You see more of the rewards.

“But being Navajo and where we’re located, gaming does provide opportunities for us.”

Most of the Glittering Mountain land will not be placed into trust, so the tribe will pay state and local property and business taxes.

“It will be good for Coconino County and the Navajo Nation,” Nathan Begay, CEO of Navajo Shopping Centers, Inc., told the Navajo Times.

Navajo cattle ranches are supplying 25 percent of the beef for the Twin Arrows restaurants. And retail shops are stocked with jewelry, pottery and blankets produced by Navajo artisans.

“Obviously, we’re a gaming business enterprise,” Watchman says of Navajo Nation Gaming. “But I’m trying to focus on job creation and revenue creation,” building a sustainable economy for the massive reservation that to a large degree depends on its coal development.

“I think we have some opportunity for gaming growth on Navajo. But we’re using the gaming as the engine to expand into other related business ventures,” Watchman says.

The Navajo Nation is a major tourist attraction, much of it European visitors seeking insight into indigenous America. The tribe is hoping its gambling industry can tap into the tourism/hospitality sector and trigger additional growth.

Crafting a cooperative partnership between the tribal hospitality and gambling business enterprises that could involve pooling revenues may be a bit tricky, particularly since the gambling sector also includes hotel operations.

“But there’s got to be cooperation” between the enterprises, Natay says. “We’re creating opportunities for them as well as us.”

“The return generated by our gaming assets will help grow the hospitality assets,” Watchman says.

“What if we try to partner and work with them (hospitality enterprise) so we have a nice hotel product on the reservation? We can share customers. Maybe it would be one entity. There’s a lot of opportunity in growth on that side.”

Limited-service motels might also complement the casinos in Gallup and Farmington. And the tribe is considering Class II bingo-style casinos and hotel rooms at Page and Chinle, Arizona—the entrance to Canyon de Chelly, where an estimated 1.2 million tourists visit every year.

“People come to Navajo but we don’t have enough hotel product on the reservation,” Watchman says. “It would be ideal if we can marry hotel rooms with gaming, food and beverage and conference room space.

“There is room for a sizable hotel product both at Gallup and Farmington,” Watchman says. “I could easily double the hotel inventory.”

A Diversity Of Gambling

Navajo offers a diversity of gambling, beginning with its flagship Twin Arrows, a fully integrated resort with 200 hotel rooms, meeting space, restaurants and a casino with 1,100 slot machines and table games.

Navajo in its tribal-state compact with New Mexico will be allowed in 2021 to open a fourth Class III, casino-style facility on reservation land in the Albuquerque area. Market saturation would make moving into the region sooner a major financial risk.

“The compact prohibition gives us an opportunity to determine whether there’s opportunity to grow,” Watchman says of a proposed casino site at To-Hajilee, a reservation chapter on Interstate 40 west of Albuquerque.

It is questionable whether there is any current demand for increasing the gambling product on Navajo. The tribe hopes to double the job inventory over the next five years, but it may come through the development of hotel rooms, limited-service motels and other non-gambling amenities.

“The question for us is how much more we can grow our gaming product. That’s the crux of it,” Watchman says. “There is opportunity for some gambling growth. But there are additional opportunities in hospitality and expanding our amenities.”

Twin Arrows has only recently begun operating in the black. And while directors of the gambling enterprise are pleased with revenue flow and job creation, there is a growing desire to retire the approximately $200 million debt.

“We’re starting to grow into our shoes,” Natay says of Twin Arrows. “It’s started to turn around. We had to make changes and adjustments just like any startup business.

“There may be an opportunity at Page and other small communities which are tourist attractions such as Monument Valley. At some point, we would look into growing into those areas.”

Navajo leaders faced some difficult issues in bringing gambling to a community struggling with poverty-related issues such as depression and drug and alcohol addiction, violence and domestic abuse, diabetes and chronic dietary problems.

Many tribal casinos nationwide cater to a largely non-Indian customer base. Navajo casinos are largely marketed to Navajo citizens and those from other nearby indigenous communities, such as the Hopi Tribe of Arizona.

As a government enterprise, the Navajo Nation Council in legalizing reservation casinos has been forced to look at problem and compulsive gambling and related issues from a communitywide, public health perspective.

Alcohol is illegal on the reservation. But the council exempted casinos from the prohibition, aware that liquor was necessary to operating a successful casino.

“Opening up gaming without alcohol, it wouldn’t work,” Watchman says. “We’re the only enterprise on Navajo allowed to sell alcohol.”

The council in August imposed a 3.25 percent tax on alcoholic beverages, a proposal expected to raise $73,000 a year. The revenues will be placed in a fund to help combat drunken driving on the reservation.

The council also excluded casinos from a ban on smoking, again bowing to gambling customer profiles. Smoking is restricted to designated areas with slot machines and table games.

The level of responsibility for problem and responsible gambling is higher for tribal casinos that cater to indigenous gamblers versus those in urban areas marketed to non-Indians.

Watchman and Natay both believe the nation must adopt a public health approach to the issue, taking into account the impact gambling could have on community problems such as depression and suicide, domestic abuse and addiction.

“There are pros and cons to providing gaming to an indigenous population, and in what that brings to a community,” Natay says.

It’s worth noting, he says, that revenue fell off at nearby casinos before the opening of Fire Rock in 2008, indicating Navajo citizens were already patronizing other gambling halls.

“Is it an issue? Without question,” Watchman says of gambling’s potentially negative impact on the community. “To what extent is it an issue, we don’t know yet.

The organizational structure is broken down into offices of administration, licensing, audit, slot compliance, enforcement and surveillance.

There are 113 positions, though Thomas is hoping to up the personnel level to 120.

Thomas says she believes Navajo minimum internal operating controls (MICS) are as efficient if not superior to those at most New Mexico and Arizona casinos. Internal audits have shown compliance with the regulations.

“From what I’ve seen at other tribal casinos, we cover all the bases,” Thomas says. “We do a good job.”

There have been no disclosures of major cheating or embezzlement at Navajo casinos.

With less than a decade under its belt, the agency is still in its formative stages. MICS are in a constant state of revision and regulations and procedures are continually being refined.

“Managers are constantly analyzing the processes that are going on in the casino and identifying areas in the internal controls that might be improved upon,” Thomas says. “There’s always room for improvement. We are always looking for ways to ensure internal controls are working and the assets of the Navajo Nation are secure.”

Regulators, the gambling enterprise and casino operators must work closely to ensure protection of casino assets, Thomas says. As a regulator, she believes it is often best to ensure compliance rather than take enforcement action against casinos and individual workers and supervisors.

“When I look at our processes, I’m always looking for areas that can be improved upon,” Thomas says. “I like to make sure our policies, procedures and regulations are friendly, but not too friendly.

The regulatory agency is unique, however, in that it must work under two tribal state compacts: New Mexico and Arizona.

“That’s been a challenge,” Thomas says.