Macau is down for the count, so what countries are leading the pandemic recovery? 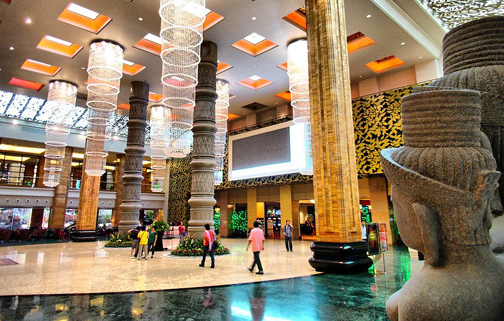 Gaming markets in Asia were among the first to be impacted by the Covid-19 pandemic, and continue to be impacted today. Whether these impacts stem from pandemic-related restrictions or the so-called Chinese “blacklist” for certain overnight tourist destinations, gaming markets across Asia and Oceania on the Pacific Rim are still in a stage of recovery.

Prior to Covid-19, nearly all gaming markets in Asia relied heavily on gamblers visiting from China. Most operators had begun to pursue strategies to diversify their business and minimize risks by focusing beyond VIP (junket) gamers to a broader base of customers including premium mass and non-gaming patrons.

This was the case in Macau (which remains the only land-based gaming destination within the purview of the People’s Republic of China, or PRC) as well as in jurisdictions like Singapore, the Philippines, Cambodia and Vietnam. However, once the pandemic began in China, the effects on gaming markets throughout Asia became exacerbated as the PRC restricted the flow of its residents across its borders.

Despite many jurisdictions now beginning to reopen their borders to foreign visitors, a critical question remains as to whether the PRC’s blacklist will further prevent Chinese players from returning to these destinations at the same levels experienced prior to the pandemic. The blacklist targets both land-based gaming and iGaming operations that cater to Chinese residents, and its enforcement may pose the greatest long-term threat to casino operators throughout the Asia-Pacific region.

Junkets have also been highly scrutinized under the policy, as it targets those who organize trips for players to gamble overseas. The PRC can exert its influence through the threat of the blacklist to outside jurisdictions, which can further impact hospitality and other tourism-driven sectors that rely on Chinese customers.

At the onset of Covid, many would have suspected that global gaming market recovery would eventually occur in tandem with recovery from the pandemic. However, the return of Asia’s largest demand segment remains questionable and has helped stall the recovery of several gaming markets. 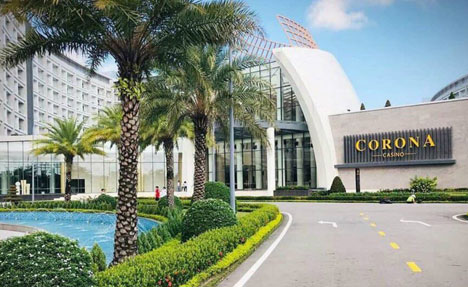 Prior to the pandemic, well over 1 million tourists would visit Vietnam in a given month, with a majority of visitors coming from China and elsewhere within Asia. In 2021, this figure dropped to roughly 13,000, and, in the first quarter of 2022, only about 30,000 people visited Vietnam per month. There has been a push to revitalize the tourism sector in the country amid a protracted recovery in international travel, and there is ample opportunity to tap into the nearly 100 million people who reside within Vietnam today.

Prior to 2019, Vietnamese citizens were not permitted to gamble at casinos located in Vietnam. However, under a pilot program first announced in 2017, the Corona Resort & Casino in Phu Quoc became the first casino in Vietnam to allow locals onto the gaming floor. Another locals-designated casino has been authorized for the Quang Ninh province but has yet to open.

Recent reports also indicate that the Vietnamese Ministry of Finance is interested in expanding the pilot program to allow two more casinos, with one in the Khanh Hoa province and one in Da Nang City. By tapping into the value of the local market and focusing on other international source markets such as South Korea (which contributed 4.3 million visits to Vietnam in 2019), the gaming market in Vietnam could recover more quickly than other markets around the greater region. 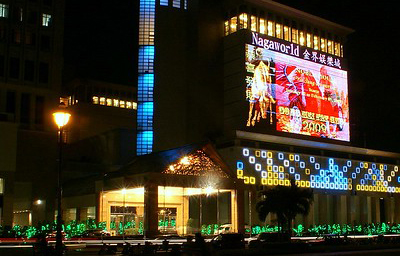 Following a Covid outbreak in March 2021, Cambodia entered into lockdown at the behest of the World Health Organization. NagaWorld, the leading integrated resort in Cambodia, elected to suspend operations for nearly six months in 2021.

After sustaining double-digit annual increases over several years prior to the pandemic, total revenue for NagaCorp fell by almost 50 percent to $878.7 million in 2020, and again by nearly 75 percent to $225.9 million in 2021.

After reopening in September 2021, NagaWorld is well positioned to recover in 2022, but outlooks from industry analysts are less rosy than pre-pandemic estimates. In a February 2022 report from Moody’s, analysts noted that NagaCorp is “constrained by its single-site operations as well as exposure to political risk and the evolving regulatory framework” within Cambodia. Meanwhile, late in 2021, Morgan Stanley listed Naga as one of the most exposed to risks stemming from a decline in the VIP segment, suggesting that the market faces threats from actors abroad as well as internally.

Although Cambodia has reopened its borders to foreign visitors as of November 2021, the market is far from returning to pre-pandemic performance levels. In the coastal destination of Sihanoukville, the pandemic brought further chaos to an emerging market already burdened by overcrowding, poor working conditions, mistreatment of local residents, and a total lack of regulatory enforcement.

When online gaming was outlawed in Cambodia late in 2019, the town saw a mass exodus of foreign workers and tourists alike, and those who remained were left helpless. As the first wave of Covid-19 came shortly thereafter, the number of casinos operating in Sihanoukville was cut in half. With workers and visitors fleeing en masse, combined with regulatory uncertainty at home and abroad, many challenges remain in the face of a recovery for the gaming industry in Cambodia. 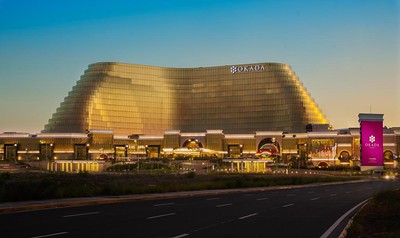 A nearly two-year ban on tourism into the Philippines was lifted in February 2022, following one of the longest and strictest lockdowns enforced since the initial outbreak of Covid. The reopening was initially slated for December 2021 but was delayed due to the spread of the omicron variant. With such tight restrictions enforced on both residents and tourists, gaming revenue in the Philippines was severely impacted across all segments.

The Philippines did experience a slight recovery in 2021 after the initial pandemic restrictions were eased. Entertainment City, the district in Manila that is home to the country’s largest integrated resorts, reached approximately $1.7 billion in GGR in 2021, representing an increase of 18.4 percent over the prior year. However, this remains well below the $3.4 billion GGR achieved in 2019 prior to the pandemic.

Filipino residents have also been a significant source of revenue to the Philippine Amusement and Gaming Corporation, particularly through its slot parlors and other smaller casinos. However, Entertainment City remains the single largest revenue source to PAGCOR and relies heavily on gaming and entertainment customers visiting from China. 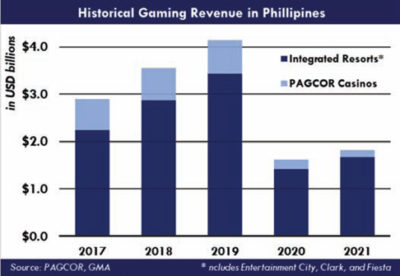 While the IR operators in the Philippines may fret over the return of visitors from China, other questions remain regarding the Philippine offshore gaming operators (POGOs) that were already facing scrutiny from Beijing and were stunted by the pandemic. POGOs were widely understood to be targeting players based in China, and the vast majority of employees were Chinese nationals residing in the Philippines. Following the outbreak of the virus, tens if not hundreds of thousands of Chinese workers fled the country, and many POGOs have closed in the meantime. Now, with the looming threat of the blacklist, a resurgence of these operations in the Philippines remains in question with workers unable to return, and gamers not inclined to log in and play due to increased oversight.

Newly elected President Fernando Marcos Jr. is the son of the late dictator Fernando Marcos Sr., who was instrumental in the formation of PAGCOR in 1976. “Bong Bong,” as junior is known, is expected to tackle such tough issues as gaming expansion, whether POGOs will be returning and the elimination of cock fighting. At his side is Vice President Sara Duterte, the daughter of recently departed and anti-gaming President Roberto Duterte, so it is at this time unclear how Philippine gaming will be treated. 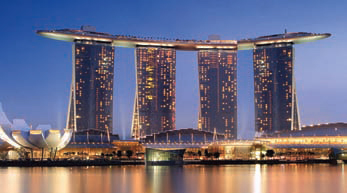 Despite a robust local market segment, the gaming market in Singapore has been dramatically impacted by pandemic-related restrictions and the Chinese crackdown on gaming. Singapore’s borders closed in March 2020 and did not fully reopen until April 2022, which still requires all travelers to provide a negative coronavirus test. At the same time, the Minster of Health changed the country’s Covid-19 status to “Code Yellow” from “Code Orange,” which required reduced indoor capacity, temperature checks, etc.

While masks are still required in most indoor places, these eased restrictions are expected to positively impact the casinos in the region. Even still, Singapore’s tourism market, which is a large source of revenue for its casinos, was substantially impacted by the pandemic. Due to restrictions and changes in tourism behavior, Singapore’s international visitor arrivals fell by a staggering 98.5 percent from nearly 22 million in 2019 to approximately 330,000 in 2021.

From 2019 to 2021, revenues produced by Singapore’s two integrated resorts, Marina Bay Sands and Resorts World Sentosa, decreased drastically. During that period, Marina Bay Sands gaming revenue fell from nearly US$2.17 billion to under US$1 billion ($905 million), representing only 58 percent of 2019 gaming revenue. Resorts World Sentosa’s overall revenue, including gaming and non-gaming departments, fell by a very similar margin from $2.48 billion to $1.06 billion, or nearly 57 percent.

Most analysts agree that it will take some time for the market to recover as a large portion of revenue stemmed from Chinese demand and other tourist segments that are just now able to more freely visit Singapore again. In its first-quarter 2022 results, Las Vegas Sands detailed that Marina Bay Sands was still being impacted by pandemic-related restrictions and reduced visitation.

Despite this fact, the property was able to generate positive adjusted property EBITDA, reaching US$121 million in that quarter. Despite quarterly EBITDA being down 71.4 percent (from US$423 million) in comparison to 2019, property EBITDA had grown month to month from January to March.

Las Vegas Sands Chairman and CEO Rob Goldstein expressed that he expects that property EBITDA could overcome the US$1 billion mark in 2022. This goal shows that operators are optimistic about the near term, but still realistic given the fact that this would still represent a 40 percent decline from pre-pandemic EBITDA levels of close to US$1.7 billion (achieved in 2019). 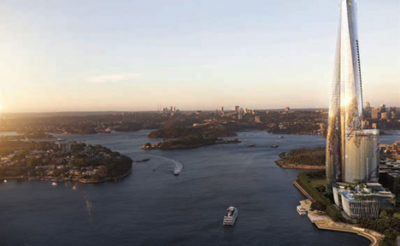 It is yet to be determined how these operators will be able to replace these previously significant sources of gaming revenue (although it should be noted that these revenue segments are not as profitable as other segments). In 2019, Crown Resorts garnered AU$513.4 million from its VIP segment, but in 2021 this segment’s revenue fell to only AU$1 million. Similarly, Star Entertainment generated AU$586.0 million in 2019, but this segment only contributed AU$9.5 million in 2021.

At the same time, the Australian gaming market has also been impacted by pandemic-related restrictions, with most of the international impact felt in the previously mentioned revenue segments. On March 23, 2020, casinos across the country were forced to close and, in general, were subject to some of the strictest lockdown procedures of any gaming market in the greater region. 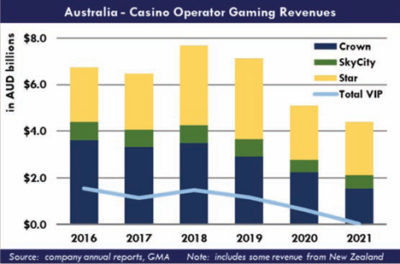 From a tourism perspective, Australia’s international arrivals fell from 9.5 million in 2019 to less than 250,000 in 2021 (a 97.4 percent decrease). However, now, all vaccinated individuals with an eligible visa may travel to Australia again.

Since reopening, the Australian gaming market has seen a return to pre-pandemic domestic gambling loss levels. In a March 2022 bulletin, the Reserve Bank of Australia noted that “unlike some other categories of consumption, gaming machine gambling losses typically rebounded completely once lockdowns ended.”

Although the international segment will begin to return in the near term, it will return without most of the junket/VIP segment. As such, many of Australia’s casinos will be working to establish a new normal for baseline gaming revenue levels in their respective markets.

This may also occur alongside a regulatory overhaul for the gaming industry in Australia that will focus on casinos as well as pokies (slot machines located in smaller venues outside of casinos). The viability of the market, especially in terms of international play, will likely depend more heavily on internal controls as Australia looks toward establishing a more responsible gaming environment.

From a pandemic perspective, most of these analyzed markets are beginning to recover with tourism returning to their countries in some capacity and many pandemic-related restrictions recently lifted. However, the broad impact of the Chinese blacklist and stricter enforcement of regulatory measures in markets like Australia will lengthen the greater region’s road to recovery.