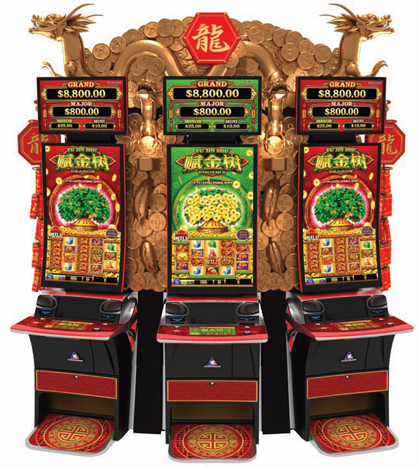 Aruze Gaming America has been known for stretching the boundaries of what a slot machine can do. From the grand presentation of games like Paradise Fishing and Mad Mountain on the Muso Limited community-style setup to new ways to present popular game mechanics, to what arguably is the most unique electronic table game in the business, Aruze has been known for pushing the envelope.

Over the past two years, the Las Vegas-based supplier has launched a collection of state-of-the-art hardware in the Muso series, each variation introduced with games designed for the format. Meanwhile, it has continued to perfect Roll to Win Craps, the ETG that mimics a live craps game with flash.

Aruze will highlight these products at the Global Gaming Expo, along with yet another product introduction that will turn more than a few heads.

“For us, it comes down to two words—unexpectedly defined,” says Fred Nunez, Aruze’s global director of product management. “We’re creating things you wouldn’t expect from Aruze, but you could say that if anyone would do them, it would be us.”

For new games on the slot side, Aruze’s game developers have taken care to create games exploiting the best features of each cabinet style.

The Muso Curve-43, with its 43-inch curved vertical monitor, designed in a “J” shape, features LED backlighting and an ergonomic glass-table button deck with a 13.3-inch LCD touchscreen interface. The Hybrid version of the cabinet adds an integrated base including a comfortable footrest and full-length LED web lighting. The Muso Triple-27 and Triple-27 Hybrid bring similar features to a three-monitor setup.

The 27-inch LCD toppers on both styles of cabinet are used for much more than the traditional attract mode. In many titles, the top monitor is integral to the game play, with animation, bonus features and progressive displays interacting between the topper and the game below. 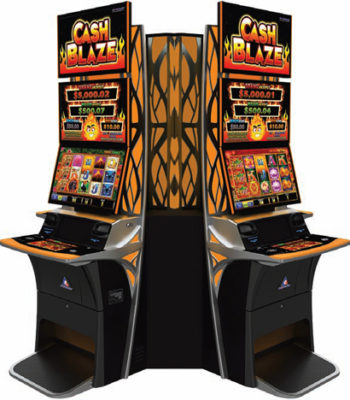 This year, Aruze once again adds to the Muso cabinet collection with the Muso Dragon, designed to highlight Asian games on the casino floor. Shining gold dragons perch atop a mountain of coins that connects the cabinets. Red button decks and custom lighting and footrests complete the package.

Meanwhile, the game library continues to grow for the Muso Curve-43 and Muso Curve-43 Hybrid, with a collection of games available on both versions.

Early this year, the company launched the Frontier Spin collection, the four games in the series each centered around a different wild frontier animal, its image staring out of the center of the 43-inch monitor and coming to life for various bonus events.

Casinos have been featuring banks that mix and match the games Frontier Spin Wolf, Frontier Spin Bison, Frontier Spin Bear and Frontier Spin Stag. The banks are particularly compelling because of the animation on the 27-inch toppers, which flows from left to right across all games on the bank.

Large icons representing the three bonus events stream across the top boxes until a player triggers one, causing the icon to stop at the top of that machine and travel down to the reels. Bonus Wheel sends down a giant wheel for a spin that awards a credit amount or one of four progressives. Ultra Big Reel offers the same potential awards on a single giant reel that travels down for the bonus spin.

If Super Pick Jackpot stops above one of the machines, the player enters a picking bonus to match icons of one of the four progressives.

The bonuses are triggered by overlays that appear over the four-by-five reel grid.

Joining this game is a collection of standout games for the Muso Curve-43 cabinets, most bringing a new twist to a popular game mechanic.

Such as multipliers. That’s what the X Wheel game is all about. The heart of this title is a bonus wheel with nothing but multiplier numbers on it. As with Frontier Spins, the games in the series are distinguished by a central character—X Wheel Panda, Lion, Chili or Tiki.

And finally, there is a mystery event that can land one of four progressive jackpot levels. Any wild symbol may randomly trigger the Jackpot Wheel. Flames appear as a wheel containing just progressive slices spins to a guaranteed award of a Mini, Minor, Major or Grand jackpot.

According to Sims, the game family, recently launched in casinos, is being paired in groups of the Panda and the Lion, or others with the Chili and the Tiki. Aruze provides a sign package for each.

“It’s a really great mix of game play,” Sims says. “The performance has been fantastic for us, and a huge part of it is the anticipation that occurs until the very end of the feature, when the bonus is at least doubled. Also, you trigger one of the two features with great frequency. That is a huge part of what’s drawing people to this game.”

“We’ve had this out for two months on one test bank, and it’s been the No. 1 game for both months, against all the major competitors,” notes Nunez, who adds that the No. 2 game on the same test bank has been another Aruze game, Coin Collector on the Muso Triple-27 cabinet. 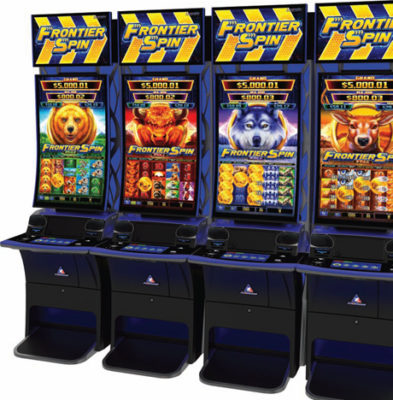 Another standout on the Muso Curve-43 is Raging Volcano, another game using wild symbols and multipliers to spice up the action. During both primary and free-game play, flame symbols randomly steam from the volcano centered on the monitor down to the reels, awarding wilds and wild multipliers.

“This can happen quite frequently,” says Nunez. “The nice part about this game is the amount of pays in both the base game and the free games, giving substantial meat back into the base game. It’s something the industry has been slowly shifting away from because everybody’s bonus-happy.”

This game also features a four-level progressive. In this case, each jackpot displays different-colored gems. If three of the same colored gems land on the reels, it triggers the corresponding jackpot, up to a Grand resetting at $5,000.

The Dig Dug games are based on the arcade game of the same name, which features Pookas, red creatures wearing comical goggles, and Frygars, fire-breathing green dragons, who are chased through an underground maze by Dig Dug, the protagonist controlled by the player.

In Aruze’s Dig Dug Pooka and Dig Dug Frygar, if the Pooka or Frygar character appears on the reel directly below Dig Dug, the main character will pump them up until they explode into wild symbols.

When a rock symbol appears on a reel, all symbols below the rock will become wild. During free games, reels expand to eight rows high, with 60 lines. The jackpot can be triggered any time a gold coin appears. Fifteen individual spinning reels appear. Frygar or Pooka will be held as the player tries to fill the column for the jackpot above. If Dig Dug appears, he increases the jackpot level for that column.

Wacky Gator is based on a Namco series of whack-a-mole-style arcade games. Aruze’s Wacky Gator Green River and Pink River both offer a wild feature, triggered by the Gator character. If three hiding Gator symbols appear, players will select one to reveal eight free games, Gator Respin or a credit prize. Gator Respin is a hold-and-spin feature in which three spins are awarded to collect Gators with credit awards. If at least one Gator is collected on a spin, three more spins are awarded. If Gators fill all 15 reel spots, it triggers the Grand Jackpot.

The Curve-43 games are joined by a collection of new offerings on the Muso Triple-27 format, headed by the Cash Blaze game family.

The game family also offers a new twist on the cash-on-reels mechanic. Any three cash-on-reels bonus symbols award all their prizes and retrigger the spins. These prizes can include static bonuses and progressive jackpots.

Another new game series on the Muso Triple-27 is Fortune Drums, a wheel game with four inaugural games in Zodiac Beasts, Bag of Wealth, Dragon Boat and Chinese Luxury.

When the main bonus is triggered, the Fortune Drum blares out three beats with the words “Don! Don! Don!” (It’s the Asian version of how a drum sounds.) That triggers another synchronized bank display. Credit awards and the four progressive jackpots stream across the top monitors of all the games in the bank, dropping the award down to the triggering machine. “Because this synchronizes all the way across the bank, it really gets your attention when someone enters the feature,” says Sims.

One of a Kind 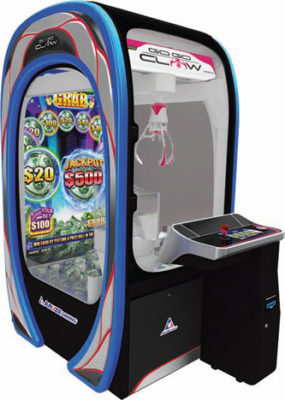 The more-or-less standard cabinet setups of Aruze, as normal, are joined by several games that are one-of-a-kind presentations. On the Muso Limited community-style cabinet, Dragong Phoenix and Dragong Lion feature a community event in which the giant Dragong wheel will spin across all connected games. Wheel spins are joined by free games and wild symbols.

For the Aruze-exclusive Roll to Win Craps, the radical hybrid electronic craps table that places electronic wagering stations on a standard table that features a back display formed by a series of LED panels, new features have been added as a result of feedback from customers.

The game now features adjustable wagers rather than a fixed bet. Above the C&E bet on the layout are now two Hop bets.

On the display, the company has added a “Roll the Dice” cue after bets are closed prior to each roll. “It’s a cue for players and surveillance,” Sims says. “We want to focus on making it easier for the operator.”

Another change is an enhancement of how the dealer—only one, as opposed to four in a live game—earns and collects tips. “It now gives a range of tips selectable by the customer,” says Sims. “We recommend electronic tipping, but some casinos have internal controls—they want to be able to print their tip tickets. So, we’ve added that functionality as well.

“From our perspective, we want to offer as many options as possible, because many casinos operate their pits totally differently. So, the more options we have, the more we’re supporting all our customers.”

“This is going to be the thing that captures the next generation of craps players,” says Nunez. “We saw craps dying off across the U.S. Something like this is going to get people to keep playing craps.”

Finally, in the never-before-seen category from Aruze is a completely new type of offering that harkens back to the days of carnivals and arcades—a casino claw machine.

Go Go Claw resembles the claw machines at the arcade in which you manipulate a construction-style crane to grab trinkets, watches or other prizes. But in this case, you’re manipulating a claw with a joystick and touchscreen to grab plastic balls filled with bills representing cash prizes, and move them to a prize chute to win a credit award.

It is an RNG-based game, but the simulation of skill is compelling. The player feels as if he or she is actually manipulating the claw. The return-to-player percentages are similar to those found in normal slot machines, and the two titles—“Cash Grab” and “Grab It!”—are presented in dollar denominations.

Go Go Claw is another example of how Aruze is redefining the slot floor experience.

“Just as with Roll to Win Craps, this is something that players already know how to play, but we’ve reinvented it,” says Sims.

“We’re defining the boundaries of what gaming can be. When you look at something like Go Go Claw, it’s something that everyone understands how to play, but it’s reinterpreted in a way that it’s totally new, and feels really exciting.”