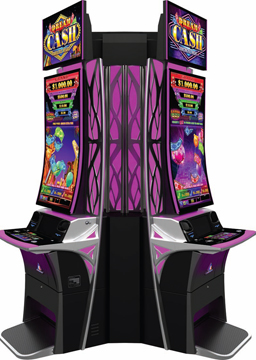 Aruze Gaming has consistently distinguished itself for out-of-the-box thinking, not only in its growing slot library but in the hardware on which it resides.

The company has doubled down on unique products in the past like Paradise Fishing, with its community-style fishing bonus that has players using a clever joystick to physically “reel in” credit awards; electronic table games like Shoot To Win Craps (and now, Roll To Win Craps); and hits like the Ultra Stack series of video slots.

This year, Aruze once again forges ahead with more pioneering on all fronts. On the hardware side, the company will use G2E to introduce the new Muso Triple-27 Hybrid to complement the recently introduced Muso Curve-43 Hybrid. These cabinets combine the designs of the Muso Triple-27 and the Muso Curve-43 cabinet, which was launched at ICE in February.

The Muso Curve-43 features a 43-inch curved vertical monitor, designed in a “J” shape. It features LED backlighting and a large ergonomic glass-table button deck with a 13.3-inch LCD touch-screen interface. The new Hybrid version features an integrated base that includes a comfortable foot rest, and includes the LED web lighting of the Muso Triple-27, extending the full length of the cabinet.

Aruze will showcase a unique pod design called the Muso Curve-43 Hybrid Reflection package. According to Aruze Product Manager Laura Sims, “The reflection pod fillers create an upscale package that can draw attention from any angle.

“Because the Muso cabinet has such amazing LED lighting on the back of the cabinet—no one else really has that—we have some packaging options no one else can offer,” Sims says.

According to Sims, the attraction of the cabinet lies in its lighting package. Between machines in a bank are mirrored “reflection pod-fillers,” which are mirror-finish metal that shine and reflect the colorful lighting from the back of the cabinet. “It makes a huge difference,” she says. “It creates a ton of attention and creates a real superior feel on a core cabinet.”

The integrated foot rest continues the style and unique lighting all the way to the floor. “It keeps that cohesive look,” says Sims.

The cabinet is being launched with a new game series called Dream Cash. The inaugural games are the neon-tinged Dream Cash Fabulous Vegas and the disco-themed Dream Cash Dancing All Night. “It’s important this game be banked a little differently and stand out, because it is a non-traditional slot,” Sims notes. “In fact, it has no spinning reels.”

Dream Cash uses the 43-inch portrait monitor to display a scene of colorful floating bills and balloons. The idea is to use the touch screen to grab as much of the falling cash as you can, in what Sims calls a “play-as-fast-as-you-like game.”

The bills trigger any number of other events, from credit prizes associated with bills of different colors to extra free picks, or tickets that trigger separate bonus features like a prize wheel or a “pull to win” bonus game.

One of the tickets reveals an instant trigger to a Fortune Jackpot Bonus picking game to win one of four progressive jackpots. Five tickets each reveal a “Lasso the Money” interactive bonus game or a wheel spin for a credit prize.

The player can select from three volatility models or press the spin button to make a random selection. The player chooses a color of a bill, according to a volatility scale at the bottom of the screen. “The player can opt for lots of little wins or fewer bigger wins,” Sims explains.

Dream Cash debuted at spring’s Indian Gaming Tradeshow, but Sims predicts it will be fully launched and approved by G2E. “Dream Cash has no spinning reels, so it’s basically bonus play, all the time,” she says. “It was inspired by the success some of our competitors have had with that style of game play, but we think there’s a bit more ‘game’ in our game, in that there are multiple bonus features.”

Dream Cash heads an Aruze G2E game lineup presented under the tagline “Ignite Fun.” It also is part of the “Activ-Play” series, which showcases the company’s strategy of providing non-traditional slot games.

“All Activ-Play games contain a non-spinning reel aspect to one of the core game features,” Sims explains. “Something core about how that game plays is not spinning reels.”

The granddaddy of the Activ-Play series is Paradise Fishing, but its latest addition is Hawaiian Fishing, which takes the signature community fishing bonus to the shores of Oahu. For the community fishing bonus, players use a controller improved with the last sequel, Amazon Fishing, which includes a crank that gives the sensation of reeling fish in, with the same tension on the line featured in previous iterations.

“For Hawaiian Fishing, we’ve added some new features, but at its core, it’s the game that players know and love,” says Sims. “There are still a lot of units of the original version out in the field—the age of that game and the size of the installations really say something.”

The next in the style of wall-banked community games—the portrait cabinets on each of the slots link together into one huge screen for the community bonus—is a game previewed last year called Mad Mountain Riches. On this game, the scene formed on the giant monitor wall is a talking volcano, which periodically erupts to send lava that transforms into wild symbols on players’ screens.

While Activ-Play concentrates on offering unique play options, Aruze brings the same creativity to all of its core groups of slots, many of which improve upon time-tested game mechanics.

One of the highlights is a new version of the Ultra Stack series of games featuring stacking symbols and wilds. Ultra Stack Instant Trigger offers a “buy-a-feature” option in which the player can increase the awards by betting up. The basic game is played for a minimum of 50 credits per spin, but a 75-credit wager unlocks “Super Feature” free games, which adds anywhere from 100 to 250 of a key symbol to the reels.

Betting up again activates the Instant Trigger, which guarantees a random number of free spins.

The first two games in the series are Dancing Panda Festival and Dancing Panda Fortune. “These games have a great mix of added wild features, with a symbol/mystery bonus,” says Sims. “Every time the symbol appears, you get a chance at triggering the progressives. They’re cute games, but they’ve got a great amount of gambler-style play.”

Another standout release this year is the “Change of Seasons” series, with Japan and China versions. In this game, the volatility changes with the season, with subtle changes to the elegant artwork depicted on the screen. “This is different from any other kind of game,” Sims says.

“The volatility ratings for the symbols and pays are going to change depending on the season. There will be a background effect, and the game will shift from spring to summer and give you a different gaming experience. It will be subtle, but something players will notice.”

New titles scheduled for launch at G2E include games with persistent-style bonus features. In Bonanza Town, it’s a chase feature for the bonuses. In Coin Collector, it’s a hold-and-respin style of game with a “what you see is what you get” payoff.

Great Spirit and Great Tiki include a feature in which the player is chasing a progressive free-games award as opposed to a progressive credit award.

Asian themes are highlighted by Fu Cai Tong, based on the math of the hit game Fu Lai Cai Lai; Big Fireworks, with wild symbols that trigger a bonus and a four-level progressive; and, on the premium Muso Limited cabinet, Dragon King and Fortune Gateway, which feature colorful concentric wheels awarding credits and multipliers.

Wheel games, in fact, figure prominently in Aruze’s G2E lineup. Two more titles will be introduced in the mega-hit Wheel of Prosperity series of multi-level progressive wheel games on the Muso Curve-43 cabinet. The new entries are Wheel of Prosperity Serpent and Tiger. “On Serpent, the wheel will spin and give you wilds for each of your free games,” explains Sims. “Tiger offers the option to expand reels to four rows or five rows.” Reel expansions in the ways-to-win game take the game from 243 ways to win up to 3,125 ways for a random number of free spins.

This year, the game designer who created Wheel of Prosperity offers Wealth of Coins. “This game includes a lot of wild features,” says Sims, “one of which triggers other features.”

Also on the Muso Curve-43 is Rainbow Wheel, a curved version of the popular Rainbow Cash series.

Finally, several new releases are being launched on the extra-tall Cube-X Vertical 80 cabinet, including the Triple Burning Wheel series, with its stacked bonus wheels; the Wild Explosion series, with reels that expand up to nine rows on the 80-inch monitor; and the Ultimate Stack series, with a unique scrolling set of reels.

Meanwhile, on the electronic table game side, Aruze will feature Roll To Win Craps, previewed last year, an ETG configured as a live table but utilizing a back display facing players that is formed from a series of LED panels, which can be programmed to display each point, proposition bets, hard-ways, etc., or even as a medium for advertising, along with electronic play stations for digital wagering.

The craps ETG recently completed its first install at Harrah’s Cherokee in North Carolina. According to Brandon Knowles, executive director of interactive business and table gaming, the Harrah’s property has placed the unit right next to the regular craps table.

Also on the table side is an extension to the Lucky Roulette unit that allows remote machines. “This year at G2E, Lucky Roulette breaks from its standard eight-station configuration with an unusual layout that allows remote viewing and showcases the product’s full capabilities,” Knowles says. “The 12-station installation shows the potential of the 50-station capability of this product.”

G2E also will see the official launch of Big Wheel, the seven-seat electronic Big Six game previewed last year. In addition to the traditional game, the product includes bonusing and side bets that make things more interesting for players and raise the house edge for the operator.

“We focus on creating the best gaming experience for our players,” says Sims, “by delivering premium-quality products and outstanding service to our casino customers.”