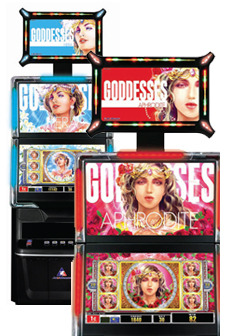 As the U.S. subsidiary of Japanese amusement and gaming supplier Universal Entertainment consolidates the gains it has made through innovation in both video and reel-spinning genres over the past five years, Aruze is adding new game genres designed to bring new, younger players to the slot floor.

It is a development meant to apply Aruze’s growing R&D prowess to new frontiers. Over the past five years, through the introduction of new game styles—ranging from the landmark Innovator stepper series to the elaborate top boxes of Innovator Deluxe, the tactile functioning of community-style games like Paradise Fishing in the G-Link series, and the emergence of its multi-station e-tables in the G-Link series—Aruze has been on a constant mission to broaden the appeal of its game library to cover not only current

demographics, but the emerging demographic of millennials that will dominate the casino audience before long.

As is becoming a popular strategy among slot-makers, the form precedes the function. In this case, it is the expansion of offerings on the new cabinet introduced last year, which was designed to capture new slot players.

This year’s Global Gaming Expo will serve as the coming-out party for the Cube-X cabinet, with new formats designed to expand its reach.

“We really designed Cube-X for a younger generation,” says Kelcey Allison, CEO of Aruze Gaming America, “because our customers are saying, ‘We want a slot machine that appeals to the millennials.’ Our Cube-X was designed ergonomically and aesthetically for that reason, to really capture the Xboxers and PS4 players.

“That’s really what the box is designed for—to appeal to that person but still not segregate the older demographic.”

Allison notes that Aruze equipped Cube-X with a processor the company calls APX, which he says is “the fastest processor in the industry right now.” Add intensified lighting, high-definition LCD touch-screen monitors and LCD touch button panels, and Cube-X becomes what the company considers the next generation of hardware on the slot floor.

Allison adds that in addition to technological and ergonomic advances, Cube-X is designed with the operator in mind. “There are no more hardware conversion kits; it’s all done electronically,” he says. “It’s much easier to convert a game; it’s literally a five-minute process. The door drop is a single door versus a whole belly door swinging out. We’ve redeveloped the whole drop-door system.”

Cynthia Gonzalez, product marketing specialist for Aruze, adds that Cube-X provides marketing advantages for casinos as well, particularly in the form of customizable LCD toppers. “What’s nice with the toppers is that the casinos can do their own advertising on them, not just artwork from the games,” she says—from weekly events to a birthday message for high-end players.

According to Allison, there are three platforms being launched in the Cube-X—the basic Cube-X video slot, the Cube-X Innovator stepper series and Cube-X Ultimate, which features prominent top box events. The Cube-X Ultimate was launched in August with 999.9 Gold Wheel, a premium three-reel video slot topped with a basic wheel bonus that can lead to one of four progressive jackpots.

The game was designed to look and feel like a certain famous wheel game from another manufacturer, but unlike that famous game, Gold Wheel will be available for sale as well as lease/participation.

“For years,” explains Allison, “we have had people coming up to us saying, ‘Can we just buy this product instead of doing participation?’ Our president came up with an idea of taking The Gold, our most successful game, and transforming it into Gold Wheel. It is a non-WAP linked progressive or stand-alone game that you can lease or purchase.”

A second game in the genre, Gold Legend, includes a two-level progressive and multiplier with the wheel.

To be available in the first quarter of 2016, the Cube-X Ultimate Vertical cabinet features high-definition 3D that Allison says “actually moves,” and a massive display comprised of two stacked, 42-inch vertical monitors. “The technology is going to blow you away,” promises Allison. “On one game, there is a 14-level progressive. On another, the reel strips go all the way to the top of the game. It is amazing.”

The first titles on Cube-X are already in the field and turning in outstanding numbers, Allison says. New video slots being launched on the Cube-X at G2E include Extreme Dragon and Extreme Phoenix, 243-ways-to-win games featuring the Extreme Progressive, won through wild symbols and a bonus event; the “Goddesses” series, with “Mighty Symbols” spanning across three reels to create a nine-symbol stack for a re-spin feature; and the “Golden” series of high-volatility progressives, being launched with the games Golden Diamond and Golden Heart, both 243-ways-to-win games with bonus picking rounds winning one of four levels of progressive jackpot.

Cube-X also is being used to expand the “Ultra Stack” series of games that feed stacked winning symbols and stacked wilds to the reels in mystery events that have proven wildly popular with players.

“Ultra Stack has been our biggest video success in the past two years,” comments Allison. “We have around 30 different titles in five different product families in the group.”

Also featured in Cube-X video is a new “X” series of games in which free-game wins are multiplied by two to 10. Titles include Tokyo Rose X, Kabuki Master X,  Tokyo Rose X and Dragon’s Fortune X.

The Cube-X games join a wealth of other video slots being launched in the G Series, which features simple, low-denomination, volatile games with free-spin bonus events. Launching at the show will be the 1,024-ways-to-win Charging Bull, Asian-themed games with beautiful art including Streaking Dragon and Streaking Beast Tiger, and Master of Wealth with its golden Buddha-like character.

The Asian games were designed to boost the flat Australian market, but according to Michael Maley, marketing specialist at Aruze, a recent focus-group test indicates they will be a hit in North America as well.

“We had a player’s event at Green Valley Ranch, and the Australian games were really popular,” Maley says. “Players were asking us where they could find the games on the floor so they could go out and play them.”

The reel-spinning genre gets a big boost from Aruze this year with a group of games on the Cube-X cabinet. Games in the Cube-X Innovator series, hybrid slots with spinning reels and bonus features in a top-box monitor, are already in the field, and many more will be launched at G2E.

The debut Cube-X Innovator title, already in the field, is Apex Gorilla, a five-reel, 30-line stepper with a free-game bonus determined by a roulette-like spin of flashing numbers on the top-box LCD monitor. Lights flash around the display until landing on a number of free spins, which can be as high as 100. Like other Aruze games with a high number of free spins, the player has the option to take a straight credit amount rather than sitting through all those spins.

Another highlight in the new Cube-X Innovator series is a new addition to the popular Cherry Chance series on the original Innovator stepper series. Released at the end of August, it’s called Cherry Chance Thunder Seven.

“One of our biggest hit product lines in the Innovator group is the Cherry Chance series,” says Allison. “We have about 15 different titles; it’s been massively successful for us. Cherry Chance Thunder Seven goes into a ‘Storm Bonus.’ The reels vibrate with a great anticipation feature.” Chances of “7” wins increase during the free games. “I think players are going to absolutely love it,” Allison says.

The Cube-X Innovator also houses a new progressive series called “Burning Hot Jackpot.” Initial titles Aztec Sol, Howling Wolf and Great Inca, all popular Innovator titles brought into the new format, feature a “Progressive Challenge” at the end of bonus rounds, in which the flashing roulette-style display on the top box spins to a credit award or one of four progressive jackpots.

“What’s nice about this set of games is that the operator can turn the progressive feature on or turn it off,” says Gonzalez. “When it is disabled, the machine is the original game that was on Innovator.”

“We took some of our best titles of the Innovator series and put nitrous oxide in them,” says Allison. “And this comes in a three-game package that is linked.”

“Magnificent 7 was a buy-a-pay game that was hugely popular,” says Allison. “We reincarnated it with Luna Del Sol and Super Magnificent 7. (Luna Del Sol is a clone of Magnificent 7.) Prior to Wheel Of Fortune, Midas Touch and Magnificent 7 were the two most popular slots in the gaming industry. They have not been released since the early ’90s. Some of our biggest customers have said if you re-release them, you’re going to decimate the three-reel sector (for other manufacturers).”

Triple Double Nutty Jackpot, to this day, is the No. 1 slot game in South Africa, in the old Universal platform (“super-glued and duct-taped together,” says Allison).

The new classic steppers, designed for dollar play, improve on the three-reel platform released two years ago with six-inch reel strips that Allison says were too large and appeared too slow. The new Cube-X Innovator games use four-and-a-quarter-inch reel strips with softer lights, and the new cabinet.

“We’re very excited about our three-reel product in this category,” Allison says. “We think it will be a slam-dunk.”

Rounding out the Aruze collection this year are community-play games both in the slot and table-game areas.

On the slot side, the company is releasing a two-game version of Player’s Party, the massive multi-wheel community game released last year as a follow-up to the hits Paradise Fishing and Amazon Fishing. “Customers told us Player’s Party has great play mechanics, but it takes up half their casino wall,” Allison explains. “They asked, ‘Can you come up with a two-pack version of the game?’ We released it in August, and it’s going to blow your socks off.”

On the table game side, Virtual Roulette solves a problem encountered placing multi-player electronic table games in many jurisdictions that do not allow table games or any physical table elements such as dice or, in this case, a metal roulette ball. “This is an actual roulette wheel with high-projection, 3D imaging, so there’s no ball, but it looks like it’s spinning,” says Allison.

“This will be our first step into the virtual world of electronic table games. We showed it at G2E Asia and had a massive response.”

Allison adds that casinos where table games are legal will add these games because there are no ball errors, and a lot of players have superstitions regarding the air flow of a metal roulette ball. And, unlike live table games, there is a bonus feature. For a dollar side bet, if the ball lands on the “Jackpot Chance” spot lit up on the wheel, a secondary jackpot round begins with a progressive starting at $2,500.

“We’re really excited about that, because it places another layer of interactivity on roulette, versus just having a ball go around,” says Allison.

Aruze is laying more layers on a wealth of game groups with this year’s G2E collection, the company’s largest ever—and a collection bound to take Aruze Gaming America itself to new levels.