For the past few years, Aruze Gaming has been redefining the electronic table game genre with its ever-evolving Roll to Win Craps, a hybrid electronic craps game on a normal-sized craps table with individual bet stations, requiring less than three dealers, and real dice for the shooters to throw.

Aruze had much experience in the automated craps genre, with its Shoot to Win Craps, in which players press a button to throw dice within a cylinder-shaped dice field, having enjoyed sustained demand at casinos in Las Vegas. The ETGs, though, were augmented by Aruze’s slot library, also ever-evolving. The company has continued to expand its Muso line of cabinets, with new form factors still being launched.

But one other distinguishing factor for Aruze is called Activ-Play. In short, it’s a category of games in which players actively, physically participate. It started with the 2011 release of Paradise Fishing, a community-style game setup that used a sort of joystick that simulated tugging on a fishing line as the player “fished” for bonus awards.

The company released several iterations of the fishing bonus technology within the subsequent few years, followed by Mad Mountain on the Muso Limited community-style setup. Then last year, the company took Activ-Play to a new level with Go Go Claw, an arcade-style game that applies slot math to the classic claw machines everyone remembers from arcades, bowling alleys and other public places.

It is like nothing else to be found in the casino. In the see-through chamber are plastic balls containing any variety of cash prizes. You use a control knob to manipulate the claw, grab a ball, move it to a bucket, and win the prize—just like at the bowling alley, all on top of a math program with a reliable theoretical hold percentage.

According to Rob Ziems, president of Aruze Gaming, the idea came from Aruze founder Kazuo Okada. “I was skeptical at first; I was concerned that it wouldn’t be very well received,” Ziems says. “I asked for 10 or 15 to try out, and we installed the first two at the D in Downtown Las Vegas, one downstairs and one upstairs. And immediately, they were a hit.”

Ziems says his first visit to the D after the installation opened his eyes to the appeal of the product. “It’s within 20 feet of a bar downstairs, and I sat down there on a Thursday afternoon,” he recalls. “It was 1 p.m. and there were crowds of people, really engaged in the product. I was sitting at the bar cheering for people. The energy was really exciting.”

By the time of the Indian Gaming Tradeshow in March, Aruze couldn’t make enough of the games. “At NIGA, customers were coming up to us and saying, ‘Hey, where’s mine? How come I don’t have one?’ Since then, demand has been high.”

By the beginning of August, 50 Go Go Claw units were lined up and ready to ship, and Ziems estimates at least another 50 will have been delivered by the time of the Global Gaming Expo. He says some customers who had placed one of the leased units are asking for more —the D and Circa ordered four new units.

Aruze hopes to replicate that success with two new Activ-Play games to be launched at G2E this year, both radical in their ideas and nostalgic of popular arcade games. It will be accompanied by new entries into the Muso line of cabinets, and a good supply of new game titles that fit perfectly with the new hardware.

Midnight and the Dragon 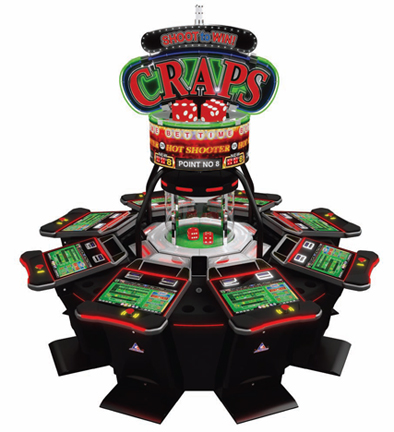 At this year’s G2E, Aruze will launch two new entries into the Muso cabinet family, first with the Muso Curve 55 Midnight Edition, featuring a honeycomb pattern design, a midnight black color and high-resolution graphics on the 55-inch J-curve monitor.

“The overall cabinet design, which has been well-received in the market, was developed with the whole player in mind,” says Josh Collins, vice president of sales for Aruze Gaming. “To maximize large-screen game play, the sound woofer is strategically placed in the gaming cabinet’s lower stand, transferring the bass directly from the cabinet to the player, allowing the sounds to enhance the player’s gaming experience.”

Muso Curve 55 is available for sale. “We’ve got highlight titles that will be exclusive to the Curve 55,” says Ziems. Those include X-Wheel Supreme God, X-Wheel Supreme Dragon, Gong Cash Dragon and Gong Cash Lion.

Special bonus symbols in the collect feature add additional spins, resulting in more chances to increase the bonus prize total. There is also a chance to win a wheel-selected jackpot when wild symbols appear on primary-game spins.

The Gong Cash games feature a compelling collection/pot feature that leads to a picking bonus in which one of four jackpots can be won. There also is a hold-and-re-spin bonus in which the player collects cash-on-reels symbols.

Collins says many of the new titles on the Curve 55 Midnight Edition will also be available for other Muso cabinets like the Muso Curve-43 and Curve-43 Hybrid. “We’re not obsoleting the 43 or the 27,” he says. “A lot of the content will be cross-compatible between the platforms.”

Ziems adds that there will be for-sale titles on the Midnight Edition. “Typically, those larger cabinets are premium cabinets that are lease-only, but we’re going to offer titles with that box that customers will be able to buy,” he says.

Aruze will also showcase the Muso Dragon cabinet at G2E. This cabinet features 3D signature in-pod configurations of four, six or eight, complete with 3D cabinet signage and an elegant Asian design featuring two golden Chinese dragons at the top, ancient golden coins between gaming cabinets, and firecrackers at the end of the bank, all symbols of luck and good fortune.

During the base game, the reel format expands up to four extra symbol rows when bonus symbol appears on reels 2 and 3. Wild symbols stick during the Wild Hold Spins. During each free game, the reel format randomly expands up to four extra rows and wild symbols may appear randomly across the reels. A Jackpot Feature may be randomly triggered on base-game spins, and mystery credits can be randomly won in bought games.

In addition to the launch of the new cabinets, Ziems says Aruze will introduce newly improved versions of the other Muso cabinets. Muso Curve will be displayed with a 55-inch screen as opposed to the standard 43-inch, and the Triple 27 Hybrid will be displayed as a Triple 32, with three 32-inch screens.

Meanwhile, Aruze will display improvements to its Roll to Win Craps game, as well as a new version of the popular Shoot to Win Craps.

According to Ziems, the company will show improvements to Roll to Win that enhance security. “One of the things we learned when we put out that table was that while there are benefits in reducing the head count that’s necessary to run the table, there are fewer people watching the table,” he says. “And so, in working with our customers, we’ve learned that there are some security enhancements that will benefit them greatly. We’re excited to debut some of that at G2E.”

Collins says the company will debut the first updated version of Shoot to Win Craps, featuring new sounds as the “shoot” button is pushed—“It pops when you hit it,” he says—as well as updated technology to run the game.

“The existing Shoot to Win in the field is on an old platform, the AP7 platform,” he says. “We’re making some modifications, upgrading it and putting it on the APX platform.”

He adds that the Shoot to Win game has never slowed in its demand. “Most of them go out on lease, but over time, we get quite a number of customers who want to buy it,” he says. “It’s been one of the most successful products we’ve had. It’s 11 years old, and there are still a lot of them out there. We still get orders for them.”

The opportunities to expand on the success of Aruze’s unique craps games, of course, is accompanied by innovative new entries into the arcade-style Activ-Play lineup—gambling versions of a couple of the most popular carnival and amusement games in history. One based on a childhood game everyone knows is Rock, Paper, Scissors. “Fairly simple,” says Collins. “You wager on one of three buttons—rock, paper or scissor. The game goes through the cycle, and you win or lose.”

While it’s a simple enough proposition, the excitement can build on the game, with rapid decisions and a one-in-three chance of winning every time.

Another traditional arcade game re-created for the slot floor by Aruze is the familiar whack-a-mole machine. In this case, it’s a gator, in the game Wacky Gator. “It’s a digital version of the whack-a-mole game,” Collins says. “Instead of whacking with a hammer, it will utilize the touch-screen, as well as physical buttons.”

As demand remains high for Aruze’s products, the company can now deliver them more efficiently, thanks to a new Las Vegas headquarters location that combines three functions that formerly took place in three different locations.

“We wanted to combine our administrative role—the executive offices—with the manufacturing facilities and our service group, which were all in different locations,” says Ziems. “We’re really excited to have it all under one roof now. It was creating some inefficiencies. We were all within about a five-mile radius, but it was hard to get everybody together to have meetings. Now, all the departments are together.”

Currently, the Las Vegas facility is the final assembly point for products that are developed in Tokyo and manufactured in the Philippines. Ziems says it’s possible the company could establish a new U.S. facility, particularly for the digital side of the business. “We’re in earnest making a move into iGaming,” he says. “We hired a new vice president of iGaming (Kurt Hansen). Our CEO (Yugo Kinoshita) has relocated from Hong Kong to the U.S., and he’s living in Northern California, so it’s possible we will work toward developing an iGaming studio in Northern California in the next couple of years.”

As Aruze develops its digital division, the company will continue to stretch the envelope of what will succeed on the slot floor—including more games like Go Go Claw, which Ziems says has delivered on its promises, from customer excitement to the theoretical hold. “Casino operators are very happy,” he says. “There are many places where they want more.”

More is certainly coming from Aruze.