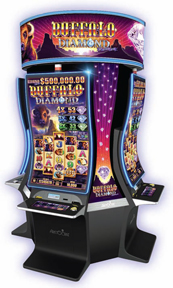 In Eilers & Krejcik’s November 2019 report, Buffalo Diamond was No. 1 on the Top Indexing Games, Premium Leased list, where Aristocrat has 17 of the top 25 titles.

Buffalo Diamond was created to mark the 10th anniversary of the classic Buffalo game. It features free games, 2x and 4x multipliers, and iconic design elements from the classic version of Buffalo.