AGS arrives at G2E with an unprecedented diversity of slot product, thanks to rapid expansion of its R&D studio system 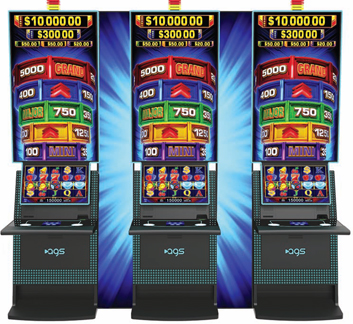 When one considers the rapid rise of gaming supplier AGS, 2019 is shaping up to be a pivotal year. In January, the company opened its second game development studio in Sydney, Australia. In February, the company increased its footprint in Oklahoma by around 2,500 games with the acquisition of Oklahoma route operator Integrity Gaming Corp.

AGS will feature 70 games and more than 30 unique game titles for Class II and Class III markets at G2E, and, including the new Orion Upright, will display three new cabinets.

“This year will be our biggest show, with the largest amount of titles and products we’ve ever shown,” says Mark DeDeaux, AGS senior director of slot products. “Our roadmap looks better than ever. As you know, we’ve added a lot more studios, so we’re going to see a lot more product diversity.

“We’re excited about not just the expansion, but about the new look and feel to some of the games, while staying in line with our focus and discipline around math.”

“This is not an exaggeration—I honestly think this is our most exciting G2E since I’ve been at the company, in terms of number of new products we’re going to be showing,” says Andrew Burke, senior vice president of slot products. “For us to show three brand-new products at the show is really something I’ve always dreamed of, from seeing our humble beginnings to how far we’ve come today. And it’s the evolution of a lot of our investments over the last three or four years. We’re really seeing the fruits of all that labor.”

The starting point for the new content pouring out of the expanded AGS studio system is the hardware. The company will show exclusive games for the new Orion Upright, the second dual-screen cabinet in the Orion series. First previewed at G2E 2018, the cabinet features dual 27-inch HD displays, an ergonomic LCD button deck, dual high-bright spin buttons, an integrated charging port, and the signature AGS starwall lighting display.

The two new G2E hardware launches for the Orion family are the larger-format Orion Rise and the first curved-monitor portrait game in the family, the Orion 49C.

The Orion Rise has all the standard Orion attractions, like the signature U-shaped starwall design, which surrounds the reel arrays with 420 game-controlled LED lights that change color based on game events, music and sounds.

But between the slots in banks of this game are signage panels that give a unique look with 8-foot-high HD LED “totem-style” displays. The unique part is that events in the games themselves trigger synchronized lighting and motion graphics on the totems between the games, with game-specific attract features.

“These are LED panels that have game-specific content, to add another layer of display,” says DeDeaux. “We think the Orion Rise is really going to be attention-grabbing, and the totems having that extra height and extra brightness for the game animations will attract players.”

“This is the most new hardware we’ve featured at a gaming show,” DeDeaux says. “Early numbers and performance on the Upright are great. We initially launched the Orion family with the Orion Portrait, which was great because a lot of the market is heavy in that single-screen, vertical kind of discipline. Then, we launched the Orion Slant, which is typically a little more niche-like in where it goes on the floor. We have some great success stories with that product.

“Now, we have the dual-screen Upright, and we will launch our 49C and the Rise. We now have a more full, complete product offering. At AGS, we’ve had good success with a narrow product offering. Now, we’re going to expand that product offering to become a complete, full supplier. We’re hitting all the different areas of the product market, and all product segments.”

In addition to the new cabinets, AGS will use G2E to launch one more ancillary product that company officials say will change the way casinos look.

“It’s a new merchandising package that we’ve targeted for the premium product space, and it is a game-changer,” DeDeaux says. “It is truly innovative in how we packaged it with our games, and in its design.”

With a complete lineup of cabinet styles, AGS has used its expanded R&D studio teams to tailor games to each form factor. The 30 unique new game titles the company will have at G2E will include exclusive launch titles for each new cabinet, as well as a wealth of new titles for the original Orion Portrait and Orion Slant.

Shannon Leyden, AGS junior product manager, says the new titles reflect the benefits of the expanded R&D network. “We’ve been really focused on research and development,” Leyden says. “Over the past couple of years, we’ve grown our R&D headcount by 51 percent, and have expanded our total number of studios from two to five. This is an investment that will be clearly visible as you walk through our booth at G2E this year.”

“Our robust roadmap has over 100 games that we’re planning to launch into early next year,” says DeDeaux.

DeDeaux adds that games from each studio have their own character. “Our Atlanta studio games have a certain look, and they do very well,” he says. “As we expand to new studios, you’re going to see different graphics, different animation, different math, and a lot of different game mechanics. I think we’re going to get some really exciting stuff out of the combination of this diversity added by the new studios.”

Inaugural games for the new Orion Rise to be shown at G2E include Wheel Surge and Dragon’s Jackpots. Wheel Surge is a compelling video slot with a wheel bonus and five-level progressive in stunning graphics that fill up the oversized top monitor. The wheels are displayed as horizontal stacks, with spots on the wheels yielding credit awards or one of the progressives.

Dragon’s Jackpots applies an Asian theme to a ladder-style bonus displayed on the top monitor, and Blazing Wheels uses dual wheels in a traditional wheel-spin configuration.

“These are games that focus on working your way to better wins, and

really using that 55-inch top monitor to its full potential,” says Leyden. “For these first-run titles we felt it was important to create a compelling and entertaining experience for the player, truly exploiting the cabinet’s form factor. In the future development of the Rise we’re focused on bringing on additional features and functionality that will keep players coming back for more.”

The Orion 49C, the first AGS offering in the curved portrait monitor segment, will offer titles for lease and for sale, with some cabinet-exclusive titles. “It offers 4K resolution, and will feature 3D animated characters, 3D animated symbols, and fresh new game mechanics,” says DeDeaux. “The portrait cabinets are all the rage, and our launch themes on the Orion Portrait are still doing extremely well, with great numbers across the country. We feel confident that the 49C is going to follow in its footsteps.”

One of the highlighted games on the 49C is Royal Phoenix, which fills the curved monitor with beautiful artwork depicting a rising phoenix behind the reel set. “This one is just beautiful,” says Leyden. “Everything is in 3D animation; it’s just eye-catching. It offers a well-rounded gaming experience using not just the software, but the hardware as an integral part as well.”

The games launching on the new formats will be accompanied by a wealth of new content for the Orion Portrait and Orion Slant. One highlighted game series from the new Australian studio is Lucky Stacks, a series of games built around a four-level progressive that will be available on both the Orion Upright and Slant, as well as AGS’ legacy ICON cabinet.

The games in the series feature a unique mechanic involving stacked symbols with golden backgrounds—the progressives are won by stacking entire reels of the golden symbols. On spins where no stacked gold reels land, a special symbol randomly “nudges” a gold to fill the entire reel. A special “Lucky Stack” symbol causes all golden symbols on the screen to stack.

Another new game family featured on both the Orion Upright and Orion Slant is Money Charge Jackpots, in which the progressives are won through a hold-and-spin free games feature.

DeDeaux says AGS now has a complete offering in portrait-style games. “Our portraits have done so well,” he says. “There’s a lot of value in what we’ve invested in evolving the portrait. We want to keep that brand consistency.”

DeDeaux says the totem lighting included in the bank package on the new Orion Rise will evolve slot-bank presentation. “Something like this can accent areas within a casino floor, because it’s fully animated,” he says. “The technology is evolving for us to be able to have everything that’s displayed on the sign actually interact with the game.

“What we can do from an interactive standpoint in animation and graphics is just very unique in our industry. We see these taking an area of a casino floor and adding a lot more energy around it.”

Burke says AGS is always looking to expand the portfolio with new game styles, such as working high-denomination offerings into the mix.

“In the past we’ve looked at it; we’re looking for ways to use our current portfolio to address needs in that market,” he says. “I think there’s more need for a high-denom product than there ever has been.

“We started as a very niche company with a narrow focus, and every year we expand that focus a little bit broader. So, that allows us to start thinking of different categories we’ve never been in and say, ‘Hey, is there something we’re good at?’ Because you’ve got to be good at whatever you go after.”

Burke says this year’s G2E will define the company as a more complete supplier, and will carry some surprises. “One of the products we’re going to show is literally going to be show-stopping,” he says. “It is going to be stunning.”

DeDeaux says G2E 2019 launches AGS into its next stage of growth, thanks to the work of the expanded R&D team. “Now you can see how we’ve really filled out our product portfolio,” he says. “You’ll see the Rise, which we are targeting for launch at the end of this quarter. And the 49C, which is another portrait-style game with a curved monitor.

“The big story here, and what we’ve communicated to our customers, is that we are really evolving into a full-service, full-suite product supplier. And we can really hit all segments of the market—for-sale, premium—and we have this new, innovative design that is uniquely AGS. We’ve filled out this product portfolio, we’ve built up studios that will be available to support all these new hardware configurations, and we’ve really developed the discipline to help manage the R&D part of the business, so we can continue to create great games.”