In 1987, Deadwood, South Dakota became the third U.S. jurisdiction to legalize casino gaming after Nevada and Atlantic City. Now surrounded by competition, the Gold Rush town has circled the wagons with the introduction of craps, keno and roulette. 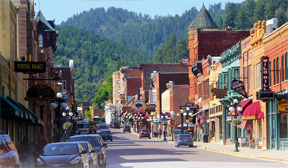 Deadwood, South Dakota likes a good gamble, especially when it pays off. In the late 1980s, voters bet that casino gaming would bring new life to a Wild West town struggling to survive on seasonal tourism and a few jobs at the old Homestake gold mine. As then-Mayor Mike Trucano said, Deadwood had “about 10 shops that sold rubber tomahawks nine months of the year, and were boarded up the other three.” The county courthouse had closed due to structural problems. Other historic structures were beginning to crumble.

Current Mayor Chuck Turbiville remembers it well. “There were a lot of vacant buildings. The tourist trade was down. There wasn’t a lot of retail. We had water and sewer that was 60, 70 years old that we couldn’t afford to upgrade. Sure, we had the bars and the restaurants and the historic atmosphere, but they weren’t paying the bills. Deadwood was in tough shape.”

The last straw was the December 1987 fire that ignited a century-old Main Street building, and threatened a whole city block. The town’s water lines were low on pressure, so firefighters hauled in tankers from the mine to battle the blaze. But the water inside them was frozen. Ultimately, says Turbiville, “They parked the trucks next to the fire to thaw the water.” Despite these valiant efforts, the Syndicate Building burned to the ground, along with several downtown businesses.

That was the catalyst for change. The next year, a coalition called Deadwood, You Bet pitched limited-stakes gaming as a way to fund historic preservation and infrastructure improvements. It seemed like a good fit—after all, Deadwood, known during the Gold Rush for its card sharps and claim jumpers, once hosted the most famous poker game of all time. In 1876, legendary gunfighter Wild Bill Hickok was playing in a local saloon when a rival shot him in the back. Hickok is said to have died holding his cards; ever since, Aces and Eights have been known as the “Dead Man’s Hand.”

In 1988, South Dakotans rolled the dice, approving a constitutional amendment to bring back gaming. In the first eight months of operations, the town’s casinos generated $145 million in bets. Mike Rodman, executive director of the Deadwood Gaming Association, says the industry “absolutely saved the community. By conservative estimate, it brought in another 1 million tourists and expanded the shoulder seasons. It really had a tremendous impact.” Reflecting back on the early days, casino owner Mary Larson, who runs Deadwood Dick’s, told the New York Times, “If you had a pulse, you could have a job. Every building in town developed into a casino.”

Not surprisingly, Deadwood’s success spurred competition. In little more than a year, Iowa, Colorado, Illinois and Mississippi got in the game, with Missouri soon to follow. The Indian Gaming Regulatory Act, established in 1988, brought a host of new tribal casinos on the scene; there are now nine Indian gaming halls in the Mount Rushmore State.

“These days, every place but Hawaii and Utah has some type of gambling,” says Turbiville. “We’ve had to work harder and smarter in order to keep the people coming.”

All the while, out-of-state competition kept growing.

Early on, in Missouri and other Midwestern states, legislators had promised casinos would be “as un-Vegas-like as possible, more Mark Twain than Bugsy Siegel,” according to a report in the St. Louis Post-Dispatch. But the original riverboats eventually gave way to bigger, flashier gaming halls, like the Grand Falls in Larchwood, Iowa, which opened in 2011, and the Hard Rock in Sioux City, which opened in 2014. Deadwood can’t really compete in the bigger-is-better department. In 1961, the entire town was designated a National Historic Landmark, and any renovations must be in keeping with the Gold Rush theme. Accordingly, the city’s 30-odd casinos have names like Mustang Sally’s, the Wooden Nickel, Silverado, Tin Lizzie and the Mineral Palace.

Despite its struggles, particularly in the post-recession years, Deadwood wasn’t out of aces. In 2013, voters gave thumbs-up to Amendment Q, which legalized craps, roulette and keno in the town. The games were introduced last July to serve what Rodman calls a “rubber-tire market,” drive-in customers not only from the Dakotas and bordering states (Wyoming, Montana, Nebraska, Minnesota, Iowa) but from as far away as Colorado, Wisconsin and Indiana.

“We had been pretty slack, trying to climb out of the recession, hoping to maybe get back to that 2008 level,” says Rodman. “It was a real struggle for us and for the industry nationally. With people so much more exposed (to casinos) these days, you have to have a gaming product that can compete on a national scale.”

How are the new games faring? So far, so good, says Lee Harstad, executive director of the Deadwood Chamber of Commerce. “The handle from table games in November 2015 was down 8 percent, but year-to-date over 2014 shows the handle up 3.3 percent for slots and up 7.57 percent for table games.”

“It was surprising to see the number of players from the area that knew and played craps and roulette in other gaming destinations,” says David Schneiter, general manager at Cadillac Jack’s. “Guests from out of state used to ask for these games; now we can offer them. With the increased interest, we’ve seen a boost in overall play in all areas.”

The games have also attracted a new breed of customer, Schneiter says. “Younger players look for the social gaming experience that’s offered with table games. Craps is one of the more active, exciting and social games on the floor; it’s established a following of new and seasoned players. We promote the best odds available in Deadwood on craps, and use social media to reach the younger demographic. Roulette also has drawn a younger player.”

Cadillac Jack’s adds a little Vegas-style dazzle, Schneiter adds, with live aerialist performances in the table games area every Friday and Saturday night. “It has the feel of a party atmosphere,” he says.

Regardless of the industry’s ups and downs, and in spite of detractors who regularly predict the downfall of gaming in Deadwood, Turbiville has a positive story to tell. “As far as distribution of net proceeds, we pay for the entire cost of the gaming commission ($1 million). The local county gets about $800,000, and other municipalities around Deadwood get just short of $300,000. The school district gets $284,000. It varies, but that’s for fiscal year 2015, which ended June 30.

“We also pay for roughly one-third of the entire state’s tourism budget of $3.2 million, and send another $2 million to the general fund.” In addition, Turbiville says, the Deadwood school district receives no state aid, “because our local property taxes provide enough money to maintain our schools.” This year, he adds, local sales tax revenues are up an impressive 11.7 percent. The industry has created thousands of jobs.

“If not for the casinos, the city’s financial troubles would only have gotten worse in 2002, when the Homestake Mine closed,” says Turbiville. “In the end, it’s really been a lifesaver.”

Deadwood Then and Now
Madams, Muleskinners and Gamblers: A Q&A with Lee Harstad, Executive Director, Deadwood Chamber of Commerce

GGB: Please share a brief history of Deadwood before gaming.

Harstad: Deadwood came to be in 1876 with the finding of gold in the Black Hills of South Dakota. Shortly after the first find, droves of gold-seekers—and those seeking to profit from those with gold, such as the madams, muleskinners and gamblers—arrived in town.

Gold was No. 1 in Deadwood, and continued to be a driving force of the local economy. Homestake Gold Corp. was one of the top gold-producing mines in the country, employed hundreds of people, and continued to mine heavily for gold until falling gold prices in the late 20th century made it unprofitable.

Deadwood’s remaining businesses made it year to year with visitor traffic mainly. The last remaining brothels remained open until 1980, and their closure resulted in less traffic.

Was gaming a hard sell at first?

The 1987 fire that destroyed a downtown city block added to the bleakness, but it also began the momentum to increase the city coffers and make improvements. In the late 1980s, a group of Deadwood residents joined together to form the Deadwood, You Bet committee to gather support for limited-stakes gaming, with proceeds going toward restoration of the city’s history.

The eight members worked tirelessly, traveling statewide to gain support for returning gaming to Deadwood. From county fairs to speaking with voters, this dedicated crew put the time in to make sure the job got done. In 1989, they succeeded, and November 1 of that year, the first coins dropped in the city’s slot machines.

Gaming establishments can now be found nearly everywhere, so gaming isn’t quite the novelty it once was. However, Deadwood continues to be successful because of its history and the other attractions the area has to offer—and because flexible business owners now offer more than just gaming.

Have the new table games moved the needle in terms of additional revenues?

The past couple of years have been flat with slight increases, and the introduction of the three new games did provide a shot in the arm starting in July 2015. Not only did the games themselves help, but they also rekindled a memory that perhaps was lost when it came to gambling in Deadwood. Potential visitors no longer need to travel to a place like Deadwood to gamble, so coming here may have become an afterthought. The new games and the fanfare surrounding them likely spurred visits from some who hadn’t crossed Deadwood city limits for a few years—even if they weren’t looking to throw the dice or bet it all on red.

The regulatory agency that oversees gaming in Deadwood is one of the smallest in the nation. With a budget of around $1 million a year, funded via an 8 percent tax and a fee placed on every gaming device, the South Dakota Commission on Gaming is led by Larry Eliason, the executive secretary, who has been the chief regulator for two decades. He is assisted by Deadwood native Craig Sparrow, who heads up operations and enforcement.

Eliason says the year gaming was legalized in Deadwood, the Indian Gaming Regulatory Act was also passed, which allowed tribes in South Dakota to open casinos. Eight of the nine tribes in South Dakota now have casinos. In addition, bars and restaurants are permitted to have a certain number of VLTs throughout the state. The commission only regulates gaming in Deadwood, however.

Currently, there are 14 casino properties in the town. Some of them are small “Mom-and-Pop” operations, but others are substantial casinos with several hundred slot machines and some table games. They are largely concentrated on Main Street, but several larger properties, like the Lodge at Deadwood, have been built on the fringes of the town.

The size of the market dictates the level of scrutiny that is placed on the industry. All owners and senior managers must be licensed and are investigated fairly intensely, but lower-level employees get what is equivalent to a work card in Nevada, Eliason notes.

For testing slot machines and technology, Sparrow says they use independent slot labs.

“We were actually GLI’s second customer,” he says. “They also assist us in crafting some of our regulations, particularly with the table-game regs we just promulgated.”

A smoking ban was put in place six years ago. No exemption was given to the gaming or the bar industry, but the commission has no role in enforcement of this regulation. (“Thank goodness,” says Sparrow.)

The introduction of new tables and games—craps, roulette and keno—hasn’t made much of an impact on Deadwood. The impact on the commission was three new regulatory chapters covering each game, as well as some changes in the regulations surrounding security and surveillance.

“If they allow more than a $500 wager, we require the greater surveillance coverage on those games,” says Eliason. The maximum bet permitted in Deadwood is $1,000.