Can gaming bridge the esports gap and harness the revenue opportunity? 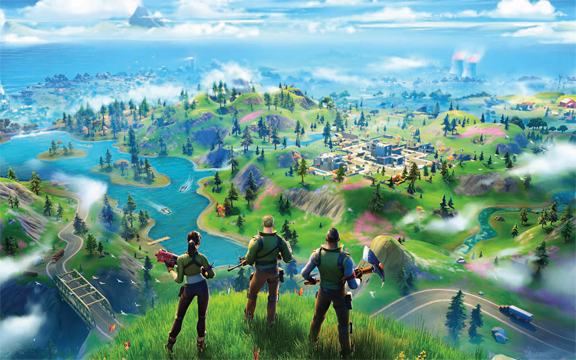 Esports has grabbed the attention of more than just the gaming industry, and for good reason.

The industry’s rapid rise has benefited from numerous omnichannel platforms that allow for unprecedented viewership and engagement from a diverse audience. With the “new abnormal” defined by Covid-19, esports has proven that media consumption is not just about what people can watch on the major networks. Instead, people are turning to streaming platforms like Twitch and YouTube for competitive-based content.

Today, more than 1.5 billion people are aware of esports, while approximately 500 million people make up its audience. By 2023, this figure is expected to grow to more than 650 million. In terms of viewership, major esports events are gaining ground against professional sporting events produced by the NBA, NHL, Formula 1, NASCAR and NFL. Starting in March, esports gained the attention of these leagues (which were largely shut down for months) and numerous others as it consistently gained new followers and partnerships despite the pandemic.

Esports encompasses organized video game-based competitions. Players can compete via several platforms, but the PC remains the preferred choice of hardcore gamers. PCs utilized by these players rely on multiple processors and robust graphic capabilities. Hardware companies like Alienware and D-Wave continue to focus on this area of investment to provide these players with high-level products.

Alternatively, consoles such as Sony’s PlayStation products, Microsoft’s Xbox, and Nintendo’s products offer simple, yet advanced platforms for gaming. These consoles are inclusive of almost everything needed for advanced gaming, including items and add-ons such as virtual reality headsets and haptic controllers.

Players also can participate via mobile gaming applications including those offered by Google and Apple. While this is the fastest-growing segment for the casual gamer base, it’s still limited in terms of screen real estate, processing power and controls. Regardless, it provides one-device access to entertainment on the go and has proven to be popular for certain games such as “Call of Duty: Mobile” and “Mobile Legends.” With streaming applications like AirPlay and SmartCast, players are also given the ability to play and consume content via their phone and TV. This has further enhanced the gaming experience and engaged the player base.

People of all backgrounds enjoy having on-demand access to watch professional gamers compete. This audience is wide-ranging and includes casual fans, enthusiasts and professionals. Video streaming, which continues to grow in popularity and is the main way enthusiasts view their favorite games and events, is provided by two primary sources: Twitch and YouTube.

Platforms such as Twitch (Amazon) have as many as 1.4 million daily active viewers. According to TwitchTracker, more than 650 billion minutes of content was streamed in 2019, with more than 55,000 live streaming channels available to viewers at any time. This included an average of 13,000 games streamed weekly. So far in 2020, more than 590 billion minutes of content has been streamed, representing 54 percent growth over this time last year. 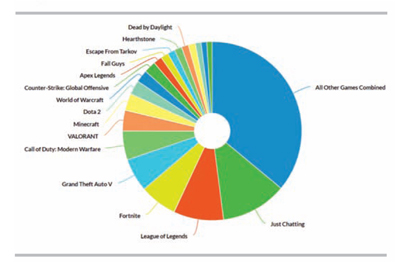 A sporting opportunity like this hasn’t presented itself to the world in quite some time, and this time it’s not limited to a specific game. Instead, esports covers multiple games and genres that rely on diverse skill sets, allowing the industry to continuously evolve and grow. Esports genres include multi-player online battle arena, first-person shooter, card game battle, role-playing, battle royale, real-time strategy, turn-based strategy and sports. Today, “League of Legends,” “Just Chatting,” “Fortnite,” “Grand Theft Auto V” and “Call of Duty: Modern Warfare” are some of the biggest game titles in esports in terms of viewership, but these names continuously shift as new games are developed and existing games adapt.

As more leagues become established, more opportunities arise for sponsorships and live event hosting. Additionally, these leagues continuously add to a new era of celebrity athletes that include names like Faker (League of Legends), Rookie (League of Legends) Xyp9x (CSGO), MatumbaMan (DOTA 2) and Gesture (Overwatch), all of whom are bringing in impressive earnings, are represented by agents, and have mass followings and enormous influencing power.

Additionally, esports has begun to offer amateur-level opportunities to players, including scholarships to colleges and universities. Ohio State was one of the latest Power 5 conference schools to embrace esports by creating a program comprised of a number of initiatives across academics, research and student engagement, including the operation of a select number of esports teams that compete against other universities.

Additionally, until it was postponed, Intel was planning to host the Intel World Open (sanctioned by the International Olympic Committee) ahead of the Olympic Games in Tokyo. We may soon see an NBA-style bubble created for esports athletes, allowing for arena events to occur again. Regardless, these competitors are able to play remotely, and fans are accustomed to viewing these events remotely as well.

Stakeholders in the esports industry garner a massive amount of revenue through multiple avenues. So far, various industries have realized the potential value of this massive audience. Branding, advertising, marketing and sponsorships have largely benefited from this growing audience and have yielded spectacular results. Most pundits agree that the increase in viewership and engagement is in its infancy, and that the market is a long way away from saturation. The following graphic produced by Newzoo illustrates the rapid audience growth the market is expected to experience through 2023. 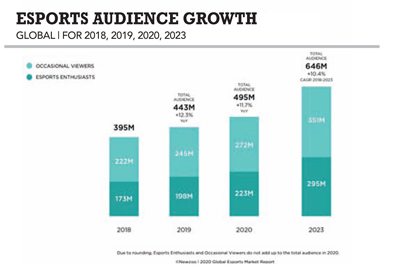 The esports market is well established in North America, China, Japan and throughout Europe. According to Newzoo, as a result of its prevalence in these major markets, global esports revenue reached nearly $1.1 billion in 2019 and is expected to reach upwards of $1.5 billion in 2020 and nearly $2.6 billion in 2023. It’s estimated that approximately 40 percent of this revenue was driven by North American patrons alone, with most of that revenue generated through sponsorships. 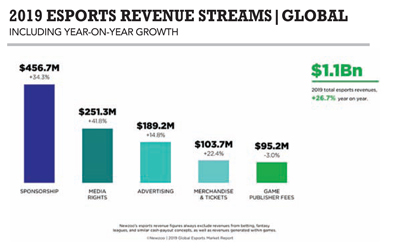 As a result, there’s been no shortage of partnerships and acquisitions in the space so far, with Tencent (the world’s largest video game company) detailing a $15 billion esports-centric investment plan for the next five years. The following graphic displays the diversity of the revenue streams associated with esports. In 2019, Newzoo estimated that the industry grew by 26.7 percent year over year, with the largest portions of revenue stemming from sponsorship and media rights (which saw 34.3 percent and 41.8 percent year-over-year growth, respectively).

Esports presents the largest new wagering opportunity for the gaming industry, with a wide variety of new bets that can be offered for the numerous leagues, games and events. Wagering on esports is the same as it is for any other sport. Data feeds from multiple suppliers provide fixed odds-style money lines or betting on the spread. Wagers can be placed on the same types of bets, including win, lose, or tie, over/under, propositions, parlays and in-game wagering options. Algorithms and artificial intelligence can play a large role in the bookmaking back office, with an appropriate amount of human oversight, providing operators with an opportunity to reduce risk and improve their revenue.

Additionally, the parimutuel avenue (or the rake model) is a good alternative option for wagering. Regardless, liquidity will be required to succeed in esports wagering, much like with poker or horse racing. Game titles that focus on sports, such as “Madden,” “NBA 2K” and “NHL,” as well as first-person shooter/battle royale games like “Call of Duty,” “CSGO,” “Apex Legends” and “Fortnite” are somewhat easier to book and have mass appeal.

The wagering opportunities for some of these big titles and others, including “DOTA” and “League of Legends,” is immense. Currently, there are Twitch integrations directly on in-game betting sites in regulated jurisdictions around the world, offering the convenience of viewing and betting on the same screen, which has improved the overall in-game wagering experience.

As the global market continues to evolve, certain jurisdictions, particularly in Europe, have begun to figure out how to regulate and monetize the market from both an event and wagering perspective. There was a slow acceptance of esports wagering globally prior to Covid-19, but now it seems to be gaining, or at least maintaining well, in all areas of the online sector.

The lull was largely due to illegal underground betting and peer-to-peer wagering that occurs worldwide, as well as issues regarding the integrity of games and players, as is experienced with most sports. There are a number of issues that must be combated with proper regulation for the full wagering opportunity to be realized, including publisher cooperation (as they create and usually own the game content).

Responsible gaming and other addiction issues are a concern for publishers, operators, regulators and other interested parties. They should be aware of their consumers’ habits, offer protections and monitor for irregular patterns when designing or allowing wagering on their content.

In the U.S., regulations surrounding esports wagering are being put into place, with select markets now allowing legal esports betting. This regulatory process has accelerated during Covid-19. But this initially started in states like Nevada during the 2017 legislative session, when “Other Events” were added to the regulatory makeup in the state. This bill was sponsored by then State Senator Becky Harris, who later became the first chairwoman of the Nevada Gaming Control Board. It’s since been adopted by other states including New Jersey, Indiana and Colorado. Globally, legal esports wagers are accepted in numerous jurisdictions.

From a wagering perspective, for this market to grow at an exponential rate (as has been experienced with traditional sports leagues), all stakeholders need to come together to establish a broader sense of oversight, overarching regulations and internal controls which is a common theme among existing gaming regulators.

Money is growing and flowing in many different areas of the market. It offers exciting new options for entertainment. The statistics clearly show the rapid growth of the market, the big names that are involved and the high probability of continued growth for the future. Within the coming years, it will be vital for large brands to find ways to tap into this lucrative market and become a part of the entertainment experience that this large pool of consumers enjoys.

For the gaming industry, there are options to get involved in the market through the sponsorship of teams and tournaments, buying a team partner with influencers in the industry to have them promote brands and review products, investing in data and artificial intelligence or finding ways to capitalize on the growing wagering opportunity.

Regardless of the opportunity pursued, it’s time for the gaming industry to take advantage of this multibillion-dollar wave of opportunity.