A convergence of industry changes, including Covid-19, have turned ETG stadiums into a growing phenomenon. 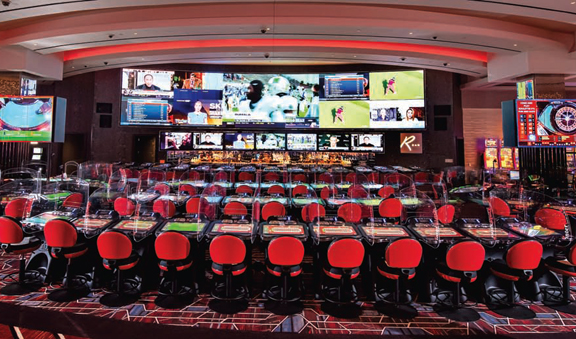 The new Live! Casino in Philadelphia features an increasingly popular type of gaming venue: electronic table games (ETGs) in a stadium setting. This setup at the R Bar (l.) is on steroids: a total of 74 ETGs or “dealer-assist” Interblock games, including 17 at the bar and the rest in a semicircle with big animated screens, plush seating and a built-in party atmosphere.

Clearly, there’s no waiting. Dozens of people can play at a given time, and just a handful of live dealers call the action for everyone.

Therein lies part of the appeal of the ETG stadium, both for guests and operators, says Mike Cray, vice president of property operations for the Cordish Companies’ Live! casinos.

“First of all, the setup is absolutely gorgeous, with the TVs and screens, and this is a lower-limit kind of table game, which makes it attractive for anyone to come in there.” Some casinos have opted to raise their yield on table games and minimum bets in the $25 range, which won’t fly with price-conscious players. “I keep the Interblock terminals at a much lower limit,” says Cray, “and it creates a lot of buzz.”

But that’s not all. Operators can fit far more ETG terminals on the floor than tables, and fewer dealers mean lower costs and fewer concerns about labor shortages.

“I can pretty much run the whole setup, 74 units, with only four dealers, so we’re probably talking 20 FTEs (full-time equivalent),” says Cray. “This stadium-type gaming is going to become more popular just because of the efficiencies of what you can offer and the money you can save on labor.”

Electronic versions of table games originated in Europe in the 1990s, then migrated to Asia and the U.S., finding homes in smaller casinos that wanted to maximize the value of their table segment, as well as markets that didn’t yet offer traditional tables. In 2015, industry leader and ETG pioneer Interblock released a study saying enthusiasts of the games “play more often and longer, have larger gaming budgets, are likely to spend more, and are more likely to play games across the entire operation.”

In the U.S., says Interblock CEO John Connelly, ETGs reached a new level of popularity right before the viral outbreak.

“It didn’t happen overnight; it was an evolutionary process over the past 48 to 60 months, but really hit a turning point in the back half of 2019. Globally, our company began to see some of the highest growth trends we’d experienced in 25-plus years on that particular area of the floor.”

That momentum was interrupted by Covid-19, and the ETG segment “suffered like all other products and segments of the floor,” says Connelly. The company hustled to change up its hardware to allow for more flexibility on the floor—a good move, he says. “We saw a tremendous surge in ETGs due to the ability to do social distancing and provide a safe environment for players and dealers.”

Even as casinos reopened, many table games remained off-limits. And in some ways, the crisis kicked off a groundswell of new interest in ETGs. “It forced a lot of traditional table game players to try an electronic form of their favorite game; that really catapulted the segment to a growth rate and acceptance level that was far greater than pre-Covid,” says Connelly.

And today, he adds, that momentum has only increased. “Quite frankly, with the reopening of casinos and live tables, many of us expected a slight slowdown in the revenue per day on those table games, but actually, it’s been the opposite.” He says the performance of the products in the U.S. continues to trend up month over month, despite the fact that many live tables have completely reopened.

“We’re still in the early days, but it seems Covid created a new category of player and expanded the existing category of players to a level we weren’t anticipating,” Connelly says. “The capacity to help operators adhere to social distancing protocols, reduce labor costs and lesson dependency on cash and chip handling instantly elevated their relevance.

“The segment was on a growth trajectory before Covid-19, and the pandemic amplified the trend. It was the catalyst that really exploded the understanding of this segment of the floor.” 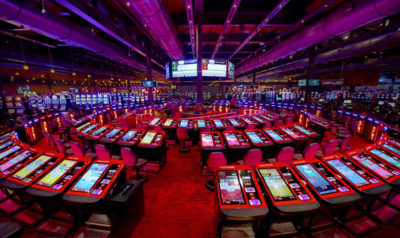 Paul Baskerville, director of product management for gaming technology provider IGT, has witnessed the same phenomenon. “This upward trajectory started before the pandemic, but the events of the last year certainly accelerated the momentum,” he says.

In addition to flexible seating, stadiums let operators offer table game content from nearly any location on a gaming floor, and the games are easier to clean.

“Operators and players also appreciate the rate of play that ETGs offer. ETG players can enjoy multiple games at once, not having to wait for the dealer as they would in a live setting. This increases the rate of play and reduces the per-hand labor costs.”

In 2018, when IGT installed ETGs at Resorts Casino in Atlantic City, it stated that when a live dealer works in conjunction with ETGs, one dealer can deal 150 hands an hour to multiple players, for up to 1,800 bets an hour, or more than seven times the bets taken by one dealer at a physical baccarat table.

Baskerville says the stadium setup appeals to players across demographics of generation, gender and skill level. “In cases where a casino promotes an ETG stadium like a ‘party pit’ or something similar and creates an atmosphere that may be appealing to younger demographics, then yes, I think we can expect a potentially younger demographic to be attracted to that space. As I visit customers across the U.S., I typically observe a wide range of players, novice to experienced, across all demographics.”

He adds that a stadium configuration creates “a destination on a casino floor… defining a space with a signature look and feel and creating a point of interest for casino patrons.”

Importantly, he adds, ETG terminals enable casinos to offer a variety of games on a single unit. “In my experiences, players are readily intrigued by ‘new.’ We’re seeing players gravitate toward ETGs due to their novelty and multi-game offerings. I don’t view the growth in the ETG segment a by-product in any reduced interest in slots, but as a way to drive growth and add innovation, choice and convenience to a casino floor.”

How have customer preferences developed as far as RNG-based products versus live-dealer products?

“We’ve found preferences for RNG versus live-dealer products to be based on geography and the casino’s core clientele,” says Baskerville. “In general, at more resort-casino properties players tend to gravitate more towards live-dealer ETGs, given that they’re more like traditional table games. At more regional, locals-based casinos, the trend is often more toward RNG-based products.”

Bottom line, he says, “Our customers have more ETGs on their gaming floors today than they did a year ago. They’ve evolved into a cornerstone of the modern-day casino environment and are an essential element, just as video poker, slots and many other casino mainstays.”

The same dynamic continues in Asia, where the segment was already popular with up to 20 percent of floor space reserved for ETGs. Observers say electronic games are increasingly the preferred choice of patrons who don’t want to wait for a seat at the table or sit shoulder-to- shoulder with other players. Weike Gaming Technology Sales Manager Andrew Lim recently told GGRAsia that he’d seen heightened interest in ETGs in Macau, Singapore and Vietnam, and the stadium setup also has proven practical.

“We foresee this trend may continue during and even beyond this pandemic, as players get more used to playing on the ETGs, and operators also see the many advantages associated with ETGs despite higher initial setup cost,” he said.

Interblock President for Asia Pacific Michael Hu told the news outlet operators are looking for “creative ways to adapt existing technologies for new uses, such as integrating ETG stadiums with live table games” in a hybrid he refers to as “community games” featuring baccarat, blackjack, roulette and sic bo.

Help Me If You Can 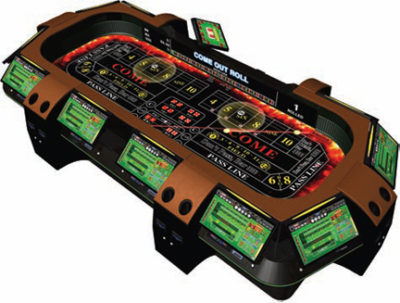 Moreover, the dynamics of the game are drawing slot players too, says Cordish’s Cray. “You have to remember when slot players play video poker, they have roulette and blackjack in those terminals, and a lot of them are going over to the Interblock stadium, too. Of course, existing table game players enjoy ETGs especially when live table games are a little bit higher on the minimum side. You can get the same outcome at a lower price.”

Laura Sims, product manager for game developer and manufacturer Aruze Gaming, points out other advantages of dealer-assisted ETGs, in and out of the stadium setting. “Players like the trust factor: there’s a person involved. They can see physical cards and see the dealer, and that interaction is something they value. And for some players, the barrier to entry isn’t as intense as in a traditional table game.”

With each player at his or her own terminal, there’s “a level of separation, where they can place their bets somewhat in private; that removes some of the etiquette questions that new players particularly can find intimidating about table games,” says Sims.

Features like EZ Help on Aruze’s Roll to Win electronic craps games make the learning curve even easier. “Once it’s turned on, you can press any location on the screen and it will tell you everything you need to know about placing bets—what are the odds, what’s the pace of the game, how you get paid,” says Sims. “It’s on the main game-play field, not buried in help screens. It makes it so much easier to not just play the game but to learn it, love it and basically become a lifelong player, which is what we, of course, were hoping for.”

Fred Nunez, director of product management for Aruze, likens the stadium setup to a sportsbook, “where you can go in and place your bets and kind of watch what’s happening on other screens. It gives you that variety and you’re still around people. You still have the trust factor of the live aspect. I think that’s what is shepherding the growth of stadium seating in the U.S.”

Connelly says the segment has room to expand. “Considering that less than 1 percent of the North America casino floor is currently ETGs, I believe there’s a long way to go.”