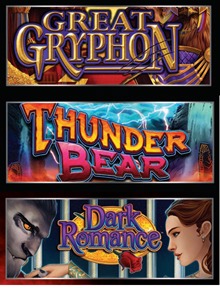 Last year, Georgia-based slot supplier Cadillac Jack staged its first G2E exhibit as part of Canada’s Amaya Gaming Group, which acquired the company late in 2012. The company, traditionally a successful Class II supplier with strong markets in Alabama, California, Oklahoma and Mexico, has been making inroads into Class III markets, while vastly improving the number of channels for its content, thanks to the online, social and mobile networks of its new parent company.

Last year, Cadillac Jack impressed operators with the innovative “PowerXStream” series of slots, with games like “Legend of the White Buffalo” and “Fire Wolf.” The series has been a high-earning hit for operators in all of the company’s markets.

This year, the company is expanding the game library of the PowerXStream series with several new games taking advantage of a variety of innovative play mechanics.

Games in the series feature several different unique reel configurations, including varying symbol sets—referring to number of symbols per reel, the games include 3-4-4-4-3, 4-4-3-4-4, 4-4-4-4-4; and 3-3-4-4-4 configurations. They are all “ways-to-win” setups, nearly all with wins occurring for adjacent symbols paying both left-to-right starting with the first reel and right-to-left starting with the fifth reel. The primary reel setups result in 576 possible ways to win on every spin.

The series also employs five main mystery features, several being used as the central features for new game brands within the PowerXStream series:

With “Reflex Wilds,” a full stack of wild symbols on either the second or fourth reel “reflects” to the other reel, making both wild. “Power Blocks” are oversized symbols that are three reels wide and four rows deep. They may land partially or full on the screen, amounting to a stack of three, six, nine or 12 symbols.

“Streaming Stacks” are randomly chosen stacking symbols appearing at the beginning of a reel spin. “XStatic Wilds” are wild symbols that remain “static,” or locked in place. And “Turbo Boost” “boosts” the base game with mystery progressive awards.

At G2E, Cadillac Jack will launch new PowerXStream games in these and other feature “families,” according to Eric Boese, vice president of game development and chief game designer for Cadillac Jack. “Last year, we showed a handful of games on PowerXStream, and over the last year, that handful of games has been very popular and successful,” Boese says. “They are at 90 percent of our properties, and at all of those properties, they are averaging more than 50 percent above house average. So, naturally, a focus of our show is to build on that PowerXStream family.”

Boese says PowerXStream has opened new doors for Cadillac Jack in both Class II and Class III markets, crediting the series for strides in California and Oklahoma in particular. “In California, these games have really opened doors for us,” he says, noting that the game series launch coincided with the awarding of the company’s new Class III license in the state. “For mixed floors using both Class II and Class III, they’re buying the same PowerXStream game from us in both configurations.”

New PowerXStream games being launched at G2E in the Power Blocks feature brand include “Great Griffin,” “Dark Romance” and “Release the Kraken.” Boese notes that while other manufacturers have utilized floating blocks of stacked symbols, this series is the first to do it utilizing the 3-4-4-4-3 reel setup rather than a payline setup. “That mechanic, coupled with these big blocks, form highly compelling math models for a gambler-driven market,” Boese says.

The game “Monarch Moon” introduces the Power Sync brand of games—also 576 ways to win—which uses a longer floating block of symbols than Power Blocks in a free-spin game, creating more anticipation for stacked wins as the reels spin.

For the XStatic Wilds brand of PowerXStream, launch games include “Monarch Sun” and “Thunder Bear.” In this game series, the unique 4-4-3-4-4 reel setup is used, which returns 720 ways to win for each spin. In the free spins, those “static” wilds quickly fill up the three-symbol middle reel, which opens the doors to a high volume of wins. The right-to-left/left-to-right pays add to the frequency of big wins in the volatile program.

One more family of PowerXStream games being launched at G2E is called “Symbol Surge.” On a 3-3-4-4-4 reel layout, it’s the only PowerXStream launch game to pay wins only left to right. However, the central feature makes up for that, with wild symbols “surging” in a burst outward in multiple directions to create large sections of wild symbols.

The PowerXStream series accompanies premium games in several different configurations, including those in the popular Stratos cabinet launched last year.

Cadillac Jack will display three game cabinets at G2E, which the company says are all engineered to increase game play through dynamic lighting, tightly integrated software and immersive sound.

Heading up the new cabinets is Genesis Halo. Building on the popularity of Cadillac Jack’s original Genesis Chrome cabinet, the Genesis Halo integrates a sophisticated game-controlled lighting package to the base Genesis cabinet. Genesis Halo is loaded with features that enhance player experience, including brilliant effects and attract modes which draw players to the game while the game-driven lighting keeps the player engaged.

There also is a new Stratus cabinet, with a new façade and light setup that Boese says will make it more competitive in the premium space. The company is launching the cabinet with two new game families. “Turbo Reels” is a new family of games in which the player climbs a progressive ladder bonus during a free-spin event that guarantees one of the progressives. When reels land on arrows, the player moves up the ladder.

In “Winferno,” the XStatic Wilds feature is combined with a multi-level progressive feature, which can be configured as a wide-area prize. The series features dynamic animation, including flame effects, and the towering Winferno Boost progressive. Available as a linked progressive or stand-alone, Winferno bundles the unique PowerXStream pay mechanic with random progressives in a volcano-themed experience.

Finally, Cadillac Jack will launch a new progressive series called “Turbo Boost” at the show. The Turbo Boost feature is a two-level, three-level of four-level mystery progressive, with all progressives containing a “Must Hit By” jackpot trigger. A proprietary system randomly increments the progressive at an accelerated rate as it approaches the “Must Hit By” level—boosting at increments of $1 or higher if the casino chooses—accompanied, of course, by all the bells and whistles to let players know the progressive is approaching.

That feature also means this progressive system awards the jackpots faster than any other “Must Hit By” system out there, Boese says.

This year’s show will be an important showcase for the company as it moves into new markets. Boese says the company’s California market is one that is ripe for expansion.

“For the most part, our games are core gambler-driven games,” he says, “and we feel California is a gambler’s market.” He adds that the company is a year or two away from entering the Nevada market, where the gambler will be a little different. “As that time draws closer, we’ll start designing more of those time-on-device style games that Nevada players like,” he says.

The company will be growing into commercial markets in the Midwest and South at the same time. “It’s a really exciting time for us at Cadillac Jack,” says Boese. “We’re really excited about getting into all these new markets, learning the new players in these markets, and learning what those players want.”

Meanwhile, the company will continue to export its content to new channels via parent company Amaya. “With them having more of an online and mobile focus, it’s been great for us, because we’re getting many of our best games porting over to online and mobile segments,” Boese says, adding that going forward, the company will be able to freely transfer content among the various channels.

But first things first—with more than 85 new games and new cabinets, this is Cadillac Jack’s biggest G2E collection to date. “It’s not just the biggest, but the best in terms of quality,” says Boese. “We’re excited.”