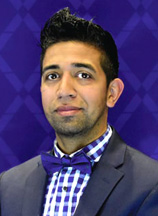 Given John Baca’s education, directing slot operations at a casino seems far-fetched. The San Diego native attended Embry Riddle Aeronautical University, where he majored in aviation business administration and minored in flight science and air traffic. He moved to Washington state with his wife, Amanda, and earned his B.S. in business administration at the City University of Seattle.

Nothing says slots yet.

Baca looked for gainful employment shortly after his relocation to Washington, and got a part-time position as a security officer at Tulalip Resort Casino. But he really wanted to work with slots, so he applied for a position as a slot technician. He learned the technology and got the job.

In 2012, a sales position opened up with Rocket Gaming Systems, north of Seattle. Again, Baca took the leap. He spent just over a year with Rocket before returning to Tulalip as a lead technician and then slot engineer.

At Rocket, Baca worked with a number of casino companies throughout the state, including Angel of the Winds Casino Resort in Arlington, near Seattle. “I could tell that the team at Angel of the Winds had a strong bond, a shared drive for results and a passion for their people and culture.”

He landed a job as slot tech manager at Angel in early 2016 and moved up to director of slot operations in late 2017. Baca credits his rise to hard work in what is a tight community in Washington.

“There were a lot of up-and-coming names being mentored by some of the early facilitators of gaming,” he recalls. “To separate myself, I made efforts to network, be a sponge for information, listen to other experiences and become comfortable with the latest applications and modules in the market.”

In particular, Baca singles out Jeff Wheatley, assistant general manager at Angel of the Winds. “He helped mold my environment to ensure that my success carries over to the department and brings a positive return. As a mentor, he takes the time to carry his group with him. Three years later, I’m still learning and glad to be on his team.”

While many tout sports betting, skill-based gaming and online gaming as the industry’s biggest changes, Baca says these are just small wins in expanding reach and creativity.

“Skill-based gaming will bring better promotional/bonusing opportunities, but gamblers are safer and better off with predetermined fixed returns. Sports betting represents a definite increase; however, slots and tables will continue to be the bread and butter.”

Baca is a sports and outdoor enthusiast who credits his home life—with Amanda, two kids and a German shepherd—for bringing calm and purpose to his life outside of work.

For those young people who might want to give the industry a try, Baca says take a lot of chances. “Find good mentors and work hard. Gaming is still one of the unique markets that value growth and experience from within, equal to any college degree. This approach builds longevity and creates the ability to grow. So network, listen, learn and contribute to the market in some way.”