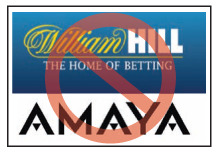 There will be no merger at present of bookmaker William Hill and PokerStars owner Amaya Gaming. Talks concluded last month between the boards of directors of William Hill and Amaya with a joint decision that the companies will no longer pursue a merger.

The possible deal came amid a flurry of consolidation in the iGaming sector over the past year, which saw Betfair and Paddy Power merge, Ladbrokes and Gala Coral finalizing their deal, and GVC Holdings buying Sportingbet in 2015, outbidding 888.

In fact, William Hill recently spurned a takeover bid from 888 and the Rank Group that was valued at ?3 billion. The market cap for William Hill is today ?2.15 billion and Amaya, whose stock is down 23 percent over the past year, is valued at ?3.4 billion. The Amaya board also said it had received interest from GVC Holdings as well as the William Hill talks.

Both companies have had troubles recently. William Hill has been without a chairman since James Henderson stepped down in July after questions about his digital strategy were raised. The company had previously tried to acquire both Rank and 888 but was unsuccessful in each case.

As for Amaya, it’s been downhill since the company purchased PokerStars and Full Tilt for almost $5 billion in 2014. Insider trading charges against then-CEO David Baazov were raised. Baazov stepped down from that position, and later resigned from the board, saying he was organizing a plan for a buyout that would take the company private. According to a Reuters report, that plan is no longer being considered. Baazov no longer plays any role in the company outside of his equity ownership.