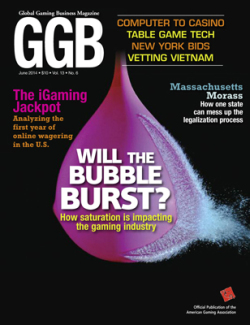 Once, the United States was an undeniably underserved casino gambling market. Back in the Jurassic era of gaming—the early 1970s—Nevada was the only place Americans could legally bet on casino games. When Atlantic City’s first casino, Resorts International, opened in May 1978, the results were predictable: lines around the block, as pent-up demand was suddenly met. Within five years, Atlantic City casinos were out-earning their counterparts on the Las Vegas Strip.

The next 20 years saw casino gambling expand throughout the United States. Back in the 1970s, some were fearful that the availability of gambling elsewhere would ruin the appeal of Las Vegas. That didn’t happen, as Las Vegas gaming win soared in the 1990s.

But since then, further expansion has put pressure on “mature” gaming markets like Atlantic City, Mississippi and Delaware, which have seen revenues decline. This raises the question of whether further expansion will do more harm than good.

To get a better appreciation of where we are heading, I compiled a set of data with total annual casino and racino gaming revenues for all 23 states, and slot data for Connecticut’s two tribal casinos.

The results? Since 2001, the Northeast has increased its overall share of the nation’s gaming win, rising from 24 percent to 30 percent. The South and Midwest have remained relatively constant, with some weakening in the South despite the addition of Florida racinos to the mix. And the West, thanks to Nevada, still is dominant, though the Northeast is catching up.

This region continues to be dominated by Nevada. With Kansas and Oklahoma as the only new commercial entrants to the region since 2001, there simply hasn’t been much competition for Nevada—among commercial casinos, at least.

Of course, the growth of tribal gaming in California, Arizona, Oregon, Washington and Idaho has had a great impact on casinos in Nevada. While the Strip has remained resilient, the new competition has undeniably hurt several markets in Nevada, particularly Reno, Lake Tahoe, Laughlin, and other areas chiefly reliant on drive-in traffic from previously underserved states.

It appears that Nevada has weathered the brunt of the damage caused by the expansion of tribal gaming; the recovery of Las Vegas has stabilized the rest of the state. Though it is not seeing the rapid expansion of gambling that the Northeast is, it is still the largest generator of commercial casino revenue.

There have been two stories in the Midwest: the decline of Illinois, once neck-and-neck with Indiana as the region’s largest casino market, and the debut of Ohio.

In 2001, Illinois had a 32 percent share of the Midwest, just behind Indiana’s 33 percent. A 2003 tax increase started the slide, and the 2008 smoking ban greatly exacerbated it. In 2013, Indiana had 31 percent of the Midwest market; Illinois’ share had fallen to less than 20 percent of the market.

On the other side of the equation, Ohio has not had as much of a disruptive effect as might have been thought. In 2013, the state’s fledgling casino industry generated over $1 billion in revenues. Since 2011, the last year before Ohio casinos, Michigan revenues have declined by a total $400 million—a hit, to be sure, but one that is more than canceled out by the $1 billion in revenue, much of which seems to be “new” money. Overall, since 2011, Midwest gaming revenues have increased by 11 percent—the best record of any quadrant since then.

That large increase speaks to the underlying strength of the Midwest region as a gaming market, and to the continued health of the national gaming industry.

The South—Mississippi, Louisiana, Missouri and Florida—has seen tremendous changes since 2001.

At the start of the period, Mississippi was the king of the region, taking home nearly half of all commercial casino revenue in the South. That share has dropped gradually since then, evidence of serious problems with Mississippi’s industry—problems exacerbated by the destruction Hurricane Katrina wrought on the Gulf Coast in 2005, but problems predating the storm. Mississippi’s gaming revenue has fallen 21 percent since 2001—the second-worst record of any state with commercial casinos.

But how much of this drop has been to new competition from other states? New competition of a sort came from Missouri, which in 2009 eliminated its $500 buy-in limit, and Florida racinos—along with full-service casinos operated by the Seminole Tribe in Florida—have likely lured Sunshine State gamblers.

At the same time, both Missouri and Louisiana have strengthened their positions. In 2011, Louisiana’s gaming win passed Mississippi. As late as 2009, Mississippi was the third-leading commercial casino revenue state in the nation (behind Nevada and New Jersey). By 2013, it had fallen to sixth place.

While commercial casinos across the South grew by 19 percent during the period, the story of Mississippi makes it clear that new expansion, while it has had an overall beneficial effect on the industry, has hurt some established markets that were particularly vulnerable to competition. 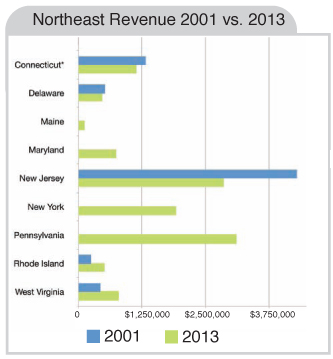 This region has seen the most upheaval. With the densest population, the Northeast is a valuable prize, which is why, despite several mature casino markets, expansion continues here.

There is one common denominator in this region: generally speaking, the more mature a market, the worse it has fared over the past decade. Atlantic City, New Jersey, entered the 21st century with close to two-thirds of the region’s gaming dollar; by 2013, that share had fallen to less than one-quarter.

Atlantic City had been struggling with new competition for much of the 1990s; the advent of tribal gaming in Connecticut forced several regulatory reforms, but the later opening of racetrack casinos in adjacent Delaware proved that nearby states were eager to recapture some of Atlantic City’s customers.

The turning point came in 2006, when Pennsylvania racinos began operation. Within six years, Pennsylvania had surpassed New Jersey to become the second-highest-grossing commercial casino state, behind only Nevada. Since 2001, New Jersey’s gaming win has fallen by more than 33 percent; Atlantic City, where the Atlantic Club casino closed in January, is the poster child for a market hit too hard by surrounding expansion.

Expansion has played out in New England, as well, where Maine and Rhode Island have chipped away at Connecticut’s tribal casinos, whose slot income has fallen by 14 percent since 2001. The real threat, however, has come from New York, where racinos began operation in 2004. In the past 10 years, commercial gaming in New York has become a nearly $2 billion-per-year business, to the detriment of both Connecticut and New Jersey.

But what has been the overall impact? Is new growth ruinous to everyone?

The answer is no. Since 2001, Delaware, New Jersey and Connecticut (slots only) have seen their gaming win shrink by a combined 27 percent—hardly a growth story. But the region as a whole has seen its gaming win increase by more than 70 percent in the same period. This is, by far, the best record of growth in the nation, nearly double the Midwest’s 41 percent.

Furthermore, though last year saw flat revenues for the region as a whole, since the recession the Northeast’s gaming market has grown by nearly 11 percent—again, the best record in the nation.

The Northeast’s track record over the previous decade suggests that legalization is creating new demand for casino gambling. While it is not sufficient growth to offset declines in jurisdictions that were primarily reliant on importing gamblers and which have not invested in new facilities on par with Las Vegas, that growth is undeniable, and the reason why expansion continues to be feasible.

We all know the narrative: thanks to massive investment during the 1990s, the Las Vegas Strip reinvented itself to appeal to a new generation of gamblers and, even as casinos sprouted across the country, its revenues rose to unprecedented levels.

That’s all true—revenues did rise. But how did they fare in the big picture?

In 1984, when Atlantic City was its only real competition, casino revenues on the Las Vegas Strip were 0.04 percent of the total U.S. gross domestic product. By 1995, that share had risen slightly to 0.05 percent. All of that new investment—which at the point included the Mirage, Excalibur, Treasure Island, Luxor, and MGM Grand—was paying off. The Strip was drawing a bigger share of U.S. wealth.

After the 1990s wave of expansion, the Strip still reigned supreme. In 2001, just under 17 percent of the total U.S. commercial casino gaming win came from the Strip. In 2006, that share peaked at over 18 percent. But even before the recession, as gaming proliferated again, that share began to fall—a fall exacerbated by the recession. By 2009, only about 15.5 percent of total U.S. commercial casino win came from the Strip.

The Strip lost ground in other ways, as well—its share of total GDP remained constant at 0.05 percent from the mid-1990s until the recession, when it fell once more to 0.04 percent.

But, since 2009, the Strip has regained ground relative to other casinos, even with new expansion; in 2013, at a shade under 17 percent, the Strip is responsible for the highest percentage of total U.S. gaming win since the 1990s.

Comparing overall U.S. GDP to total gaming revenue yields an interesting insight: before the recession, commercial gaming’s share of the U.S. economy crested at 0.29 percent. Since then, despite a recovery, gaming’s percentage of GDP has fallen steadily to 0.24 percent.

What does this shift mean? It suggests that the recession has changed U.S. consumer spending in ways that will continue to impact the casino industry. Simply put, it looks like domestic gamblers had more money—or a greater willingness to gamble the money they had—before the recession.

The decline of states like New Jersey is not a symptom of an underlying problem for the gaming industry, but the experience of Las Vegas is telling. Since the recession, Las Vegas has enjoyed record numbers of visitors, but the total gaming win—despite an infusion of cash from international high rollers—has not reached pre-recession highs.

The industry, then, while it has expanded, has become more competitive. While the market is growing, it is not growing—in relative terms, at least—at the same rate that it did during earlier expansions. There are no longer massive swaths of the country with no casinos. And, barring a sudden turn towards Puritanism, there is no reason to believe that the market will substantially contract. While some states will see revenues fall and then plateau, on the whole the casino industry looks to have reached a point where it can still grow modestly.

All of this leads back to the idea that, while there have been some left out in the cold, the expansion of gaming has been positive for the industry as a whole. In 2013, commercial casinos earned more money and were more dispersed than ever before, and incremental expansion in the near future seems to suggest that this pattern will continue.