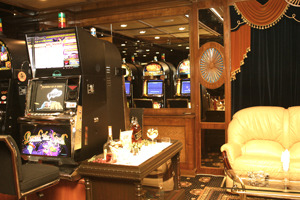 The development of casino industries within European countries generally has been a story of entrepreneurs leading the way and legislators following more or less closely behind. The result is that, over time, a well-regulated and healthy gaming industry emerges and becomes an important part of the economy, providing jobs for people and tax revenues for local, regional and national governments.

However, sometimes things go wrong. The regulations and taxes imposed by government agencies that do not “get it”-like Germany, for example-can be excessive to the point where the industry and therefore the benefits to the nation begin to suffer. At the other extreme, a government that becomes paralyzed by a mix of external pressure from the industry and self interest on the part of legislators and others in power can find itself failing to keep pace with development on the business side of the equation.

It appears some version of the latter might have happened in Ukraine. Either that or the authorities purposely have chosen to see what kind of a gaming industry real laissez-faire capitalism can produce.

The number of gaming operators in Ukraine was put at over 1,400 recently by official government data. Unofficial estimates put the total closer to 2,000 operators. Included in that number are casino businesses, but also sports betting operations and, of course, slot arcades. Lots of slot arcades. In fact, the number of gaming machines of all categories in operation in this country of 41 million people is estimated to be as high as 240,000.

Half of these devices are thought to be operating without a license and thus not providing any direct revenue to the government. Because of this and other factors, the Ukraine Accounting Chamber Board believes it is missing out annually on between 3 and 7 billion Ukrainian hryvnia, as the local currency is called. That comes to between $667 million and $1.6 billion not finding its way to the public coffers in the course of the year.

It is not as if there are no regulations in place. There are in fact official fees and taxes for the operation of casinos and gaming equipment. Under present regulations, for each casino that offers table games, an operator pays €150,000 for a license that is valid for five years. For casinos that only offer slots, an operator pays a single license fee of €150,000 that covers all such properties owned by the company. In addition to the license fee, there is a monthly per-device charge per gaming apparatus. For each roulette table, the cost is about $3,500 a month, each card table about $265 and each slot machine about $75. There also is an income tax on company profits.

The problem for the treasury is one of implementation. Industry sources suggest that it is only in the capital city of Kiev that the business is well-regulated, and that elsewhere in the country those “authorities” overseeing the gaming industry might be somewhat less than official, or official-minded.

According to a report from the Accounting Chamber released in May, this loose state of affairs seems to have been brought on by the government itself. Inaction on legislative proposals plus confusion regarding which department controls what appear to have created a vacuum, into which the usual suspects have been free to step.

The auditors pointed to several problems, including the fact that all regulations relating to gaming have not been brought into one body of work, but instead are still spread among many unrelated documents-which in turn are scattered among various regional and national authorities. Additionally, no concrete steps have been taken to establish a system for the exchange of information among the various agencies.

The result has been no coordination in the distribution or oversight of gaming licenses, no centralized collection of operators’ financial results and no formula for the allotting of collected fees and tax revenues to governmental needs.

The Accounting Chamber auditors place the blame for all this at the foot of three organs of government. They say the Cabinet of Ministers and the Ministry of Finance failed to act on the conclusions and proposals produced by a previous audit of the gaming industry, and that the nation’s lawmakers in the Verkhovna Rada, the single-chamber legislature, rejected the one bill on gaming presented them by the government and have not considered any other bill submitted by representatives of the people.

The audit, which was conducted in 2007 and the first quarter of 2008, uncovered “numerous cases” where the Ministry of Finance violated the existing legislation and regulatory acts during the performance of its supervisory role over gaming licenses. The report called the efforts by Finance “small-scale and ineffective.” Ironically perhaps, the audits covered only 0.4 percent of gaming licenses.

The collection of annual fees assessed for individual gaming devices, a function performed by the State Tax Administration, was also found to be sub-par. The reason cited was the lack of coordination with the licensing information in the hands of the Ministry of Finance. The situation is that about 2,000 operators are doing business merely by paying their machine and table fees but without possessing an official gaming license.

For its part, the Accounting Chamber Board informed the relevant governmental bodies of its findings and made recommendations for change in an effort to bring about a more efficient regulation of the gaming industry-and a more profitable return for the treasury.

The board must have struck a nerve. By June the Ministry of Finance had come forward with a bill that addressed some if not all of the audit’s findings. Some of the suggested measures even hint at a movement toward a consolidation of the industry.

The main feature of the bill is the establishment of minimum capital requirements for new gaming operators. Casinos and slot arcade operators would need to have the equivalent of €1 million to set up shop. Sports betting offices would require €200,000 and eventual online operators €500,000. The bill suggests that the cabinet be allowed to set license fees.

Another signpost of approaching consolidation is a measure that would set a minimum number of slot machines per location. The number mentioned is 40 slots per casino, which would be a serious hurdle for most of the smaller operators.

Notably absent from descriptions of the bill is any talk of the establishment of a dedicated gaming board, which unfortunately seems to point to a continuation of the status quo in the area of accountability and oversight.

Nevertheless, the bill proposes the creation of a national register of gaming businesses, the establishment of restrictions on where gaming businesses can locate, and some form of consumer protection for those who participate in gaming. For example, slot machines would have to return to players a minimum of 80 percent. Operators found in violation of regulations would be subject to a fine of 500 times the minimum wager.

Allowed forms of gaming would continue to be cylindrical games like roulette, card games, dice games, slot machines, lotteries, bookmaking and tote organizing. Advertising of gaming based outside the country, presumably referring to online gaming sites, would be prohibited.

If consolidation is being promoted, then one of the bigger beneficiaries will be Ritzio Entertainment Group. Worldwide, the billion-dollar-a-year company operates over 1,000 locations and 55,000 slot machines, in 15 countries.

In Ukraine, Ritzio has more than 150 gaming locations, including the River Palace Casino & Entertainment Centre. The River Palace is the largest casino in the country-21 tables and 100 slots-and is located on a ship on the Dniepr River in Kiev. Ritzio operates over 10,000 machines around the country, in slot clubs under the brands King Entertainment Centres and Metro-Jackpot Gaming Clubs. The company also owns the local sports betting chain Sport Pari.

Undoubtedly the most transparent operator in Ukraine is the Olympic Entertainment Group-OEG. The public-listed Estonian operator opened its 22nd Ukraine property in July, just three and a half years after establishing its local subsidiary there.

At the end of 2007, OEG had 19 properties operating a total of 950 slots and 17 tables in Ukraine. They produced gaming revenue of €11.3 million, accounting for about 7.5 percent of parent OEG’s total for the year. Ukraine was OEG’s fastest growing subsidiary.