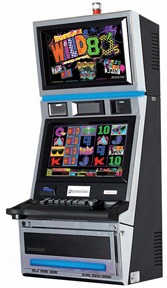 This new 50-line video slot from Multimedia plays out the 1980s theme with sharp graphics, special random wild symbols and, most of all, humor. The game features are all hosted by a “Valley Girl” kind of character, which creates a fun atmosphere for players.

The 50-line base game contains a random wild-symbol feature called “Flip’n Wilds.” On any given spin, the feature can send up to three cards flipping across the screen to land on reel spots as wild symbols (if the “Wild” side of the card lands) prior to the spin. Symbols on the reels disappear in clouds of colorful smoke before the cards start flipping. The primary game also includes very frequent stacked wild symbols.

There are two bonus features in the game. In the “Fresh Free Spin Bonus,” scattered bonus symbols on the first, third and fifth reels trigger eight free spins, with increased Flip’n Wild occurrences.

The game also offers a picking event called the “Boom Box Bonus.” In an entertaining display, different-colored buttons appear—sort of a disco mixing board—and the player is prompted to begin picking buttons to push, to reveal an ’80s icon. At the left of the screen are bonus award amounts. The player picks until unveiling four matching disco icons—cassette tapes, speakers, turntables and the top boom box—to return the corresponding award. (“M.C. Money in the house!”)

During the picks, players also can reveal a wild card or multiplier. Of course, all the picks are set to the backdrop of booming ’80s-style music, as are the rest of the audio and visuals of the game.