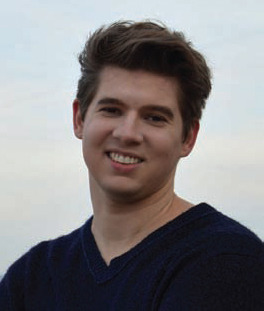 Kids sometimes imagine themselves as musicians when they grow up. Cory Roberts took it beyond imagination. He studied classical guitar, an instrument he learned from his parents, both music teachers.

“Since I started at a young age, playing guitar is almost like an extension of my hands,” he says.

The 26-year-old, who grew up in Cleveland, majored in classical guitar performance at Case Western Reserve University. But what brought Roberts to these pages is not his virtuoso handling of a guitar. His position as associate publisher for CDC Gaming Reports harkens back not to his music affinity but his other lifelong passion: technology.

“Computers and video games have always been a huge part of my life since my grandfather gave me his old Commodore 64 when I was about 4,” he says. “From learning web programming in elementary school to running my own websites in high school and college, I have always kept myself busy and up to date with technology.”

Right after college, Roberts landed a tech job with CDC Reports founder Jeffrey Compton, charged with upgrading the computer system and other technology concerns with the nascent website.

“I am forever thankful for his confidence in me,” he says of Compton.

At that point, Roberts had little interest in the casino industry.

“As Jeffrey and I got to know each other, I started learning a bit more about his work and got involved,” he says.

Compton is a natural leader, Roberts says, taking CDC Gaming Reports from a tiny unranked casino website based in Cleveland to one of the top casino news websites in the world.

“Jeffrey has always kept a great team of people by his side,” he says.

Roberts assists with day-to-day operations as well as long-range planning. “I helped bring to life several of Jeffrey’s crazy ideas, such as a searchable casino news database with over 30,000 articles. I also manage many of the projects that come up.”

A typical day begins with updates on the CDC Reports website and organizing the news items for the Flash, the morning report. By midday, Roberts is researching and putting together the stories for Last Call, the afternoon report.

While his knowledge of the industry was nil when he began with CDC Reports, he now has enough of a feel for the ins and outs, ups and downs to formulate his own views.

“Casinos will need to provide an increasingly social environment, and should resist providing similar experiences to what people can get at home, on their cellphone or TV. I think that many of the successful casino machines of the future will be a sort of resurgence of the video game arcades in the ’80s and ’90s.”

As for casinos as a career choice, the door is open, Roberts says. “The gaming industry is where two people can be successful in similar ways with wildly different and seemingly irrelevant backgrounds. Care for your relationships, express yourself, and you will find an industry that is incredibly friendly and full of opportunities.”