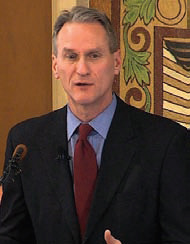 The Cheyenne River Sioux, the only one of the nine tribes in South Dakota that doesn’t operate a casino, wants one. Last month members of the tribe told the state’s governor, Dennis Daugaard, who was attending a tribal council meeting, that they want a tribal state gaming compact.

The tribe wants to add slot machines to an expansion of a motel the tribe owns in Eagle Butte and to build a stand-alone casino on tribal land near Pierre-Fort Pierre.

Sharon Lee, a tribal council member who chairs the tribe’s gaming task force, told Daugaard, “We’re saying the sooner the better for us. I think our tribe is finally at a point where we’re ready for it.”

The tribe had a gaming compact more than 20 years ago, for a casino along the Missouri River along the reservation’s eastern boundary. However, the tribe never executed the compact, and is researching to see if the compact is still in force.

According to Larry Eliason, executive secretary of the South Dakota Commission on Gaming, the compact is defunct. But the state is always ready to talk to any tribe about renegotiating its compact, he says. Some tribes have made informal inquires about renegotiating, according to the Daily Republic.

Other gaming activity in the area in recent months may have inspired the Cheyenne River Sioux. For example, the Flandreau Santee Sioux will soon add 250 slot machines to their Flandreau casino once the new gaming compact they have negotiated with the state is approved by the Bureau of Indian Affairs.