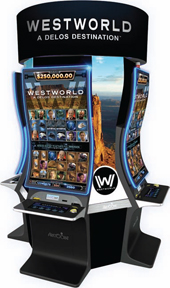 The game is based on the hit futuristic HBO show Westworld, about an Old West-themed amusement park run by androids that run amok. The game takes players on a journey through Delos Lab and Westworld, filled with unexpected twists and turns, fan-favorite characters, beautiful landscapes and high-definition footage of the most memorable scenes, plus episodic photography, along with the show’s distinctive music.

The game displays two six-reel game arrays. The top symbol set represents the Delos corporate world, and the bottom symbol set depicts the theme of the Westworld park the corporation runs. Players can make a 50-cent wager to play the two separate games, but a wager of 80 cents or more merges the two reel arrays for “full game immersion,” with one giant six-reel, seven-row set.

According to the company, the game features a unique math model that is completely new to the gaming industry.

The base game features include Reverie Respin with a “Hold & Respin” mechanic, and Delos Replay, which adds mystery wilds or multipliers to the reel set.

Main game features include Delos Lab Free Games, which are free games with a phantom pick where players can win credits from up to three different free games that play simultaneously; and Mariposa Free Games, which offer the player the action of persistent wild reels for the chance to win big.

The top line jackpot is a multi-site linked progressive prize resetting at $250,000.