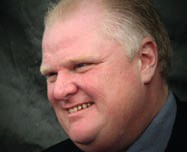 U.S. casino mogul Sheldon Adelson had a 45-minute meeting with Toronto Mayor Rob Ford late in July ahead of what is expected to be a heated debate in City Council this fall over a proposed casino in the city.

Adelson, chairman of Las Vegas Sands Corp., heads one of several companies—MGM Resorts International and Caesars Entertainment among the more prominent—interested in developing the resort-scale complex, preferably in the downtown waterfront district.

It was the first meeting between the controversial Adelson, whose company is under federal investigation in the United States in connection with its gaming businesses in Macau, and the pro-business, pro-casino Ford.

“The mayor has said he would always be open-minded to casinos, but it had to be a good deal for taxpayers and in the best interest of the city,” said Christopoulos.

Adelson said only that “there are a lot of ifs.” In the meantime, he and five other LVS executives have registered as lobbyists in the city.

The casino plan has also sparked interest from two Canada-based companies, racetrack operator Woodbine Entertainment and developer Onex Corp. But the issue is a divisive one, and its fate is likely to turn on the results of a report due out this fall from the mayor’s executive committee on the pros and cons.