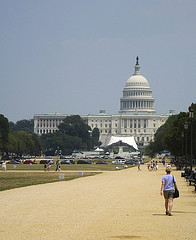 Despite federal efforts to stop online gambling, the nation’s capital could become the first place in the U.S. to offer online poker. And in Nevada, despite objections from the state’s gaming industry, a bill legalizing intrastate online poker moved through the Assembly.

The city council of Washington, D.C., approved a budget for 2011 allowing the district’s lottery to operate a poker website accessible only to residents inside district borders. D.C. Councilman Michael A. Brown introduced the proposal to close a budget gap, which also includes the right to run a fantasy-sports site. Congress had 30 days to reject the provision, but failed to act. The District of Columbia has now become the first jurisdiction to be able to legalize intrastate i-gaming, beating out other states considering online legislation, including Iowa, California, Hawaii and Nevada. New Jersey was poised to become the first state to approve intrastate i-gaming, but Governor Chris Christie vetoed that bill.

The situation is ironic, considering the federal government’s stance against online gambling. In 2006, Congress passed the Unlawful Internet Gambling Enforcement Act (UIGEA), which banned deposits across state lines related to internet gambling. Federal, state and tribal laws had already made online gaming within the U.S. illegal, forcing all poker and other wagering sites to operate overseas. But according to UIGEA, online intrastate wagers did not constitute “unlawful internet gambling” if expressly permitted by the laws of a state, opening up the possibility for states to offer gaming sites within their borders restricted to their residents.

Whether a poker site will be operating out of Washington, D.C., any time soon remains to be seen. The lottery, which is run by the Greek-based company Intralot, has speculated it could have a poker system operating as a test site by the end of the year. The site would be offered in select spots, like hotels, and get gamblers acclimated to the system, before a real wagering site replaces it. The lottery’s CFO, Natwar M. Gandhi, estimated that a poker site could bring in as much as $4.3 million annually, or approximately $13 million by fiscal 2014.

But that is only if Congress has no further objections. Frederick Hill, a spokesman for the House Oversight and Government Reform Committee, dismissed the 30-day time period for Congress to act as symbolic, stating, “That’s not how Congress reviews controversial legislation passed by the District of Columbia. In practice, that is done through the normal legislative process or through spending bills or riders that restrict federal funds based on the implementation of certain laws.” The Justice Department has yet to weigh in on the matter.

In Nevada, an Assembly committee approved a bill that would legalize online poker in the state. But opposition from the casino industry and other important officials could stop the bill in its tracks.

Governor Brian Sandoval said last week that he favors a federal law rather than state legislation approving online poker legislation. He also said the premier gaming jurisdiction in the United States should be the first in line to offer the games.

“The state of Nevada should be the one that sets up regulatory structure and the investigatory structure for those who seek licensing in that area,” said Sandoval.

He urged Nevada to “strive to be the leader in the emerging online poker industry” by being a model of “integrity and innovation.”

“I would hope that any bill passed will not facilitate the legalization of online poker before the federal ban is lifted, or encourage any action that would hinder Congress’ efforts towards lifting of the ban,” Sandoval said.

The bill now in the state legislature would permit online poker in Nevada and in foreign countries where it isn’t banned. The Assembly Judiciary Committee has yet to vote on the bill, sponsored by Assemblyman William Horne of Las Vegas. Horne says he hopes to move the bill out of committee, despite the governor’s support of a federal law; he could push for amendments to expedite its passage.