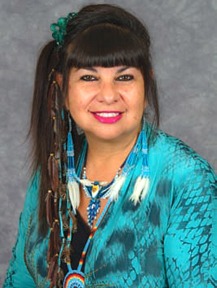 Lynn Valbuena’s commitment to native tribes extends far beyond her role as chairwoman of the San Manuel Band of Mission Indians based in Southern California.

Even the short version of Valbuena’s résumé sounds like someone else’s lifetime achievements: past trustee for the Smithsonian’s National Museum of the American Indian; chairwoman of the Tribal Alliance of Sovereign Indian Nations; delegate to the National Indian Gaming Association; advisory member of California’s American Indian Chamber of Commerce; and trustee for the Los Angeles-based Autry National Center, which is dedicated to an inclusive history of the American West.

Valbuena, known far and wide as “Nay,” is also a 23-year delegate to the National Congress of American Indians, and has been a member of the Advisory Council for the American Indian Chamber of Commerce of California for the past 15 years.

She first served as chairwoman of the San Manuel Band in 1994. Last April, she assumed the role for the second time.

“The future of our tribe,” she said at the time, “requires that we continue the work initiated by our ancestors generations ago not only to ensure our survival, but also to maintain our cultural strengths and a commitment to progress in an increasingly complex world.”

Valbuena learned these principles at her mother’s knee. She is one of three children of the late Pauline Murillo, a tribal elder and author of acclaimed books about Indian culture, including Living in Two Worlds, a view of life on the reservation, in the San Bernardino Mountains near Los Angeles.

“My mom would always say, ‘Never forget who you are and where you came from,’” Valbuena says.

She hasn’t forgotten. Valbuena grew up on a reservation where many homes lacked electricity, clean running water was scarce, and “welfare trucks” delivered food to the tiny San Manuel tribe. Also known as the Yuhaviatam clan of Serrano Indians, the community eventually ascended out of poverty, chiefly by opening a bingo hall in the mid 1980s. It was so successful, a 100,000-square-foot casino was added in 1994. Today, San Manuel employs some 3,700 area residents—98 percent of them non-Indian—at the tribal government center and the San Manuel Indian Bingo & Casino near Highland.

San Manuel diversified its economic portfolio by partnering with other tribes to build a hotel in Washington, D.C. The tribe also owns a hotel property in Sacramento, has developed a mixed-use retail and commercial center in Highland, and has real estate holdings throughout Southern California. The tribe supports various charities, nonprofit groups, community organizations and other Indian tribes, including community hospitals and educational and cultural ventures.

The primary enterprise remains the casino, and it’s poised for the next big step: the possible legalization of online poker in the Golden State. Last November, San Manuel joined the Morongo Band of Mission Indians, California’s three largest card clubs—the Commerce Club, the Hawaiian Gardens Casino and the Bicycle Casino—and the Amaya Gaming Group, owner of PokerStars, to prepare for online poker.

Asked what drives her, she says, “I have a passion to serve San Manuel and the broader native community. It’s what I do to help people in any way that I can.”