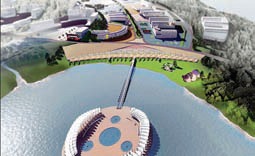 A casino resort zone now under development in Russia near its borders with China and North Korea hopes to reap a bonanza by attracting displaced Macau high rollers.

Muravyinaya Bay, some 70 kilometers (43 miles) from Vladivostok and less than five hours from Macau, is being touted as an elite tourist destination with five resorts including luxury hotels, ski resorts, golf courses, a yacht club and high-end retail, according to Casinorelease.com. Altogether, the resorts will have 5,000 to 7,000 disposable hotel rooms, with 1,200 tables and over 5,000 slots in a gambling area spread across 620 acres.

The first resort to open in the Primorye gambling zone is being developed by Lawrence Ho’s First Gambling Company; its grand opening, postponed from last September, is now set for April.

The target demographic is 300 million people from China, Korea and Japan, and the government is making it easy on operators with tax incentives. Russia reportedly charges just 1 percent of gross gaming revenue per gambling unit, including both slots and gaming tables. After that, the commission is fixed. The government also allows 1.7 percent payouts to junket operators, compared to Macau’s 1.25 percent.

Among the investors are the First Gambling Company of the East, owned by Lawrence Ho, along with Cambodian NagaCorp. and Russian Diamond Fortune Holdings Prime.

It is “Vladivostok’s legacy as San Francisco of the East that qualifies this eastern Russian capital as the true heir of Macau,” reported Casinorelease.com. “Therefore, the current €1.8 billion (US$2 trillion) investments represent only a stepping stone in what might turn a new global gambling destination.”