Pilot project will allow citizens to gamble in government-owned resort 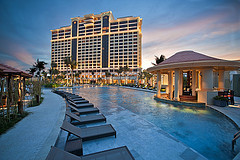 In a move that could signal a softening of Vietnam’s longstanding opposition to gambling by its citizens, lawmakers debating new regulations for the industry are discussing a plan to allow locals to play in a casino proposed for a special economic zone near popular Halong Bay.

The Communist Party’s decision-making Politburo is reported to favor what is described as a pilot project that would be limited to citizens who meet certain income requirements and “have a record of good conduct.”

The National Assembly also is discussing legalizing sports betting, which authorities know is heavily patronized by Vietnamese through underground websites and other networks.

Prime Minister Nguyen Tan Dung visited the province of Quang Ninh last month in connection with a government plan to develop a mixed-use resort with gambling in the 1,800-hectare Van Don Economic Zone. Quang Ninh is about 160 kilometers east of Hanoi and is home to a casino in Mong Cai that caters mostly to Chinese. The zone adjoins Halong Bay, which attracts millions of foreign and domestic tourists a year. Upscale hotels in the area also feature casinos which, like Mong Cai’s, are restricted by law to foreign passport holders.