These days, there are countless ways to pitch your products online. But it all starts with knowing your customer, and telling a great story. 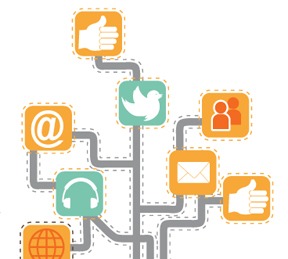 It all started back in the old days, with a little startup called Facemash. In 2004, at the dawn of the social media era, a group of Harvard dorm rats launched the website with the lofty goal of deciding who on campus was “hot” and “not.”

From that auspicious start, the site renamed Facebook has exploded into the most influential social networking website on the planet, with some 1.35 billion users worldwide (yup, approximately the population of China). These consumers now do the work of market researchers, they do it better, and they do it for free.

“Facebook’s greatest trick was convincing people to volunteer all their personal details—their birthdays, whether they’re single, left-handed or Republican—all that seemingly innocuous information,” says Rich Sullivan, CEO of Red Square Gaming in Mobile, Alabama. “It traded people’s desire to connect with each other for all their personal information, which is now sliced up in nice little data buckets for advertisers to sell.”

The success of Facebook has spurred a virtual army of social sharing sites and niche platforms—from Twitter and YouTube to Instagram and Pinterest, from WhatsApp and Snapchat to Vine, Vimeo and countless others. All of them can drive traffic to your business. But which ones are right for your property? How can you keep up with the constant rollout of new social platforms? Should you even try?

“The pace is maddening. The problem is there’s a new shiny thing every other week,” says Sullivan. “You’re still playing with this week’s shiny thing when the next one pops up. And none of it is a silver bullet.”

While Facebook and Twitter have stood the test of time, other channels that once were “hot” (think Myspace, Foursquare) now are “not.” In March, for example, the live-streaming video app Meerkat dominated the news for just a few days before being upstaged by a similar app called Periscope.

The digital landscape is seismic, with upstart channels challenging the big boys and market share being split or redistributed among a growing number of competitors. Facebook, for example, is now so content-cluttered that it’s losing its power to provide organic reach (i.e., free marketing). Yet it’s also making headway in the video-posting market, which until now essentially has been owned by YouTube.

“The misperception of technology and social media is that it’s free and we just need to have a Facebook page or put a video on YouTube and it will go viral,” says Sullivan. “But the organic reach for any brand’s page on Facebook is 1 percent to 5 percent.” So if you have a half-million Facebook fans and you post a photo saying Carrie Underwood or Steve Aoki is in the house, only 5,000 people are apt to see it.

Get On Your Soap Box

Sullivan likens Facebook and other digital platforms to radio, which started out commercial-free, and then started selling soap (hence the term “soap opera”). “It is really turning into a hyper-targeted broadcast medium, if you think about it—a very modern technology that’s following in the footsteps of traditional media in the way it has monetized itself.”

“In 2014, social became a pay-to-play type of place,” agrees Justin Cohen, president of Internet Marketing Inc. in Las Vegas. “The big story of 2014 rolling into ’15 is advertising, especially on Facebook. It’s become a necessity. That’s why Facebook stock is up from $18 to $85.”

Here are some stats about the world’s dominant social network:

• According to a 2014 report from the Pew Research Center, 57 percent of all American adults use Facebook.

• The site’s reach continues to be multigenerational: More than 65 percent of millennials have Facebook accounts, along with almost one-third of U.S. senior adults. Seventy-three percent of kids 12-17 also log on.

• Each user is connected to an average of 80 pages, groups or events, according to Facebook. Reach one user, and you’re indirectly linked to all of them.

For example: The MGM Grand Facebook page includes previews of the 2015 Billboard Music Awards and the upcoming Mayweather-Pacquiao fight, showcases the resort’s restaurants, spa, pool and hotel suites, and includes plenty of love notes from happy patrons. A QR code takes you to the MLife rewards program, and with another click you can plug into a myVEGAS slots app for a non-cash gaming program that invites you to play on iOS or Android and level up.

As the second-largest search engine in the world after its parent company, Google, the video-sharing website draws 1 billion unique viewers per year and is one of the highest revenue-generating online advertising forums, says Cohen.

YouTube pre-roll ads (those commercials that precede the video you want to watch) provide an almost-captive audience for 15 seconds, 30 seconds, 60 seconds and longer. Beyond stupid pet tricks, Sasquatch sightings and other video favorites, here’s why YouTube matters:

• In 2014, viewers spent 1 billion minutes watching just the top 10 YouTube ads. And many of the winning ads ran for more than three minutes (hint: content is king).

• A reported 80 percent of viewers remember the video ads they see online.

• Half of YouTube videos are viewed on mobile devices.

With skippable in-stream ads, there is no charge to the advertiser when viewers click through—even if they watch 59 seconds of a minute-long ad. “Thousands or tens of thousands of people could see most of your ad for free,” says Cohen. Of course, it’s even better when they stick around, so you’ve got to serve up memorable content.

For example: On the SLS Las Vegas website, a YouTube link takes you to videos of the iconic former Sahara during its $425 million renovation, with electric images and appropriately pulsing music, old-time videos of Sinatra from the Rat Pack days, and a video of the property popping the cork on New Year’s Eve.

In 2006, when Twitter was launched, co-founder Jack Dorsey described its 140-character tweets as “short bursts of inconsequential information.” Though usage dipped slightly from 2013 to 2014, Twitter is not inconsequential if your goal is to reach a hip, informed millennial audience. Here’s more:

• According to Twitter, the site has 288 million monthly active users.

• An average of 500 million tweets are sent per day.

• Eighty percent of active users are on mobile devices.

• Though less than 60 percent of social network users in the U.S. are on Twitter, the channel is popular among younger educated Americans, and the average user has 208 followers.

“There is less focus on advertising” on Twitter, says Cohen, “more focus on getting content out in short, concise ways. Twitter is a place where people will reach out and talk to you, and if you’re willing to listen or better yet to engage, your customers are there.”

On this visual bookmarking service, users save images to virtual scrapbooks called pinboards. Populated mostly by women, Pinterest is not unlike a woman’s magazine with its emphasis on crafts, home décor, fitness, fashion, DIY and recipes. It remains a great way to reach a population that loves to share compelling photos and video, and also loves to shop. “Think of what we have going on visually in our casinos and restaurants—they could all be communicated through Pinterest boards,” says Cohen. “We could have 50 boards just for weddings.”

• According to the latest numbers compiled in 2013, Pinterest has about 50 million monthly active users in the U.S., and 70 million worldwide.

For example: Pinterest boards on the Borgata website offer recipes from the property’s celebrity chefs, so you can make Wolfgang Puck’s porcini mushroom pizza or Bobby Flay’s grilled brie and goat cheese and then “view it, share it, love it!” The site also recently offered five cocktail ideas for an Oscar viewing party.

There’s an old saying among creatives: “Show, don’t tell.” With the proliferation of photo-sharing and video-sharing technologies, that axiom has never been more true.

Consumers have become accustomed to entertaining, engaging, sensory-rich messages. YouTube says the most shareable ads are those that “tug heartstrings and tickle funny bones.” But you don’t have to go viral to be effective. “How many people actually engage with your billboard?” Cohen asks. “If you told me a few thousand people a month watch my billboard and engage with it, I’d feel a whole lot better than hearing that hundreds of thousands of people drove by.”

Thanks to location-targeting programs like geofencing (which pinpoint people’s locations within a premapped or “fenced” geographical area) and beacons (which track people’s movements within a property), marketers and advertisers not only know who’s out there. They know where.

“Everyone’s walking around with a GPS in their pocket, which is another kind of game-changer,” says Sullivan. Beacons serve as a sort of “souped-up Wi-Fi” that allows operators to identify a patron’s location—in the food court or buffet, at the spa or pool, in the shopping district—and deliver appropriate messaging.

“It’s really about having a two-way communication, whether people are or aren’t in your house,” says Cohen. “You can talk to them about the poker tournaments, what DJ is in your nightclub… Long story short, you can focus on driving foot traffic to the mall, selling show tickets, getting heads in beds,” or promoting a poker tournament.

Casinos are already testing live-streaming platforms to showcase that poker tournament in real time to people as they touch down at the airport or drive into town. That outreach will grow in importance as casinos try to “shift our clients from those who primarily gamble, people who are over 40, to the people we need to gamble, who are under 40,” says Cohen. “You have to resonate with them by communicating the way they want to communicate.”

It’s no secret you’re out to sell your experience and amenities, get heads in beds and feet on the casino floor. But these days you have to dial down the pitch.

“We try to shy away from the promotion side, and when we are promoting, we try not to sound like we’re promoting,” advises Cohen. “If all we do is take the tactics we use in direct mail, which is 100 percent promotional, and try to translate that to digital, it doesn’t work. People want to see cool videos and hear about cool stuff happening. Share a recipe or show how to have a great poker night at your house. Think selflessly, not promotionally. Then they’ll pay attention.”

Remember that all roads should lead to your home page. Originate all content on every channel from your website. “SEO (search engine optimization) is all about content, whether it’s infographics, videos, memes or contests,” says Cohen. “They all largely should live on your domain instead, and then you share it on social from there, so anyone who picks it up links back to your website.”

But first and foremost, no matter what channels you use, tell a good story. Illustrate it with amazing images. Capture imaginations. Make ’em laugh. Or cry. As original “Mad Man” David Ogilvy wrote in his 1963 classic, Ogilvy on Advertising: “What really decides consumers to buy or not to buy is the content of your advertising, not its form.”

It’s comforting to know that some things never change.