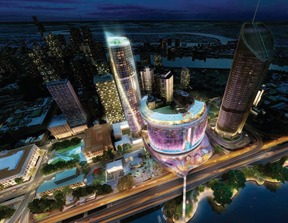 James Packer’s Crown Resorts Ltd. has lost its bid to develop a new casino resort in Brisbane, capital of Queensland, Australia. Echo Entertainment Group, which already has a casino in the riverfront city and a monopoly on gaming in the market until 2019, fended off its rival to win the second license. On the news, shares of Echo stock gained 3.5 percent to A.01 (US.65), its highest level since a June 2011 initial public offering, reported Bloomberg News. The stock has risen 32 percent this year.

Echo will hold 50 percent of the Destination Brisbane Consortium. Chow Tai Fook Enterprises Ltd. and Far East Consortium International Ltd. each will have a 25 percent stake. All three will invest capital in the A$1.5 billion ($1.1 billion) Brisbane resort. Echo CEO Matt Bekier said the result “will be an asset for this state that will compete with anything in Macau, Singapore or other destinations around the world.”

Crown Resorts had partnered with Greenland Investment in its proposal. It hoped to repeat the 2013 triumph in which it ended Echo’s monopoly in Sydney by winning the right to develop a new casino on Sydney Harbour, across from Echo’s Star resort. Crown recently received approval to begin construction, with opening slated for 2019, when the Echo agreement expires.

According to Reuters, Echo said it will rely on its investment partners to bring high rollers from China to Australia’s third-largest city, giving VIPs a new alternative to Macau and Singapore. Bekier said Echo currently derives about 30 percent of its Sydney revenue from Chinese high rollers.

“Chow Tai Fook has very deep relationships with Macau-based junkets,” he added, “and they have a special incentive for bringing additional volume of VIP business to Australia that we don’t currently see.”

According to the Australian Financial Review, developers were intent on downplaying typical casino glitz in designing the riverfront resort, which is expected to be complete in 2020.