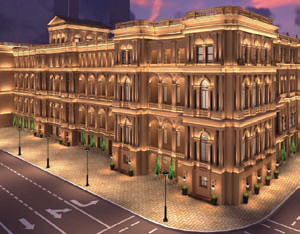 Australian casino operator Echo Entertainment has unveiled plans for a major redevelopment of its Treasury Casino site in the Queensland capital of Brisbane as part of its A.4 billion proposal for creating an integrated entertainment precinct in the city’s central business district.

The project includes a six-star, 90-room hotel, a 600-seat function room, gourmet restaurants and other tourist attractions. The plan also calls for scrapping the Treasury name for one Echo believes will better reflect the luxury status of the new complex.

Queensland’s Deputy Premier Jeff Seeney has announced that the state is accepting expressions of interest for redeveloping a nine-hectare area of the central business district, and Echo rival Crown Resorts already has presented a competing proposal that includes a large-scale resort similar to the company’s Crown Melbourne.

The state is hoping for a significant amount of international interest in redeveloping the area, and the developers will have to prove their plans will be world-class. Plans must also protect and enhance the precinct’s heritage buildings, officials said.