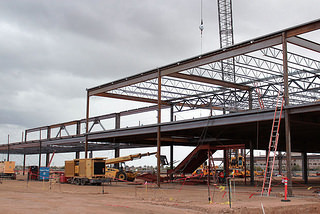 Despite opposition from the town, Congress and other tribes, the steel skeleton of the Tohono O’odham Nation’s 0 million West Valley  casino has started to rise near Glendale, Arizona.

A temporary casino, with 1,089 slots, is scheduled to open later this year while construction continues on the permanent structure.

Tohono Gaming Enterprise CEO Andy Asselin issued a statement commenting on the progress that has been made. “It is great to see dozens of companies and more than 1,300 construction workers coming together to get this fantastic new attraction up and running,” he said.

The casino is expected to generate at least $300 million in revenue annually. The casino project is near the University of Phoenix stadium.