With a corner on gaming in scenic Western New York, the Seneca Nation of Indians is confident it can withstand competition from three new megaresorts. 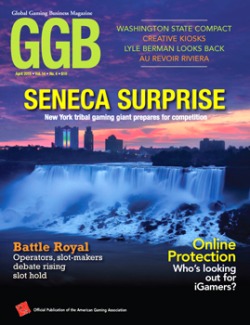 Last December, a New York government panel approved three lavish new casino resorts to be built upstate. Though some operators are quaking at the prospect of additional competition—in state and out, including Massachusetts, where both Steve Wynn and MGM Resorts plan billion-dollar casinos—the Seneca Nation is remarkably unfazed.

“There’s going to be more competition for the gaming dollar,” Walker concedes, “and we’ll feel some effect from new operations. But we actually may grow our business by expanding the market among people who haven’t had casinos readily available. We think our locations will give us an advantage.”

“The challenge will be how to grow these markets,” says Doni Taube, senior vice president of marketing for Seneca Gaming, who came to this relatively small market from stints in Las Vegas and Singapore. “But it’s an exciting time for western New York. We have a great vision for five, 10 years down the road to grow not just the company but the whole region.”

As for those new casinos—including the $425 million Lago Resort, which will be located less than a two-hour drive from Seneca Buffalo Creek—Taube says, “I don’t necessarily view them as competition. Bring ’em on in.”

The nation’s business portfolio includes a chain of convenience stores, a telecommunications firm, a construction management company and a hydroelectric business. Last year, a nation representative acknowledged it’s looking at yet another growth industry: marijuana sales.

But the economic driver for the 8,000-member sovereign nation is gaming, and it all began with a handful of low-stakes bingo halls that opened in the 1970s, about the same time Atlantic City launched its first Boardwalk casino. It took 30 years and the impact of a terrorist attack for New York to expand the state’s gaming industry; after 9/11, scouring for new revenues to stabilize a reeling economy, lawmakers approved VLTs at racetracks and a cluster of tribal gaming halls.

Since then, Seneca Gaming has developed three allied but distinctly different Class III casino resorts: an international destination, a regional attraction, and a downtown urban resort targeted primarily at locals. Their collective feeder market includes Ontario to the north, Ohio and Pennsylvania to the south and west, and southeastern New York.

Over the past dozen years, the nation has invested more than $1.1 billion in the economy of western New York, and contributed almost a half-billion in tax revenues to state and local governments. It has also created jobs for some 4,000 New Yorkers, Indian and otherwise, and sparked development in each of the communities it serves.

After years of resisting full-scale gaming, the flagship property of the Seneca Nation was approved in September 2002, after the tribe engineered a gaming compact with then-Governor George Pataki. Along with the agreement came an ambitious deadline: the Indians were given just 100 days to convert the aging Niagara Falls Convention and Civic Center into a world-class gaming hall.

It would be no small task. The civic center, part of a failed urban renewal project launched in the mid-1970s, once had been likened to an oversized Quonset hut. The Senecas, assisted by legendary tribal gaming executive Mickey Brown, invested $80 million to refurbish the complex, adding a casino with almost 3,000 slot machines and 100-plus tables, as well as a 400-seat showroom theater.

“Against insurmountable obstacles,” says Walker, “they opened on December 31. And they really never looked back.”

In the years to come, reflecting the nation’s growing prosperity, they added a 22,000-car parking lot, a 26-floor, a 600-room luxury hotel and spa and a 2,400-occupancy event center. In 2014, they completed a $26 million renovation to give “a more Las Vegas-like experience to Niagara Falls,” said Walker.

“The evolution of this property in the heart of downtown Niagara Falls from a site of urban decay to one bustling with activity stands as a testament to quality, which is what our guests demand, and that is exactly what the Seneca name stands for,” says Barry E. Snyder, Sr., president of the Seneca Nation of Indians.

Today, Seneca Niagara is part of an ongoing plan to turn the Cataract City—which lost more than 50 percent of its manufacturing jobs between 1970 and 1990—from “a land of lost economic opportunities (to) a region on the rise,” according to a February report in the Niagara Gazette.

The resort takes advantage of a built-in tourism trade. Still renowned as the Honeymoon Capital of the World, the city’s chief attraction, the magnificent Falls, attracts some 8 million people per year; in the recent sub-Artic winter, tourism actually increased 67 percent as people flocked to witness an extraordinary phenomenon: Niagara Falls, frozen over.

With the Canadian dollar now worth less than 80 cents compared to the U.S. dollar, Canadians regularly cross the border to shop and take advantage of the favorable exchange rate; approximately 30 percent of patrons at the casino are Canadian.

“From a market perspective, I think the future is bright,” says Walker.

The Senecas’ second gaming hall debuted as a temporary structure in 2004; the permanent $160 million resort opened in 2007, with a 68,300-square-foot casino floor, three restaurants and a 212-room hotel (the temporary facility was then retrofitted as a 2,400-seat event center). In 2012, a $53 million expansion almost doubled the size of the hotel.

Now the largest employer in Salamanca, Seneca Allegany attracts more than 3 million people each year—and they come for much more than gambling. Just minutes away from the 65,000-acre Allegany State Park, the resort makes the most of its proximity to the great outdoors and four seasons of recreation.

In fact, one of its most popular annual events is the AMSOIL Championship Snocross tour, “a grueling gladiatorial battle of man and snow machine” that is broadcast live on NBC Sports. Snowmobiling is so ubiquitous around here—it’s a billion-dollar business the Empire State—the Senecas have even established a snowmobile trail that connects the eastern side of the Salamanca property to a warren of trails in the state park, which in turn travels all the way to Buffalo.

Such diversity of choices in entertainment is vital in a mature market, where gaming alone is no longer enough. More casinos have opened in the Northeast in the past decade than in any other area in the United States, with 26 casinos opening since 2004.

“A lot of new casinos in the area have popped up—Ohio, Presque Isle, Hamburg Fairgrounds—but none of them has the property that goes beyond the box (slot machine),” said Marc Papaj, vice president of resort operations, in 2014. “We have a pool, spa and salon, two restaurants, and we offer a level of sophistication and luxury that none of the area competitors can even approach.”

In 2006, the third Seneca property broke ground bought on nine acres in in a former “brownfield” section along the Buffalo waterfront. Originally conceived as a $330 million casino hotel, the project was stalled by the recession and later downsized. A more streamlined $130 million casino, sans hotel and built with steel salvaged from the original framework, opened in the city’s Inner Harbor in August 2013.

The urban casino was designed to complement the city’s downtown, a former port and manufacturing hub in search of its own renaissance—with a big assist from Governor Andrew Cuomo’s “Buffalo Billion” economic development program. Though the numbers aren’t in yet, Cuomo is already hailing Buffalo as a “national success story.”

“There has been a real resurgence in development downtown,” says Walker. “We got in ground with Buffalo Creek and a couple of months later, they announced HarborCenter”—the $172 million mixed-use sports arena and home of the NHL Buffalo Sabres that opened last October. “Now the city of Buffalo enjoys two great anchors. That provides us not just local customers but that frequent business traveler as well.”

More investment is coming with the University of Buffalo’s new School of Medicine and Biomedical Sciences, now under construction on Main and High streets. Walker compares the buzz around Buffalo to the dramatic recovery in Cleveland, which will show off billions in new development when it hosts the Republican National Convention in 2016.

In 2014, Seneca Gaming upgraded its entire customer management system, consolidating three loyalty programs into a universal player’s club card that can be used at all three properties. The rewards are generous by design, offering one point equaling one dollar for every $170 spent, versus a competitor who offers one point worth 10 cents for every $20 spent. “We are almost $30 less, so customers earn faster with us, and they recognize that,” says Taube.

The company uses web monitoring and geofencing to track player activity and frequency, offers perks based on customer preferences, and keeps tabs on what its patrons are saying on social media. “These are very important tools that can really make or break your reputation as a company, what they’re saying about you, good or bad, on Twitter and Facebook,” says Taube. “We pride ourselves on our service levels, and we’re very fortunate that we have more positive write-ups than negative.”

As technological changes extend from personal mobile devices to the gaming floor, the casinos are exploring new ways to entice players who otherwise might be uninterested in slots, especially younger players. “We don’t presently offer mobile gaming, but we’re starting to introduce community gaming, where groups of people can play at a bank of connected machines to make the games more interactive,” says Audrey Oswell, COO of Seneca Gaming. “We’re going to start testing it this year at the Buffalo property.”

Other changes are also up: last summer the company introduced new branding with new logos and a new tag line, “It’s Time to Play.” Officials

The corporation is in good fiscal shape too, having restructured $379 million in debt and lowered its interest rate from 8.5 percent to 1.5 percent. The reduced rate will help save 20 percent on costs annually and make Seneca Gaming debt-free by 2019. Even in a crowded market, Moody’s last year forecast that the opening of the Buffalo Creek permanent facility “will help grow SGC’s gaming revenues over the next 12 months, despite increasing competition.”

As for those three proposed New York casinos, expected to open in the next few years, Walker says Seneca Gaming will stay the course, making prudent capital investments and partnering with its host communities to offer distinct but rewarding integrated resort experiences. Taube, who is a veteran of the gaming industry in both Las Vegas and Singapore, says all of the properties have a neighborly feel that give them a competitive edge.

“People are sincere when they talk to you. They are very caring, and listen to your needs and wants. I think those things translate to how well the operational team does at various properties. Our employees grew up together, they went to the same high schools and universities. Everyone knows each other.  Though we have an international, local and regional destination, it feels like a hometown. I don’t know if it’s the water in western New York, but it’s a wonderful experience.”

“Competition is fine,” concludes Oswell. “We’ll stay a couple steps ahead of them.”