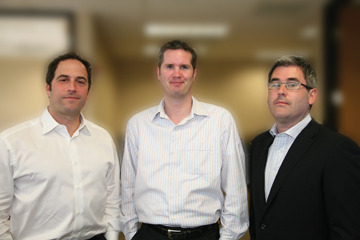 For the past few years, the “go-to” gaming analyst in the industry has been Deutsche Bank’s Bill Lerner. He was the first gaming analyst to leave Wall Street and actually live in Las Vegas,  a move that gave him respect and inside knowledge of gaming. Earlier this year, Lerner, along with Deutsche Bank colleagues Rich Moriarty and Grant Govertsen, left the investment bank to start their own research and consulting firm, Union Gaming Group. The group started with a bang, advising MGM Mirage through a a difficult transition and helping to line up part of the $2.5 billion in financing the company needed to reduce debt and finish the CityCenter project. Global Gaming Business Publisher Roger Gros sat down with the principals from Union Gaming at their Las Vegas offices in May. To hear a podcast of the interview, where the group discusses individual jurisdictions and companies, visit www.ggbmagazine.com and click on the GGB Podcast button.

GGB: You three have been on Wall Street for many, many years. Why did you decide to leave Deutsche Bank and start up your own company?

Rich Moriarty: This is something we’ve talked about for over a year now. Luckily, Deutsche Bank brought the three of us together. Given the state of what’s happening on Wall Street and what’s going on in the gaming  industry, we felt like it was a terrific time for the three of us get together and go out on our own.

What was the impetus behind that? Did it help that gaming is not a darling on Wall Street anymore?

Bill Lerner: It’s true the sentiment on the gaming sector was quite negative and to some degree remains that way. Some of our competitors had been getting out of the business and continue to withdraw. We saw it as an opportunity to actually embrace the industry that we believe has long-term secular growth prospects while others were running the other way. To continue to be located here in Las Vegas is a real opportunity on which we want to continue to capitalize. Broadening our gaming research coverage to some names that are non-U.S. is a real opportunity for us.

Do you still have a relationship with Deutsche Bank or has that been severed completely?

RM: We do. We left on great terms. They certainly weren’t pleased with our departure; we essentially lifted out their equity gaming team, but certainly in this type of environment they understood. It was a terrific opportunity for us, so it goes to show you how good the leadership is at Deutsche Bank as well.

How about relationships with other investment banks? Are you allowed to do that at this point, or is there some sort of non-compete in place?

BL: No, no non-compete whatsoever. We will move forward and continue to work with many of the institutional investors that we’ve worked with over the years.

Deutsche Bank is a big player in the gaming business. Without the weight of that name behind you, do you expect to have the same kind of access and will you be able to gather the same kind of information you had in the past?

From an access perspective, I don’t envision any real issue. In fact, many of the folks in different aspects of the industry have been into us to talk about how we might be able to work together differently than in the past. Many institutional investors who are our clients have been very supportive of what it is we have in mind. We haven’t run into any issue. It’s a fair consideration, but so far, so good.

If a government came to you and asked how best to implement gaming, would you be able to tell them what the impact of a high tax rate is versus a low tax rate, that kind of thing?

Grant Govertsen: Absolutely, and we’ve been looking at that for years and years and years. As we model earnings for these various companies, we’re looking at several jurisdictions, some with onerous tax rates and some with much more favorable tax rates. I think we’ve got a pretty good handle on what the sweet spots can be.

There’s a suggestion that we’re going to see a lot of sales of individual properties from the big companies like Harrah’s, MGM, Las Vegas Sands, Station, etc. Do you believe that’s going to happen to any great extent, and what will be the trigger that really starts it?

There are a lot of folks who think they can essentially steal properties from some of these troubled gaming companies. But what I think is going to be challenging with that mindset is that it doesn’t resolve any leverage issues for any of these gaming companies to sell assets cheaply enough to be attractive for many of the folks who want to buy gaming assets.

Some of the gaming operators recognize that sometimes it makes sense to pay a premium for some transformational asset in their particular situation. I think that ultimately there’s a happy medium. I do think you’ll see deconsolidation in the Strip corridor. You may see an asset trade in Macau, and you might see a regional casino asset trade as well.