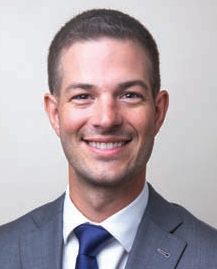 Colin Mansfield’s involvement in the gaming industry began in a somewhat unintended manner. In the early years, Mansfield was working for a financial data firm and his coverage happened to include a few public large-cap U.S. gaming corporations, along with insurance companies and small-cap banks. After receiving his chartered financial analyst (CFA) designation, Mansfield joined the U.S. Corporates team at Fitch Ratings, where he started covering the gaming industry specifically. Up until that point, he was more focused on equity, and Fitch marked his first step into the credit markets.

Nevertheless, focusing on gaming and helping cover Caesars Entertainment during a turbulent time “integrated” him to the industry—he is fascinated by high capital intensity for massive integrated resort developments, prominent jurisdictions and markets, theories on maximizing slot and table game revenues, and the industry personalities.

As Mansfield began covering the sector more in earnest, he soon realized that he would continue to be involved in the gaming industry because of the enthusiasm. As Fitch continued to grow, Mansfield and his team built out their leisure coverage that now ranges from cruise and theme parks to fitness centers and recreational products. Today, they cover more than 60 companies across the gaming, lodging and leisure sectors.

Mansfield’s passion and perseverance guided him through a zigzag path. Prior to becoming a gaming credit analyst, Mansfield bounced between a few sales jobs (including being a stockbroker) and tried to break into sell-side equity research right after the financial crisis. Hard work in the early part of his 20s, including getting the CFA designation and building up a comprehensive skill set, ultimately got well rewarded.

“Joining Fitch presented me with amazing long-term career opportunities,” says Mansfield, advising young professionals that “opportunities present themselves in a non-linear fashion—you can’t predict when they’ll cross your path, but building a skill set with the longer-term vision of being prepared is the best way to position yourself for success.”

Mansfield has been doing numerous speaker series via the analyst classes in the Fitch Corporates group and has been sharing his career story within the organization to instill the long-term mentality for career-building. Additionally, he makes sure to carve out time for his younger colleagues, as he highly appreciates the opportunity of having a manager who spent one-on-one time guiding him through the gaming industry and corporate credit analysis.

“Having one-on-one exposure to my manager was key to my development, and I am trying to pay that forward,” says Mansfield.

Looking at the gaming industry tomorrow, Mansfield believes it is becoming more mainstream and less taboo, particularly after the broad legalization of sports betting.

“Gaming is part of everyday conversations now more than ever, and I think that creates opportunity for more young professionals to consider it as a career path,” he says.

Fitch Ratings promotes a lot from within and encourages rotations through groups across different asset classes, risk management, and managerial roles. As Mansfield sees it, his previous mentors’ and managers’ advancements to bigger roles are a strong motivator for those who want to follow similar career paths.

One particular aspect of covering the gaming industry that Mansfield truly adores is the work-related travel.

“My colleagues and I have been fortunate enough to travel all over the world to see the material capital investments made by the companies we cover,” says Mansfield. “Besides traveling overseas, those trips to smaller U.S. markets have been an added benefit since they are usually places I wouldn’t expect to travel to, such as Biloxi, Laughlin, the Catskills and Black Hawk.”

In his spare time, Mansfield is a golfer who also enjoys cooking and history. He is especially interested in the American pre- and early Revolutionary War history and first-half 20th century European history. A recent trip to Normandy and the D-Day beaches touched his heart in a profound way.