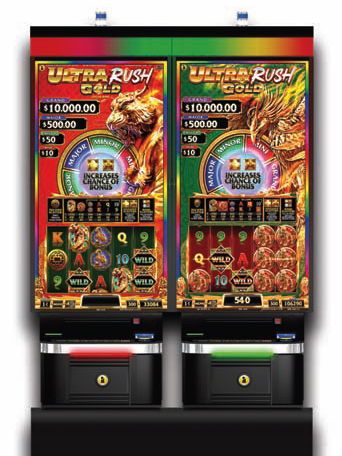 This new game on IT’s V55 and Infinity Summit cabinets takes full advantage of the 55-inch monitors on each cabinet to bring the Ultra Rush game, the supplier’s first to utilize a “hold-and-spin” bonus feature, to a premium format.

The Ultra Gold Rush series is being launched with two sister games—Tiger Run and Mythical Phoenix. Both are five-reel, 30-line video slots. The game character—a golden tiger or a phoenix—is the main difference between the two base games. Like the original Ultra Rush game, each base game awards eight free spins for three scattered bonus trigger symbols. During the free games, all royal symbols are wild, and there are “nudging” wild symbols—wilds that land just above or below a pay line and nudge to the line, potentially forming a win.

The hold-and-spin Ultra Rush Bonus also is reprised, but with a new base-game feature that increases its frequency.

The goal of the bonus is to collect scatter symbols over three spins. Each symbol bears a credit amount, some rising as high as several thousand credits. The feature starts out with three spins on a special set of reels. Each time a scatter symbol lands, it remains in place and the number of available spins resets to three. If three spins occur with no additional scatters, the feature ends with the player awarded the cumulative total of the credits displayed. If the entire 15-space grid is covered with the symbols, the player gets a bonus of $600 (on the penny version at max bet), in addition to the accumulated credits.

In Ultra Rush Gold, the primary game includes normal game symbols that are also orb symbols—they appear as an orb with the game symbol at the bottom. These symbols combine with other game symbols to form the normal line combinations, but they also lock in place to count toward triggering the bonus, in a persistent feature called “Gold Lock Spins.”

This persistent feature mimics the main hold-and-spin feature in a three-spin sequence. The symbols, like the main feature, all include credit amounts on them.

There are other twists added to the main hold-and-spin bonus. During the feature, in addition to the scatter symbols bearing credit amounts, there are symbols labeled “wheel.” At the end of the feature, each of those symbols triggers a spin of the progressive wheel above the reels on the top screen. There are four awards on the wheel. There are static Mini and Minor jackpots of $10 and $50, respectively, plus two progressive jackpots—a Major resetting at $500 and the Grand, resetting at $10,000.

The progressives are available at any bet level, including the minimum 50-credit bet. After the main feature ends, you get as many spins on the progressive wheel as you’ve accumulated. It’s possible to win more than one progressive in a single feature.