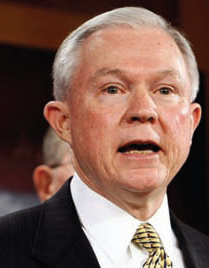 The National Governor’s Association has sent a letter to U.S. Attorney General Jeff Sessions basically telling him to leave decisions on online gaming to the states.

Sessions, in his confirmation hearings, said he might be willing to reassess a 2011 opinion from the Department of Justice that allowed online gambling in individual states.

The governor’s group—which is vice-chaired by Nevada Governor Brian Sandoval, one of three states to allow online gambling—strongly urged Sessions to stay out of a state matter.

“The nation’s governors are concerned with legislative or administrative actions that would ban online internet gaming and internet lottery sales,” the letter said. “The regulation of gaming has historically been addressed by the states. While individual governors have different views about offering gaming—in a variety of forms—within their own states, we agree that decisions at the federal level that affect state regulatory authority should not be made unilaterally without state input. A strong, cooperative relationship between the states and federal government is vital to best serve the interests of all citizens.”

However, many analysts feel that addressing online gambling would be very low on Sessions’ priority lists, especially as President Donald Trump—a former casino owner—has not significantly weighed in on the issue.