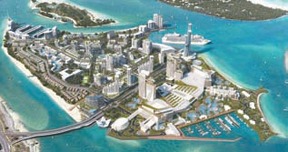 The government of Queensland, Australia, has approved a multimillion-dollar casino project for Wave Break Island adjacent to Sea World; a previous .5 billion plan, which included a cruise ship terminal, would have created the largest tourism project in the state, but was rejected by the new Labor government when community groups objected, reported the Sydney Morning Herald.

State Development Minister Anthony Lynham confirmed the new site would be a five-hectare (12-acre) parcel near Sea World, to be developed by the Chinese-backed ASF Consortium.

ASF Project Director Tim Poole said the plans are under way for the resort, which probably will not be complete in time for the Commonwealth Games in April 2018. “Competition is stiff around the world, so we want to build on what the Gold Coast has got to offer,” said Poole. “With this great location on the Spit, we are pretty confident we can come up with something really special.”

According to Sky News Australia, shares in the ASF group rose 15 percent after the Queensland government announced the revised Gold Coast plan, and shares of Echo Entertainment, which runs Jupiters casino in the same area, dropped 2 cents per share. Echo plans to invest $345 million to expand and refurbish Jupiters, but Morningstar gaming analyst Brian Han said a new casino on the Gold Coast would be “negative” for Echo.