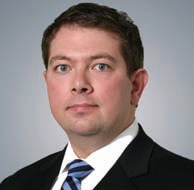 After graduating from the University of Wisconsin Law School, Aaron Harkins became an associate in the structured finance group of a large New York law firm, where he worked on a diverse mix of complex financial transactions. He recalls a fulfilling experience working in New York, and is grateful he was able to learn a tremendous amount from a number of truly remarkable people.

Now 37, Harkins recognizes that the experience helped lead him directly to his current specialization in gaming.

Harkins ranks among the most respected legal advisers in Indian Country, which began when his present firm, Faegre Baker Daniels, convinced him to move to Minneapolis in 2004. They needed someone with his distinctive finance background who was also interested in working in Indian Country.

The opportunity proved too tempting to pass up. From the outset, he realized how much personal and professional enjoyment he took from working with Indian tribes, and his practice quickly became focused almost exclusively on project developments and financings with Native American gaming clients.

After 10 years, now a partner in one of the most respected firms in the industry, Harkins unequivocally states, “I could not be happier with my decision. Every Indian tribe is a sovereign government with its own unique laws, customs and traditions which need to be both understood and respected by non-tribal business partners.” As a result, he gets to work on new and complicated legal issues every day, which has kept him focused and engaged in his practice. “At this point in my career, I cannot see myself doing anything else,” he says.

Harkins realizes that the culture of his current organization and its support for emerging leaders and young professionals is one of the reasons he has advanced so quickly in his career.

“One of the most important gestures to me as a relatively young associate was that my firm encouraged me to travel around the country to numerous conferences and industry events,” he recalls. “This was an invaluable experience that many large law firms would likely not have offered, and it helped me engage into the industry much faster than sitting in an office full-time ever could. Indian gaming is a small community, and throughout these events and conferences, contacts and relationships were formed that could not have developed simply by picking up a phone.”

Moving forward, Harkins sees many opportunities for emerging professionals in his field. He notes that since he began his career in Indian Country, he has worked with many of the key leaders who helped build the industry from the very beginning nearly 30 years ago.

“Many of these leaders are starting to retire, and as new figures step in to help craft the future of our industry, now is the time for emerging professionals to become an integral part of this ever-growing field of work.”