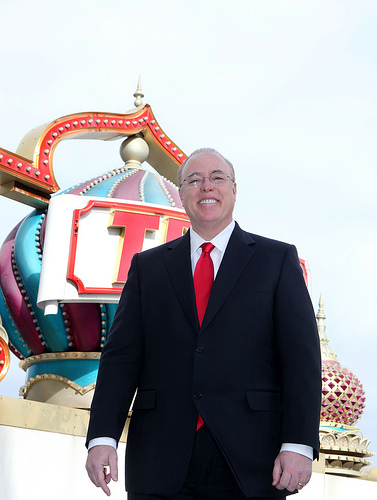 Turning the fortunes around for any business usually involves good and bad news for the people who work there. Bob Griffin got the bad news out of the way as soon as he took charge as the new chief executive of Trump Entertainment Resorts in November, cutting 50 top executives from the payroll his first day, and within a month, announcing 250 layoffs across the board. Left in place, however, were more than 8,000 employees at three properties.

The force reduction, as painful as it was, was necessary to start what Griffin hopes will be the good—a revitalization of the Trump casino brand and the three Atlantic City resorts which bear the name of Donald Trump, now owner of only a comparatively tiny portion of the overall corporation.

This is the third stint with the Trump organization for Griffin, who held executive positions at Trump Marina in the 1980s and 1990s before moving on to Isle of Capri Casinos, where he served four years as senior vice president of operations. For the past two years, he was CEO of MTR Gaming Group, operator of racinos and racetracks in West Virginia, Pennsylvania and Ohio.

Griffin returned to Trump as part of a management shakeup by the company’s new owners, bondholders who acquired the company for $225 million in a bankruptcy sale last summer. He inherits a company which—even though just emerged from its third bankruptcy—was already on the upswing. He credits former CEO Mark Juliano for complete renovations at two of the three Trump casino resorts, the Trump Taj Mahal and Trump Plaza, and for expansion with the new Chairman’s Tower at the Taj.

Griffin says he is addressing what led to the third bankruptcy—a lack of available cash to service suffocating debt—before moving forward to maximize the potential of the freshly refurbished assets.

“I’m very focused on how we operate,” he says, noting two areas of primary importance: cutting marketing costs, and working with other properties and local authorities to project the image that Atlantic City is a safe, clean place to visit.

Griffin says the problem with marketing is simple: Too many giveaways.

“Quite frankly, our reinvestment into our customer has been too rich,” he says. “We have these different silos set up in marketing, each doing its own thing, and they’ve really layered marketing events upon marketing events.

“Even if we look at how we market to our high-end play, the discounts we give are too high,” he says, noting that one goal is to get the “right reinvestment matrix” in place.

The “Trump” name on the buildings won’t be an empty name, says Griffin. He met with Donald Trump soon after joining the company and says the Donald and daughter Ivanka couldn’t have been any nicer.

“They are very supportive of the changes we’ve put in place and what we’re trying to do,” says Griffin. “Several times, Donald said that he’d come down and help us out, whether that means bringing The Apprentice down there or personal appearances. And he said he wouldn’t charge us anything! That’s how committed he is.”

Efforts to improve the image of Atlantic City are being undertaken with other properties, and in concert with efforts by Governor Chris Christie and state lawmakers to create a new tourism district. On the property level, Griffin says efforts will continue to sell Trump Marina (“When we look at how much capital we have to invest, the Marina is probably better suited to be in other hands,” he says) and to build upon the improvements at the Taj and Plaza that were initiated under Juliano.

“We have to not only demonstrate that we can make our interest payments and put some money back into our products, but we have to generate more free cash flow,” Griffin says.

As for Atlantic City, Griffin says he is bullish long-term, as long as operators are honest with themselves about competition coming soon from New York, about cleaning up the Boardwalk, and about the challenge of marketing Atlantic City as a destination.

“We can’t bury our heads in the sand,” he says. “We’ve got to address the problems. But what the state and city are working on will make this a better, family-friendly environment, and a clean, safe place to come and have fun. It’s still a great city.”