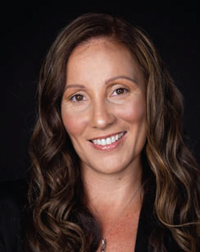 Mimi Williams was born in Buffalo, New York. While she moved around quite a lot growing up, she never strayed too far from the Seneca casinos, where she has enjoyed a rising career in the marketing department for more than 15 years. She even lived for a time on the Seneca Territory in her formative years.

“Going to different schools and making new friends helped in my development as a strong leader,” Williams says. “My father also raised me to be a leader. He pushed me consistently in everything I did, reminded me to always have a positive attitude as ‘attitude is altitude!’”

After graduating from the State University of New York, Fredonia, where she received a bachelor of science in business administration with a concentration in marketing, Williams joined Seneca Gaming & Entertainment as the marketing manager.

“I wasn’t there long, as I was given an opportunity to help open our first property, Seneca Niagara Resort & Casino in 2002 as the promotions manager,” she says.

“As executive director of marketing, I oversaw the promotions, bus and special events department for Seneca Niagara and Seneca Buffalo Creek for many years, which strengthened my skills, and helped me understand the differences in clientele,” she says.

A handful of mentors helped pave the way for Williams, including Vice President of Marketing Jim Wise. “Jim was so personable and passionate about his job. He really showed me how to be a true leader and never forget where you started. He wasn’t afraid to step in anywhere and help,” she says.

The late Valerie Harlan had a way to brighten a room with her laughter, her passion and her tenacity, Williams says. “No matter how hard the day or night was she always has a smile. She showed me that a smile can go a long way.”

Melissa Free, the current senior vice president of marketing, gave Williams the opportunity to branch out and into other marketing areas. “She has trust in my leadership and guidance,” she says.

A new era is on the horizon, Williams says. Seneca Niagara Resorts & Casinos is undergoing renovations to enhance what will become a True Seneca Signature Resort Destination. “The organization will create a true sense of arrival, creating that wow factor,” she says. “We want our guests to see the immediate visual impact upon arrival to the property. Adding a sense of excitement and anticipation cascades all the way through the newly renovated lobby.”

The finished product will leverage marketing to a whole new level, she says. “Marketing will be able to showcase the top of the line and stay competitive.”

Williams’ two younger brothers struck a competitive chord in her life. “Being the only girl, I knew I had to beat at least one of them or both in everything we did,” says the mother of three, who devotes her precious spare time to watching her children play baseball, lacrosse and soccer, and when it comes to herself, running, lifting weights or basketball.

For those interested in the industry, Williams urges them to get a college degree.

“College is where you develop true independent skills. College challenges you to prioritize, to make choices (good and bad).”

Opportunities abound for an industry she describes as exciting and adventurous.

“The environment can change from day to day, from morning to night, and that is what keeps it interesting and allows you to figure out what your true calling is,” she says.