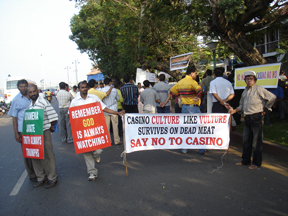 The idyllic vision of shipboard casinos languidly plying India’s Mandovi River has been disrupted of late. Recent accusations of the ships dumping raw sewage into the waterway were followed by the arrests of three casino employees accused of conspiring with “con men” to cheat their employer.

But the bigger problem facing operators is the anti-casino sentiment that seems to have reached critical mass, according to accounts in the local press.

Sindh Today reports that Digambar Kamat, Goa’s chief minister, has told the state assembly that the Goa casino policy will be reviewed, following accusations of corruption in the awarding of gaming licenses to the casino ships.

Alleged problems include some ships having sailing licenses only but still operating casinos. The leader of the opposition BJP Party also found it objectionable that, according to his claims, the vessels were registered in the Cameroon Islands and not India.

Longtime casino critic Annand Madgavkar, a local salvage expert, fears that the next generation is being threatened by the presence of a gambling culture.

“Goa is gaining a reputation around the country of being a gambling destination. Our youngsters must be taught that they should earn their money through hard work and not through dirty money,” he said, according to Times of India.

Kamat has said that changes will be made to the Goa Public Gambling Act 1976 to ensure that the offshore casinos are parked more than a mile away from the coast. But whether this will be enough for the anti-casino faction is doubtful.