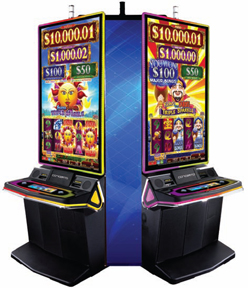 Triple Sparkle uses Konami’s popular Sparkle Feature, in which random sets of Action Stacked Symbols become framed at the start of each spin. When two complete reels land with frames, the symbols disappear and are replaced by new symbols. The Triple Sparkle game increases that to two sets of new symbols, potentially leading to huge wins, and symbol-driven progressive jackpots.

The base games are five-reel, 40-line video slots, with three bet options, each level consisting of 40 credits plus a 20-credit “Xtra Reward” ante bet—wagers are limited to 60, 120 or 180 credits. The Sparkle Feature is only active at the 180-credit maximum bet, but Aristocrat officials have said the max bet was made affordable to encourage the higher wager.

The four progressive jackpot levels are available through the Sparkle Feature—the third time the reels transform in the feature, the symbols that replace the Action Stacked symbols include symbols corresponding to each jackpot—Mini, Major, Mega or the Max, which resets at $10,000.

There also is a free-game feature that can be triggered during the Sparkle or Triple Sparkle features. A “woman” symbol on any two, three, four or five reels triggers 10, 15, 20 or 40 free games, respectively. During the features, reels with the sun symbol nudge until all positions on the reel are the sun symbol.