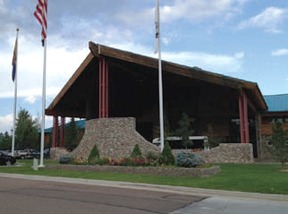 The increasingly complex world of gaming was the topic last month when dozens of tribal leaders, members of the Arizona Indian Gaming Association, gathered at the HonDah Resort and Casino in Pinetop, Arizona, for the first Tribal Leadership Retreat. Tribal chairmen and chairwomen, along with many members of the tribal councils, from all tribes across the state were guests of the White Mountain Apache Nation.

Organized by new AIGA Executive Director Valerie Spicer and Generation Seven Strategic Partners, led by former Salt River Pima Maricopa Nation President Ivan Makil, the tribal leadership retreat was designed to give an overview of the challenges and opportunities of today’s gaming industry. Like many states, Arizona has issues with increased competition, calls for commercial gaming, and questions about the viability of internet gaming.

The retreat opened with an honor dance by young men of the White Mountain Apache Nation followed by a welcome from tribal Chairman Ronnie Lupe.

Ten years of tribal gaming in Arizona was outlined, with a national perspective offered by Dr. Katherine Spilde, the director of the Sycuan Institute on Tribal Gaming at San Diego State University, and the Arizona angle delivered by Kristin Boilini, CEO of Boilini and Associates, a lobbying group that has been involved with tribal issues since the beginning. Speakers explained how the Arizona gaming law came to be and what the strategies of the participants were at the time.

Later in the day, Washington state Rep. John McCoy, a member of the state’s Tulalip Tribe, offered his expertise to explain how his tribe has become a powerful political and economic force in western Washington.

Global Gaming Business Publisher Roger Gros and Jeff Voyles, a gaming professor at SDSU, explained trends in the industry, including new technology, the continued impact of the bad economy, new competitive pressures and the potential challenges and opportunities of legal i-gaming to the industry.

On the second day of the conference, the site moved to the Sunrise Resort in Greer, a ski resort high in the mountains. Strategy sessions were held with the leaders who considered what they had heard the previous day. Officials considered the role of AIGA, as well as an affiliated organization, Arizonans for Tribal Government Gaming, and how they can become more proactive in protecting an industry that is crucial to the economic well-being of the tribes and others who depend upon it.