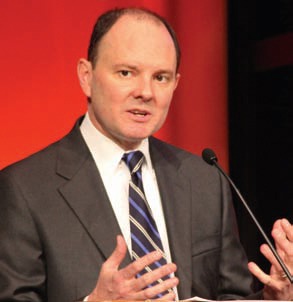 Tribal government gambling continues to make a significant positive impact on the social and economic progress of American Indians, though it has “hijacked” the debate on newly acquired lands for casinos, Assistant Secretary for Indian Affairs Kevin Washburn says.

Resources from the $28 billion Indian gaming industry have helped the 240-plus tribes with casinos fund health care, education, law enforcement and other government programs, Washburn told attendees at the April conference of the National Indian Gaming Association in San Diego.

“We’ve come a long way in 30 years,” Washburn said in a keynote address to attendees at last month’s Indian Gaming tradeshow, a time span that began with reservation gambling and passage in 1988 of the Indian Gaming Regulatory Act (IGRA). “I don’t think 30 years ago anybody would have dreamed we’d be where we are today.”

In a pre-speech interview with GGB magazine, Washburn said tribes have benefited greatly from casino revenues, which generate about 10 times the budget for the Bureau of Indian Affairs (BIA).

“Everything (Interior) works for is better resourced at the tribal level because of Indian gaming,” he said.

But he reiterated a concern expressed when he was appointed by President Barack Obama in 2010 that gambling has to a degree “hijacked” federal policy on Indian gaming, particularly in placing land in trust for tribes.

Anti-gambling sentiment has blocked efforts to get a congressional fix to the 2009 U.S. Supreme Court in Carcieri v. Salazar, which hinders Interior efforts to place land in trust for tribes not deemed to be “under federal jurisdiction” with passage in 1934 of the Indian Reorganization Act.

A number of Democratic senators and others in Congress oppose a legislative fix that does not include amending IGRA provisions on newly acquired lands for casinos.

Anti-gambling groups, along with political leaders and some tribes, have also pushed back against Interior attempts to amend regulations dealing with the official acknowledgement of Indian groups as federally recognized tribes.

“Gaming is a distraction for some members of Congress and others,” Washburn said.

Washburn said he will continue to push for changes in Interior’s tribal recognition regulations despite a letter from some members of the House Resources Committee asking him to extend the period for public input into the process.

“We’ve not given up the effort,” Washburn said. “We’re still working diligently on trying to improve the process.

“That’s a process that doesn’t have very much to do with gaming,” he said, noting that of 51 applications to the Office of Federal Acknowledgement (OFA) since it was established in 1978, 34 were rejected.

Indigenous groups have long regarded the OFA process as being unfair, with millions of dollars in legal fees and research and decades of bureaucratic delays often leading to unjust determinations.

But there are tribes—notably the Cherokee Nation in North Carolina and Oklahoma and some California tribes—who caution that lowering standards for federal recognition could diminish tribal legitimacy and reduce congressional funding for indigenous programs.

Washburn also expressed some optimism about getting a legislative fix to the Carcieri ruling.

“Congress has changed, and there will be new people looking at a fix, and we’re anxious for that,” Washburn said. “Any time you get those dynamics, things change. I am hopeful that with a fresh set of eyes we will get a fix. I would say hopeful rather than certain.”

Most of the concern expressed by congressional leaders is that state and local governments lack input in Interior’s land-trust process for casinos.

“When we explain the process… they are always surprised at how much input state and local governments have,” Washburn said, including participation in National Environmental Policy Act (NEPA) reviews.

“That leads me to think they’ve been misled somewhere along the way. There’s misinformation out there about land into trust. There are always political concerns in any proposed Indian development, especially when it involves Indian gaming.”

Despite the hardships created by Carcieri and other casino-related litigation—such as Salazar v. Patchak and Big Lagoon Rancheria v. California—Interior under the Obama administration has processed more than 1,800 land-trust applications for nearly 300,000 acres, ending a virtual moratorium on decisions under the Bush administration.

Only 18 of the applications were for casinos, Washburn said.

Skibine said there was also push-back in the agency for placing newly acquired land in trust for casinos.

“Both secretaries (Norton and Kempthorne) were not really enamored with Indian gaming,” Skibine said.

Placing land in trust for tribal governments heads a myriad of accomplishments by Interior under the Obama administration that generated a standing ovation from tribes at the conclusion of Washburn’s keynote address.

Many Interior reforms began with Secretary Ken Salazar and Washburn’s predecessor, Pawnee Larry Echo Hawk, who resigned in 2012 to become general authority of the Church of Jesus Christ of Latter-day Saints. Salazar has since been replaced by Interior Secretary Sally Jewell.

Washburn, an Oklahoma Chickasaw, said settling Cobell litigation was crucial in Interior successes on a litany of Indian issues.

“Getting that (Cobell litigation) settled was hugely important for Indian Country,” Washburn said. “You can’t serve people at the same time you’re litigating against them.”

Obama also appointed a number of Native Americans to key positions in the administration. They include Navajo Hilary Tompkins as Interior solicitor. Tompkins worked with Washburn and Deputy Assistant Secretary Larry Roberts, a Wisconsin Oneida, in developing an administrative system to work within the legal constraints of the Carcieri decision.

Navajo Charles Galbraith was named associate director of the White House Office of Intergovernmental Affairs and Cherokee Kimberly Teehee was made senior adviser on domestic policy. Teehee was succeeded by Jodi Gillette, a citizen of the Standing Rock Sioux Tribe.

Those and other appointments mean Indian issues are no longer the sole province of the BIA.

“We really want that to keep going forward,” Washburn said of the annual event. “That has really improved communications with the federal government.”

“There have been guidelines, but the guidelines aren’t enough,” he said. “Regulations are enforceable.

“We’re still losing far too many children from Indian reservations and Indian communities,” he said of federal adoption policies.

Washburn in his pre-keynote interview expressed support and confidence in the National Indian Gaming Commission, the federal regulator for tribal casinos. He rejected criticism from Congress and others that the NIGC is not adequately policing and providing leadership to the industry.

“I think the NIGC has done a great job helping establish a really good relationship with tribes,” Washburn said of agency officials. “They’ve been giving tribes technical assistance so they can achieve compliance, and that’s been going well.

“That’s what you want from a regulatory agency. You don’t want a ‘gotcha’ type system, but when necessary the NIGC has taken action to close a casino.

“There’s not a parade of horrible tales about things going on” with tribal gambling, Washburn said. “People cannot point to a bunch of serious problems that the NIGC hasn’t addressed.”

As the Obama administration comes to a close, Washburn hopes Obama policies can move forward.

“We have a lot of priorities,” he said. “One of them is institutionalizing all the things we’re doing to make sure they are carried forward into the next administration.”

The leveling-off of tribal casino revenues, which began before the 2008 recession, is of some concern to the assistant secretary. But he’s confident the industry remains strong, despite indications of market saturation.

“Growth is always better,” Washburn said. “But it (gaming revenues) plateaued at a very high level and it’s providing a lot of resources in Indian Country.

“I’m sure every one of those tribes would like more revenue and more resources so we can do more for our citizens.”

Interior and the BIA operate in a “perpetual crisis mode,” Washburn said, which during the week of the NIGA convention included an ongoing teenage suicide epidemic in Lakota’s Pine Ridge Indian community and a wildfire on the Rosebud Sioux reservation.

“There’s always going to be a need for more resources. Poverty is just a fact of life in Indian Country,” Washburn said.

“What I see, day to day, is that tragedy rides side by side with poverty. There’s a lot of tragedy in Indian Country, and a lot of it is due to poverty.

“But we have not come anywhere near solving it.”