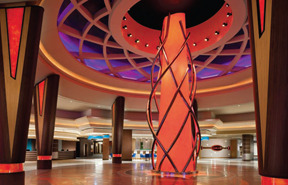 American Indian tribes currently investing millions of dollars upgrading and expanding hotel-casinos in an effort to cope with a slow-growth gambling market are now being told the upcoming generation will not be enamored with the slot machines on their casino floors.

Recent studies, including polling by equipment manufacturers and the American Gaming Association, the industry’s trade group and lobby, indicate millennials may have a lower propensity to gamble than their parents and grandparents.

And experts believe the 350,000 slot machines now found in most tribal casinos will not be their game of choice.

Millennials, according to a flood of newly released surveys and research, are more interested in social internet and skill-based games such as poker and fantasy sports, wagering that can be conducted on their smartphones.

Younger gamblers also tend to gravitate to table games, such as blackjack, which are labor-intensive and often generate less than 10 percent of a tribal casino’s revenue.

The millennial gambling profile poses a challenge to an industry largely profiting from post 45-year-olds willing to pump their discretionary income into traditional slot machines that contribute 90 percent of a tribal casino’s income.

“Tribes are relying on a demographic that is dying right now,” says Jana McKeag, president of Lowrie Strategies of Alexandria, Virginia. “Tribes need to reach out to the millennials, the next generation. They need to think far enough ahead.”

Statistics on the wagering propensity of millennials are catching tribal governments and their economic development agencies somewhat by surprise. Many have only recently made millennials a topic of internal strategy sessions.

“There is a lot of dialogue taking place on the topic of millennials, believe me,” says Janie Dillard, executive director of gaming for the Oklahoma Choctaw Nation, operators of seven casinos and a number of slot outlets. “That’s the big issue.

“It’s no longer just granny or mom sitting at a slot machine. Those people are dying off.”

“That’s exactly the conversation we’re having internally, right now,” Mike Goodrich, general manager of the Potawatomi Hotel & Casino near Milwaukee, Wisconsin, says of millennials. “We’ve been having that conversation for what, six months now?”

“This has just come up in the last couple of months,” says Jamie Stuck, vice chairman of the Nottawaseppi Huron Band of Potawatomi, owners of FireKeepers Casino Hotel near Battle Creek, Michigan. “We’re looking at all our options.”

“In another two decades we’re really going to have to rethink our whole gaming product,” says Derrick Watchman, CEO of the Navajo Nation Gaming Enterprise, operators of four reservation casinos, including the flagship Twin Arrows Casino Resort near Flagstaff, Arizona.

In some respects, the focus on millennial gamblers in Indian Country is coming at an opportune time.

Tribal governments are spending hundreds of millions of dollars expanding and renovating casino and hotel facilities in an effort to bolster a highly competitive but lethargic gambling industry that for many indigenous communities is a primary source of services to their citizens.

After nearly two decades of double-digit growth since passage of the Indian Gaming Regulatory Act (IGRA) of 1988, yearly revenue increases from 2010 to 2013 averaged 1 percent to 3 percent, leveling off at about $28.5 billion. The slow growth has constricted revenue for government services.

Studies indicate that millennials are likely to spend more on food, booze and entertainment than they drop at the tables and slot machines.

“More than ever before, casinos are making enormous investment in non-gaming amenities such as clubs, spas, restaurants and shows,” AGA spokesman Justin Zink told Elaine S. Povich of Stateline.org.

Unlike commercial casinos generating profits to fatten shareholder portfolios, tribes see hotels and additional amenities as a means of evolving their casinos into broad-based hospitality and tourism enterprises better equipped to ensure a more sustainable source of government revenues.

“Tribes are looking at more amenities,” James Klas, founder and principal of Klas Robinson Hospitality Consulting, says of the growing evolution of tribal casinos into what are termed fully integrated resorts.

Tribes are looking hard at resorts on the Las Vegas Strip, which generate upwards of 65 percent of their revenue from hotel accommodations, restaurants, entertainment, retail sales and other non-gambling amenities. Only about 11 percent of tribal gambling industry revenue nationwide is coming from off the casino floor.

“The trend I’m seeing is the creative use of facilities and the social media to reach out to new and younger market segments,” says Steve Rittvo, chairman and CEO of the Innovation Group, an international gambling and hospitality consulting and management company.

“You’ve got to reach down to a younger demographic. The facility has to be a little more club-centric and a little less baby boomer-resurrection entertainment. You’re not seeing the old bands as often.”

The Potawatomi bands of Battle Creek and Milwaukee are two of dozens of tribes that have recently completed new and expanded hotels in an effort to drive more business to their casino floors.

The FireKeepers hotel and events center opened in 2012 with 242 rooms, drawing guests from a region extending from Detroit to Kalamazoo. Forest County Potawatomi opened its 380-room hotel, spa and Northern Lights Theater last year. Both properties have restaurants and convention and meeting room space.

With the leveling off of the gambling market, most of the work for the industry’s architects is with casino expansions, hotels and non-gaming amenities.

Few tribes are razing their inaugural casinos and opting for new construction, preferring instead to renovate or expand the existing facilities.

“Tribes are prudent,” says Nick Schoenfeldt, vice president of Thalden Boyd Emery Architects. “They never want to tear anything down. Once they build it, they want to keep it.

“Market saturation is starting to occur. So the effort now is how to make the place unique, to design something that relates to the tribe’s heritage.”

Tribes are astute in their non-gaming investments, opting to do projects such as covered parking and restaurants that easily translate to revenue from the casino floor rather than golf courses and nightclubs which may seem attractive but in many cases don’t help the bottom line.

But some can’t resist the flash.

“In Indian Country there is not a settled opinion on things. Tribes are fairly cautious. They don’t usually go leaping into things.”

Tribal governments also are accelerating efforts to use resources from gambling to diversify their business portfolios far beyond gambling. It was, after all, the congressional intent of IGRA for tribes to use gambling resources to strengthen governments and build diversified economies.

Navajo’s Twin Arrows Resort Casino in rural Coconino County, on Interstate 40 halfway between Flagstaff and Winslow, is envisioned as the anchor for the Outlook at Glittering Mountain, a 70-acre residential, business and entertainment development.

The tribe’s three other casinos in Gallup, Shiprock and Farmington, New Mexico, may also serve as anchors for hotels and other amenities.

“We’re corroborating with other Potawatomi EDCs (economic development corporations) to see how we can all work together to diversify our economies,” Stuck says. “We’re at the blueprint stage. We’re just now having our preliminary meetings to discuss our options.”

The Oklahoma Choctaw Nation employs 6,000 workers in manufacturing and management services companies along with its seven casinos, 13 travel plazas and 12 smoke shops. The tribe is looking to branch out further with lumber businesses, grocery stores and franchise restaurants.

The Choctaw’s flagship hotel casino in Durant recently expanded to 660 hotel rooms with a spa and wellness center, and just put the finishing touches on “The District,” an entertainment venue with theaters, bowling, laser tag and a sports bar.

“We’re trying to drive more weekday traffic with that,” Dillard says of the resort, which draws visitors from the Dallas-Fort Worth, Texas, corridor. “We’re packed full on weekends.”

The Choctaw Nation may add yet another 500 rooms to the hotel, and is contemplating a shopping center.

“We’re definitely moving on with our master-planning,” she says. “We want to move in a major retail development.”

Recent studies by the Association of Gaming Equipment Manufacturers (AGEM) show millennials are not interested in devices equipped with random number generators, or RNGs. Slot wagering in Nevada has fallen 23 percent from an all-time high of $138 billion in 2006.

A few devices incorporating elements of skill and chance intended to jump-start the machine industry were unveiled at the September G2E conference and trade show. Others are being devised by teams of technicians, mathematicians, designers and sound experts with the industry’s top manufacturers.

“We have a specific group within our gaming studios full of talented folks with the assignment to look at that skill-based space and millennials and come up with concepts attractive to the generation,” says Knute Knudson, vice president of International Game Technology.

“I’d be surprised if all our competitors don’t have similar groups.”

Tribal governments since the late 1980s have been on the cutting edge of slot machine innovations such as multi-denomination devices and cashless gaming. Some believe Class II electronic bingo machines are more conducive to skill-based gaming than RNG devices.

About 45 percent of the 9,800 electronic slot machines at the Choctaw casinos, travel plazas and other gambling venues are Class II devices that have undergone major technological advancements over the last decade.“We have the most creative floors and the most vibrant floors anywhere,” Dillard says. “We’re very unique.”

Knudson and others envision a revolution on the casino floor.

“With the millennials it’s all social,” Dillard says. “They want to play in groups and play against each other. They want to take pictures of each other on games and put it out on social media.

“I see the floors changing so much. I don’t see straight lines with just slots. There’s going to be some banks of slots, but you’ve got to be creative with the floors.

The transition will not be sudden. Casino management is still targeting a niche satisfied with the games on the floor. And some slot operations people are averse to making abrupt player marketing changes to accommodate a group they believe is not lucrative.

“Millennials don’t have any money,” groused a slot director at G2E who asked that he remain anonymous.

“We listen to our guests, and we deliver what they want,” Goodrich says. “Regardless of what you and I think, it’s our guests who come in and pay our bills for us.”

“I think we have a decade before we get a significant millennial population in the casino,” Stuck says. “My customer base—as it is throughout most of the country—is 40 to 60 years old. I’ve got a lot of people who still like the older machines.”

The slot evolution will be gradual.

“You and I are going to see the beginnings of this transition,” says Randy Carnett, consultant to Ortiz Gaming and principal in Pineapple Ventures, Ltd. “This is going to play out over the next 10 years. It’s going to take a while for the industry to understand what the goals should be—they’re pretty fuzzy now—and then trying to work toward them. It’s going to be really, really challenging.”

“I do believe millennials are an age group we all have to work with,” Dillard says. “We all have to figure them out. I want to know what makes them tick.”

“Tribal leaders have a fiduciary duty to be innovative, to be proactive, to understand the business environment,” Knudson says. “They need to know where their business is going and what outside influences are impacting their business.

“In any business environment—I don’t care what the business is—one cannot remain static. You always have to be innovative.”